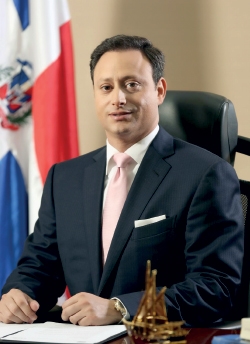 Jean Alain Rodrí­guez has long experience in both the public and private sectors, specializing in international law, regulations, and commercial law, and is a distinguished spokesman and promoter of the Dominican Republic on the international scene. From 2005 until appointment to his current position in 2012, he was the Executive and Legal Director of Domicem and Managing Partner of law firm JAR & Associates, specializing in investment, trade, and industry. On the academic front, he was Professor of Commercial Law at Universidad Iberoamericana (UNIBE) and at the Pontificia Universidad Católica Madre y Maestra (PUCMM), remaining in the latter as an active teacher for more than a decade. He holds a PhD in Law from the University of Rome.

Share on:
It is important for the Dominican Republic to abandon boom and bust cycles and aim for stability. What evidence of stable growth have you witnessed over the past year? The […]

It is important for the Dominican Republic to abandon boom and bust cycles and aim for stability. What evidence of stable growth have you witnessed over the past year?

The remarkable performance in the Dominican Republic’s economy and the competitive advantages of doing business here have provided increased flows of FDI into the productive sectors nationwide. Furthermore, foreign investment has been one of the main driving forces of the Dominican economy in recent years, due largely in part to the macroeconomic stability and the positive growth rates that have been sustained, transforming the country into one of the strongest economies in the Caribbean and one of the most important in the Latin American region. During 2012, the Dominican economy grew 3.9%, exceeding the regional average (3%) and the average growth of the world economy (3.1%), according to the IMF. Favorable export performance, which saw an increase of 5.4% compared to 2012, was also recorded. Thanks to legal assurance and economic stability, and the benefits of the country outlined in a strategy developed by our President, Danilo Medina, our country was recognized by the Financial Times for the year 2013/2014 as having the second best strategy in the Caribbean and Central America to attract foreign investment. Similarly, according to the Global Competitiveness Report 2013/2014, recently published by the WEF, the Dominican Republic is positioned in 11th place after evaluating 148 countries worldwide in terms of FDI and transfer of technology, which demonstrates the quality and impact on the local economy of investment flows into the country.

What recent reforms has the government put in place to promote exports?

In accordance with Law No. 488-08, which establishes the Regulatory Regime for the Development and Competitiveness of Micro, Small, and Medium Enterprises (MIPYMES), published on December 30, 2008, and strategic development guidelines from our President, Danilo Medina, the Dominican Republic is focused on promoting opportunities for small businesses, and small business development centers (SBDC), for their insertion into global markets, such as financing, integration, associative practices, and capacity building. Such businesses now represent 90% of our total economic structure and job generation. Specific efforts have been put into agribusinesses.

The creation of an Export-Import Bank in the Dominican Republic, a project that seeks to facilitate access to credit by providing financial inclusion and democratization of credit, is considered to be one of the priorities in terms of presidential goals. The promotion of exports and investments is coordinated by the CEI-RD and the Ministry of Foreign Affairs. In addition, a committee has been established to follow up on pesticide residue and other contaminants, which occur in agro-exports to the US and EU. As a result of this initiative, during the first trimester of 2013, the number of rejected containers was reduced by 33% in comparison to the same period of 2012.

“ Mining is also significant, and in the first decade of this century it has been one of the most attractive activities for the reception of foreign investment in the Dominican Republic. “

How strategic are the completion and implementation of free trade agreements (FTAs) for the improvement of economic exchanges?

Free trade presupposes a flow of imports and exports without restriction, and gaining market access or preserving existing preferences has remained a key motivation for signing FTAs. However, with the liberalization of trade around the world and the related diminishing size of preferential rents, the growing success of FTAs cannot be explained by the traditional market access motive alone. There is interest in a host of objectives, including importing higher policy standards, strengthening regional policy coordination, locking-in domestic reforms, and even addressing foreign policy issues.

What is the potential for investment and trade in the region?

The Dominican Republic has preferential access to more than 882 million consumers worldwide. Through our FTAs, we have negotiated favorable and flexible rules of origin, which offer a tremendous advantage for companies doing business in our country. We are one of only six countries in the world with FTAs and preferential market access to the US, through CAFTA-DR, and the EU, through EPA, with flexible rules of origin. The other five are Mexico, Chile, Morocco, Jordan, and Israel. The Dominican Republic offers a great diversity of business opportunities, where you can earn excellent returns on your investment and generate wealth and prosperity. One of these sectors is tourism. In the mid 1980s, the Dominican Republic began to go through a transformation in its productive structure that defined the process of outsourcing and services. From that moment, our country began to develop other non-traditional sectors, such as tourism, which has been allocated significant amounts of foreign investment. In the last 12 years, FDI in the tourism sector amounted to $2.7 billion, representing 12.4% of the total amount registered in the country. Other sectors include real estate, which has provided substantial contributions to the Dominican economy in recent years, both as a source of employment and foreign exchange generator. Mining is also significant, and in the first decade of this century it has been one of the most attractive activities for the reception of foreign investment in the Dominican Republic. The trade and industry sector has also been dynamic in recent years due to increasing labor and productive development, which has generated significant flows of FDI. During the 2000 to June 2013 period, investment in this sector represented 19.6% of the total amount received by the country, at $4.28 billion. ICT also attracts foreign interest. During the 2000 to June 2013 period, FDI attracted by this sector amounted to $2.34 billion. The Dominican Republic has also emerged as a contact center and business process outsourcing (BPO) hub. The contact center industry is one of the fastest growing sectors in the Dominican Republic. Currently, it has been estimated that there are 33,000 agents employed in the industry and approximately 27,400 seats. The projections are that the sector will grow by over 80% over the next five years, anticipating that more than 60,000 agents will be employed in the industry by 2016.

How will the government vision to further develop infrastructure, together with the widening of the Panama Canal, impact the Dominican Republic’s logistics industry?

The strategic location of our island in the center of the Caribbean represents a historic opportunity, which, from the times of the discovery of America, has allowed it to serve as a trade hub and a nerve center where imports and exports converge. This permanent historical advantage is being strengthened by the expansion of the Panama Canal, scheduled for completion in 2015, which will generate the kind of traffic never before seen, including mega post-Panamax and super-Panamax ships, radically changing the dynamics of freight. With the opportunity of transshipment and new marine routes in our vicinity, the Dominican Republic is ready to face the challenge at an optimal leverage, especially through our exports. The Dominican government, through the CEI-RD, has designed a working plan to implement the necessary tasks and promote our country as a hub in the Caribbean, allowing us to achieve the desired levels of development. We have evaluated and visited the main hubs around the world and, based on this benchmarking, have been able to implement the best model in the Dominican Republic. Another factor to have had a positive impact on the development of this hub is the country’s modern and efficient transportation network that enables reliable cargo shipment and travel, as well as its excellent system of roads, nine international airports, several domestic terminals in important commercial locations, four cruise ports, and 12 modern cargo ports, including DP World Caucedo, one of the 25 largest ports in the world.

Meanwhile, the Dominican Republic, the number one tourism destination in the Caribbean, also received more than 4.5 million visitors during 2012, generating revenues of over $4.5 billion.

How do you evaluate the main drivers of the economy in the Dominican Republic for the coming years?

In spite of the fact that, currently, international markets are undergoing some fluctuations caused mainly by uncertainty generated in a few developed economies, the main economic drivers of the Dominican macroeconomic landscape suggest positive results in the medium term. According to the projections of Plan Nacional Plurianual del Sector Público 2013-2016, developed by the Ministry of Economy, Financial Planning, and Development, we can anticipate annual average GDP growth of 4.5% during the analyzed period. Regarding employment, average growth of 2.8% is expected by creating around 461,000 new jobs.