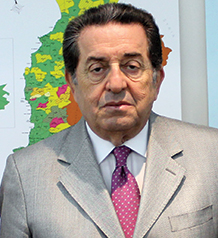 HE Boutros Harb was born in 1944 and graduated with a degree in French and Lebanese law from Saint Joseph University in 1965. He became an elected member of Batroun Caza in 1972. He has held a number of ministerial positions and is currently Minister of Telecommunications.

Share on:
TBY talks to HE Boutros Harb, Minister of Telecommunications, on the ministry's vision for fiber optics, expanding 4G coverage, and privatizing Lebanese mobile carriers.

What is the current state of the ministry’s plan to have full fiber-optic coverage by 2020?

The FTTX project is running on schedule. According to the plan, the first year was dedicated to enhancing DSL services in remote areas in preparation for these areas to have fiber-to-the-cabinet (FTTC) services, as well as providing some pilot “heavy users” with fiber-to-the-building. The pilot phase of the FTTC is being implemented according to schedule and we will now start the fiber-to-the-home (FTTH) pilot in dense areas where the need for high broadband has been expressed. For the 4G (LTE-A), mobile service implementation is to be finalized by end of September 2016, with a full coverage to be launched before the end of the year. In order to accelerate the accessibility to high-speed internet before the full deployment of fiber, I am considering launching special packages using 4G technology as an interim solution that will be used as a last mile connectivity in areas where fiber will take the longest time to be completed. We will finance these developments using revenues collected from our various services such as mobile telephony through both mobile operations, as well as from fixed phone and DSL, which provides the necessary funding for these investments. Implementation will be done in phases, specifically for FTTX, whereby the funds will be allocated on a pay-as-you-implement mode, which will be spread over four to five years. Also, each additional service will provide additional revenues, which in turn will fund the next phase of the project. The 2020 Vision creates new dynamics both on the social and economic front.

You have been an advocate of the expansion of 4G connectivity throughout Lebanon. How will internet users benefit from this expansion?

There are plans to make 4G available in all areas of the country before the end of 2016 and cover major cities by the end of September of 2016. I have asked all 4G suppliers to commit to our requested timeframes and the rollout is working according to plan. I have personally followed up this project and regularly meet with the concerned teams to receive updates and solve the difficulties that crop up. On the other hand, pricing is currently being studied in order to accompany our plans and fit our 2020 Vision. The users will therefore benefit from a faster and wider coverage of high speed internet with more affordable pricing.

A project to privatize the main two mobile carriers has been in the air for several years. Is this plan achievable in the mid term, and what would be the key benefits of this?

In 2002, we issued Law 431, which, among other things, stated the creation of Liban Telecom, a semi-private company that would take over all the fixed telecoms infrastructure and start a third mobile operator. Law 431 has been signed and approved but unfortunately only partially applied, since it still needs some amendments to update its legal frame and implementation decrees. With the current vacancy at the head of the country, this is impossible to achieve. I have shown my inclination for the application of this law and am working hard for its full implementation. Once Law 431 will be fully implemented, competition would be further enhanced and will improve the creativity of the operators while delivering higher quality of service in compliance with international standards. The customers will, therefore, benefit from better service at reduced prices allowing them to better focus on the development of their own activities.