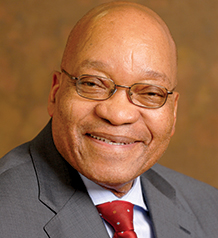 Influenced by a trade unionist family member, Jacob Zuma became involved in politics at an early age, joining the African National Congress (ANC) in 1958. He became an active member of the ANC’s armed wing, Umkhonto we Sizwe, in 1962, following the banning of the ANC in 1960. While on his way out of the country in 1963, he was arrested and sentenced to 10 years’ imprisonment. He left South Africa in December 1975 and for the next 12 years was based in Southern Africa. Following the unbanning of the ANC in February 1990, he was one of the first ANC leaders to return to South Africa to begin the process of negotiations with the then apartheid regime. In 1991, at the first ANC conference held in South Africa since 1959, he was elected Deputy Secretary General. He was elected ANC Deputy President in December 1997, and served as Deputy President of South Africa from 1999 until June 2005. Zuma was elected ANC President in December 2007, becoming the ANC’s candidate for South African president in the 2009.

Share on:
TBY talks to Jacob Zuma, President of the Republic of South Africa, on the country's trade relationship with Turkey.

Bilateral trade between Turkey and South Africa was over $2 billion in 2013, chiefly in the mining and textile sectors. How has trade grown between the two states since then, and which areas of trade have proven the most important?

What are some of the most beneficial aspects of the trade relationship between South Africa and Turkey?

Turkey has a wealth of knowledge in the clothing and textile industry as well as the mineral beneficiation and jewelry sectors. Turkish companies will benefit from the need for South Africa to process its wealth of minerals into value-added products, to be utilized domestically or to be exported. Turkish experience in the machinery, textile, and construction industries can help the South African economy develop even faster.

How can South Africa facilitate access to the rest of Africa for Turkish investors?

Economic relations between South Africa and Turkey are governed by the South Africa-Turkey Joint Economic Commission (JEC). The primary objective of the JEC is to promote and deepen bilateral trade and economic cooperation between the two countries. Trade and Investment South Africa just recently signed a MoU with ISPAT, the Turkish investment promotion agency. The objective of the agreement is to support investors from our respective countries with targeted projects. It is widely recognized that Africa is on a new growth trajectory. The continent has chosen an industrialization path driven through regional integration, infrastructure development, mineral beneficiation, and developing the agricultural value chain. Turkey already has a strong presence on the continent and by forging partnerships between companies from our two countries, and we can make an invaluable contribution to these objectives. South Africa is strategically positioned to serve as an entry point into the rest of the African continent for Turkish business. Cooperation and partnership between us will ensure that we contribute toward the promotion of the continent’s interests, at both the regional and global levels.