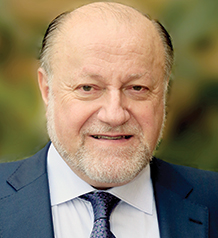 Armand Pahrés has been President of LPIA since 1988 and has played a major role in the regulation of the marketing and trading of pharmaceuticals. He is also Chairman and Managing Director of Mercuphar Group of Companies and is active in the fields of marketing and sales of pharmaceuticals, consumer care products, and medical supplies in Lebanon, Syria, and Africa, with over 38 years of experience in these fields. Phares holds a PhD in mathematics from Paris VI University and an MBA from INSEAD. In 2010 he was selected by INSEAD as one of its 50 alumni who changed the world.

Share on:
TBY talks to Armand Pahrés, President of the Lebanese Pharmaceutical Importers Association (LPIA), on the development of legislation in the sector, boosting further innovation, and opportunities for Lebanon to become more self-sufficient in pharmaceuticals.

What is your assessment of the legislation on pharmaceutical commercialization in Lebanon?

The legislation in the pharmaceutical sector has developed in a rather positive way due to the close cooperation between all stakeholders in the public and private sectors. The LPIA has taken an active role in the process of laying out the necessary laws, decrees, and ministerial decisions to structure a regulatory framework that works according to the sector’s needs. Today, we have a regulatory framework that is well advanced in comparison to neighboring countries. Moreover, the pharmaceutical sector in Lebanon is probably the best-regulated sector after the banking sector. However, the major problem comes from the modernization and application of the regulations, which is where we need bigger efforts today.

How has LPIA contributed to the development of R&D in the Lebanese pharmaceutical industry?

R&D is practically nonexistent in the pharmaceutical industry in Lebanon. The small spheres where it is actually present are at the level of a few manufacturing sites and the development of some generics manufactured under license from multinationals or locally packaged to be sent abroad in an economy of scale model. Even though LPIA has no direct contribution to this development process, we encourage the regulatory measures to facilitate such developments and remove the various barriers to entry put in place by neighboring countries against Lebanese pharmaceuticals.

How is the sector working with local start-ups and SMEs to innovate in the industry?

The profession of importing and distributing pharmaceuticals is being challenged in two opposite directions: one being demanding but rather conservative that addresses the good storage and distribution practices in an advanced and complex way; and the other, even more demanding and forward looking, calls on all players to be creative and prepare themselves to face the challenges of bio-pharmaceuticals and patient-oriented therapies. There are start-ups already developing niche services in the industry, although they still represent a minor role when looking at the whole picture of the health sector.

Are there many opportunities for the commercialization of generics in Lebanon?

In 2014, generics constituted 34% of the market in units and 27% in value. This is a great percentage given that the prices of generics are lower than the prices of originators. The awareness campaign initiated by the Ministry of Public Health with the application of the provisions of the law allowing a pharmacist to substitute, in specific cases, the medicine prescribed by the doctor and the introduction of the unified prescription has had a positive effect in this respect. Nevertheless, the eagerness of most multinationals to reduce the prices of their originators after their patent rights expire does not facilitate the penetration of generics, leaving them with relatively low market shares.

What opportunities are there for Lebanon to become more self-sufficient in terms of pharmaceuticals?

Lebanon is a small market that faces problems getting its locally produced medicines into neighboring countries and low levels of investment to develop a local pharmaceutical industry. That being said, the Ministry of Health has established a policy to coordinate with big multinationals to create a good balance between high-quality products and fair and affordable prices. The timeline to get prices down is also being kept under control so that all stakeholders will reach a fair understanding on how to balance the benefit-cost of having such early access to medicines.

What are your projects to take the work of LPIA even further?

Our objective is to keep cooperation at its highest professional level between private stakeholders—multinationals, local manufacturers, pharmacies, hospitals, and doctors—and the public sector, represented by the Ministry of Health and public institutions. We want to have the regulatory framework moving ahead with modernization and efficacy. On a practical level, we have four immediate projects that are being finalized: the execution of good storage and distribution practices, the signature of the newly updated Code of Promotional Practice, the introduction of a national barcode system on all medicines, and the destruction of pharmaceutical waste through an environmentally accepted method.