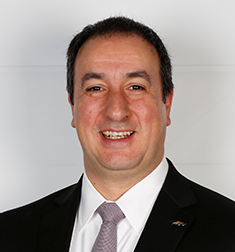 Paris Pavlou was appointed President and Managing Director of General Motors Andina in January 2017. Prior to this, he was the President and Managing Director of General Motors Argentina, Vice President of Global Purchasing and Supply Chain for General Motors South America, and Executive Director of the Global Powertrain Operation for GM. Pavlou graduated from the University of Melbourne with a bachelor’s in Engineering. After finishing university, he began his career at Holden purchasing electrical components and thermal systems, before expanding his role and responsibilities.

How is GM Colombia addressing the needs of the local market?

Times change and there is a lot of movement in the industry, especially in regard to customers’ needs. In response, 13 years ago we established that connectivity is an important step in the vehicles evolution. We launched Chevystar, which is based on the concept of safety. We launched five or six versions of the product and to celebrate our 60th anniversary in 2016 we took the opportunity to launch our eighth generation of Chevystar. The key difference with this latest version is the state-of-the-art hardware that allows us to read the information from all the computers in the car. The data is transmitted through the internet to our centers; therefore, we continuously monitor and understand what is going on with the car’s performance. We analyze the vehicle’s data using various algorithms. When a critical issue arises, we send that information to the customer through an app that enables the customer to set up an appointment at any of our Chevrolet assistance centers in Colombia. The system also allows the client to run the tests on their car to check if it is working well. Therefore, we are staying ahead of the trend when it comes to the internet of things. This is a major forward step for our 60th anniversary legacy.

We were forecasting an industry slightly better than 2016 (260,000 vs 253,000 in 2016) supported in the fact of a better and more stable macroeconomic background (controlled inflation, a flat COP vs USD rate, and peace agreement consolidation); however, the year didn’t begin as expected, the tax reform along with other factors, had a negative effect in the consumer confidence with historical low levels in January at -30.2. Today, we are still below the 2016 confidence levels; however, we see a positive trend and expect the second half of the year to grow at a better pace.

How do you see the upcoming tax reforms impacting the automotive sector?

The main consequence of the tax reform for us was the VAT change from 16% to 19%, it had an immediate impact on all vehicle prices and an enormous impact on the consumers (confidence index moved from -10.7 in Dec to -30.2 in January). The auto industry is highly correlated to the confidence index level.

We are projecting an industry of 243,000 vehicles for 2017, with some upsides that will come in 2H2017 In 2016, the industry end in 253,000 units and the projected 243,000 units for 2017 is a slight reduction despite the negative effects in the consumer caused by corruption scandals and Tax reform, trend. We thought 2016 was going to be similar to previous years, but it was not because the peace deal was not signed in 1Q2016 as we expected. This meant we spent eight months speculating about what was going to happen. Now, the trend has changed and can improve. The level of industry in Colombia is comparatively low, even for this region. The only markets in South America that have a similar or lower index in terms of car consumption per capita are Bolivia and Paraguay; and Argentina, Chile, and Brazil have doubled or tripled the size in terms of their car market. Those markets are at 325,000 units, or 80,000 above us. If you compare the last five years we have dropped 150,000 units, 2017 is a year where the trend is going to change, possibly reaching more than 260,000, which we are planning to recover market share. This is important because GM has been a huge leader in the Colombian market, but there have also been a lot of new entrants. Some 10 years ago there were 30 car brands competing in the market and now there are 70 brands in Colombia. Chevrolet is holding the number one position with almost 2e% of the market, and we intend to increase that share.