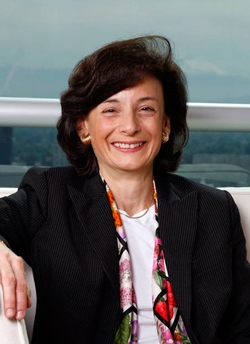 Behind the Fiscal Fence

Since joining the World Bank in 1990, Gloria M. Grandolini has held several positions, including Director of the Banking and Debt Management Department of the Treasury. She was also the Senior Advisor to the Executive Director representing Italy, Portugal, Albania, Greece, Malta, and San Marino on the Board of the World Bank Group. She has also worked as a Country Economist for El Salvador and as Senior Financial Economist for the Latin America and the Caribbean region.

Share on:
Nowadays, it is not news to say that Colombia has been putting its house in order. Politically, the country is far more stable and new peace negotiations with the FARC […]

Nowadays, it is not news to say that Colombia has been putting its house in order. Politically, the country is far more stable and new peace negotiations with the FARC are raising renewed hopes of further progress. Social indicators have continued to improve, with nearly 1.2 million Colombians lifted out of poverty or extreme poverty between 2010 and 2011.

By 2011, the country set a series of records for job generation, FDI, and export growth while keeping inflation under control. In 2012, following an impressive jump in GDP of 5.9% in 2011, Colombia’s tax revenues were up an additional 30%.

More to its credit, Colombia has been making these gains in the midst of an unfavorable international context. The global economy and market sentiment continue to be subdued, encumbered by the eurozone debt crisis, the slow recovery of the US economy, and concerns about a slowdown in economic activity in emerging markets, most notably China.

“The tax system could benefit from becoming fairer and simpler, while raising more revenues.”

There are many factors that help explain Colombia’s remarkable advances, but there is one that we at the World Bank find particularly significant and not sufficiently advertised; its fiscal soundness. Through a series of prudent fiscal reforms, Colombia has helped erect a kind of protective perimeter—a fiscal fence—that should ensure the sustainability and protection of Colombia’s recent progress.

To appreciate the significance of this fiscal fence, it is useful to consider how Colombia laid its foundation. Following the introduction of a new constitution in 1991, the size of government started to expand. Much needed public spending in health, education, and justice, however, was not matched with a commensurate rise in revenues. By the end of the 1990s, fiscal sustainability in Colombia was uncertain; central government debt was rising fast, and local governments were over-indebted.

Starting in the early 2000s, successive governments embarked on fiscal adjustment. The sovereign debt trajectory was brought under control in part through a series of revenue-raising tax reforms and changes to subnational transfers. Fiscal rules were introduced for departments and municipalities to rein in fiscal discipline. Medium-term fiscal and expenditure frameworks were implemented at a national level to help strengthen the overall direction of fiscal policy. Debt management was also shrewd, including the reduction of currency mismatch and increased use of fixed-rate paper with extended (and cheaper) maturities.

Toward the end of the 2000s, new challenges emerged: royalties paid to subnational entities were negligible in size. Buoyed by high international prices, Colombia was becoming an oil and mining nation and royalties stood to rise to 2%-3% of GDP in the coming decades. Royalties were often poorly spent and only benefitted a few producing regions.

As President Santos came to office, the first major fiscal reform that he embarked on was the development of a new royalties system, which entered into effect in 2012. In brief, all departments and municipalities now benefit from these revenues, some of which are prudently saved in a fund while global prices remain high.

While the fiscal framework had been strengthened at the national level, important challenges remained. Most importantly there were no clear targets for fiscal policy and the fiscal course could be changed by the stroke of a pen by any given minister of finance. At the same time, oil and mining revenues were rising and there were concerns about how and when to spend a possible oil bonanza of the central government.

Over the past two years, the World Bank has increasingly tied its support to the government’s fiscal reforms. Budget support worth a total of $500 million has provided a cheaper alternative to bond financing.From the perspective of the World Bank, Colombia is the new frontier where innovative financial and knowledge solutions are piloted.