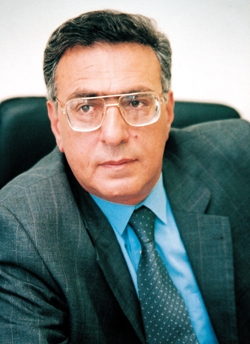 Chingiz Huseynzada has worked as sports curator in the Presidential Administration since 1993. In 1996, he was elected President of the Azerbaijan Athletic Federation. He has been the Vice-President of the National Olympic Committee (NOC) of Azerbaijan since 1997, and he has more than 20 years of experience in the field of sports. Prior to joining the NOC in 1997, he worked in the scientific-pedagogical sector. In 1998, he became Editor-in-Chief of Olympic magazine. In 2006, Huseynzada received the medal for Order of Merit from the European Olympic Committee.

Share on:
How would you evaluate the performance of the Azerbaijani athletes at London 2012? We were extremely happy with our results at London 2012. We set records in several sports that […]

How would you evaluate the performance of the Azerbaijani athletes at London 2012?

We were extremely happy with our results at London 2012. We set records in several sports that we participated in, and we also had a large team, with 53 athletes. Our team won 10 medals, of which two were gold. On the one hand, it demonstrates that London 2012 can be considered as our best Olympic performance ever, while on the other hand, one in five of our athletes were able to come home with a medal. In terms of worldwide rankings, we were in 30th place; in Europe, we were 15th; and of Islamic countries, we were third.

What efforts does the NOC make to promote sports among Azerbaijani youth?

Azerbaijan’s NOC is considered as a signatory of the Olympic Charter of the International Olympic Committee (IOC). The main aim and goal of the NOC is to promote the participation of Azerbaijani athletes in Olympic Games. It is not under our obligation to prepare athletes for the games; however, this remains the obligation of the local sporting federations, clubs, and societies. Our obligations and goals are to provide participation in the international Olympic movement. We are the liaison between national athletes and the international arena. Moreover, the Azerbaijan NOC, in closer collaboration with each national sport federation, organizes awareness-raising campaigns and events in order to draw young people’s attention to sports and by doing so to promote the importance of sports activities for a healthy lifestyle. Each national sport federation has their own sport development and promotion projects, which are planned either in the short-term or long-term perspective. As an umbrella organization, we usually support sport federations during their awareness-raising events in order to have the possibility to cover a broader audience.

What do the European Olympic Games signify for Azerbaijan?

At the very outset, let me proudly highlight that Azerbaijan is a country of “firsts.” Our country is known for its firsts from the oil sector to art, from chemistry to culture. Azerbaijan prides itself on having created the first opera in the Middle East. Azerbaijan was the first Muslim country that granted women the right to vote. Hosting the first European Games will be marked as another “first” of ours in the field of sports. Therefore, we feel delighted by hosting the first-ever European Games in the capital city of Azerbaijan. Being the first city to host the European Olympic Games means a lot for us: it means a privilege; it means an opportunity; it means new challenges. On the other hand, it is worth mentioning that these will be the inaugural European Olympic Games. There have been Oceanic Games, Asian Games, and Pan-American Games, but this is the first time that the European Olympic Games will be held. Generally, in order to prepare for such a large-scale event, one needs a minimum of six or seven years, as is the case for the Olympic Games. However, we have just over two years. Considering the time schedule, we will consider the scope of work and work hard. In time, we will come up with a sporting program in coordination with the European Olympic Committee (EOC), as well as other international committees.

“We are the liaison between national athletes and the international arena.”

What further international sporting events are being planned in Azerbaijan?

In June 2013, the Islamic Solidarity Sports Federation will convene in Indonesia to announce who will host the 2017 Islamic Solidarity Games. We believe it will be Baku, as we are currently the sole host-candidate city and our candidacy was officially confirmed in October 2012 in Jeddah, Saudi Arabia, during the meeting of the Executive Board of the Islamic Solidarity Sports Federation. We have established a working group under the Baku 2017 Bid Committee comprising of professional local and international experts. The working group is responsible for the whole bidding process. It should be noted that in 2016 alone, Baku will host two tremendous events: the World Chess Cup and the UEFA U-17 European Championship Final Tournament.