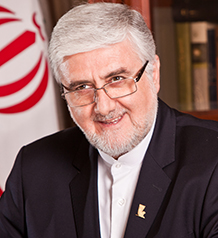 HE Dr. Majid Ghassemi established Bank Pasargad in 2005 and is currently the CEO and Vice Chairman. He received his MBA from Fairleigh Dickinson University and both a PHM and PhD in economics from the University of Southampton. In 1985, he was appointed CEO of Bank Melli, before joining the Central Bank a year later as Governor, a position he held until 1989. He served as First Deputy to the Minister of Energy and subsequently as Chief Advisor to the Minister of Industries and Mines, and he has held senior roles in Iran’s mining and metals industry. In 2012, he was decorated with the EU’s Medal of Honor with the rank Chevalier.

Share on:
TBY talks to HE Dr. Majid Ghassemi, CEO and Vice Chairman of Bank Pasargad, on the creation of the bank, international expansion, and bolstering Iran's trade potential.

What was the idea behind creating a private bank in 2005?

Pasargad is the most honored and respected name in Iran, as it means the center of Iranians. Every single word in the bank has a special meaning and has been carefully selected. Before establishing Bank Pasargad in 2005, it took more than eight years to study how to set up a bank that could be different from other banks and respected by the people. When I was the Governor of the Central Bank of Iran between 1986 and 1989, we had nine state-owned banks, and many entrepreneurs and investors in Iran were interested in establishing a private bank. The experience at the Central Bank helped me see all the strengths and weaknesses of the banking system. Being the CEO of Bank Melli was also a beneficial experience because state-owned banks work differently from private banks. Unlike many other banks, Bank Pasargad’s distinctive culture considers and treats all our employees as bankers.

Into which countries are you looking to expand?

At this stage, the corresponding relationship with foreign banks is of primary importance to us. However, premier European banks are still hesitant to resume relations, as they seek more clarifications and assurances by the US Treasury’s Office of Foreign Asset Control (OFAC). A few large European banks have visited us but have yet to establish full correspondent banking relations with our bank. Generally speaking, due to our past success and market share in Iran, all foreign delegations visiting Iran come to meet Bank Pasargad. In parallel, we are keen to establish a presence in the countries that have a high level of trade volume with Iran, such as China, India, Turkey, and a number of European countries. As a base principal, Bank Pasargad will develop its global expansion plan concurrent with Iran’s international level of trade and in the countries with which it trades. This expansion plan will be either through representative offices, branches, JV banks with foreign local banks, or acquisitions. The choice will depend on the laws and regulations of each country. For instance, right now most countries prefer us to establish subsidiaries in order to give more supervisory power to the local regulatory authority. However, the natural and organic way for banks to grow internationally is through establishing a network composed of branches.

What is the role of private banks in promoting trade with Iran?

Private banks have been successful in the country and have steadily gained market share from state-owned banks. Because of our superior level of service, corporate culture, dynamic decision making process, and diversified financial products, people prefer to bank with Iran’s private banks. Today, private banks hold a 60% share of all deposits. Iranian private banks have traditionally handled a significant portion of the country’s trade volume, mainly because of their well-trained staff and the high quality of their documentary credits, and this has been recognized by all international banks. In this post-sanctions era, Iranian private banks will gain even more market share from state-owned banks because we will be able to truly compete and display our skills and expertise. I also foresee a market consolidation in the Iranian banking sector with considerable mergers and acquisition activity. There is an excellent opportunity for all foreign investors at this point to purchase shares in Iran’s leading private banks.