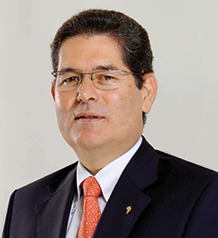 Back to Basics Both New & Old

Rubens V. Amaral Jr. has served as a Director of the Board and CEO of BLADEX since August 2012. He previously served as Managing Director for North America at Banco do Brasil, New York Branch. Amaral Jr. also served as a representative in banking supervision for the Central Bank of Brazil, on the Board of Trustees of the Institute of International Bankers (IIB), and as a Director of the Brazilian American Chamber of Commerce in New York. A graduate in economics, he holds a special certification from the Association of Alumni of the Brazilian Superior School of War in political and economic affairs.

Although projected economic growth in the region is falling, the IMF raised its projections for growth in Peru in 2016. What are your expectations for the Peruvian economy in 2016?

A stable economy with a steady investment flow in infrastructure is a key component of the successful growth Peru has been experiencing in the last few years. Our forecast points to GDP growth within the range of 3.7% to 4% for the current year.

Peru recently signed the TPP, a landmark trade agreement with 11 other Pacific-rim countries. What is the economic potential of this agreement, and how will its impact be felt in Peru?

As any trade agreement would, the TPP offers Peru the potential to increase its exports as it gains access to a major trade region comprised of 11 countries, which together represent 40% of the global economy, 25% of global trade, 30% of FDI, and a market of more than 800 million consumers. Several studies and analyses have been conducted indicating that the TPP would generate direct benefits to Peru’s agro-business, fishing, and mining industries, in addition to the retail sector, by reducing non-tariff barriers and facilitating increased integration in the production chain. Meanwhile, the World Bank estimates that the TPP could boost exports by 10% and GDP growth by 2.1% in the next 15 years. The Trade Research & Development Area of the Chamber of Commerce in Lima estimates that exports will grow by 12% in the next five years. Undoubtedly, there is tremendous potential, but as in any trade agreement its definitive success depends on each country’s determination to implement it in a timely fashion, to properly execute its programs, and to gain the approval of the required legislation to make it a reality.

One of BLADEX’s main focuses has been offering companies supply-chain solutions designed to improve their purchasing terms from suppliers and offer better selling conditions to clients. To do this we offer the vendor financing facility, a service in which BLADEX assumes the credit risk without recourse, thus allowing the parties involved to conduct more business. We also offer key support services that help companies draw up expansion plans and meet their liability management needs by offering access to funds from investors in Latin America as well as outside the region. To achieve this, we set up a special syndications and distribution platform which has already brought to market more than 30 transactions in the past few years, including eight with Peruvian companies and financial institutions.

A commitment to the development of human capital is one of BLADEX’s key values. What are some actions BLADEX is taking to be a socially responsible company?

BLADEX is committed to being a socially responsible corporation. We understand that the concept of CSR has evolved over time from mere corporate philanthropy to becoming part of the broader corporate culture of the organization. These core values are embedded in the way we conduct our businesses and seek to impact investors, employees, communities, and the environment in a meaningful way. We have also developed a special leadership training program aimed at preparing a talented young pool of future leaders from within the organization. We pride ourselves on having a workforce that really embodies our core values of integrity, commitment, respect, humility, and excellence.

What are some of the most significant challenges the Peruvian market faces right now?

Among the so-called emerging markets, Latin America has been greatly affected in the past two years. Nevertheless, this impact has not been evenly felt across the region. Peru, for instance, has been one of the exceptions, as the focus on fiscal discipline, adequate and pro-active monetary policy, and investments in infrastructure have each softened the blow. Therefore, the main challenge for the country is to maintain a clear and responsible path toward sustainable growth, irrespective of the changes in the political arena.

BLADEX recently arranged a USD25 million, three-year loan to Agrobanco. What is the importance of the agricultural sector for international trade in the region?

The agricultural sector is Peru’s second-largest export industry and is forecast to reach nearly USD6 billion in 2016 and account for 17% of the country’s total exports. There has been an important increase in sales of non-traditional products such as grapes, quinoa, and blueberries, for instance. On the other hand, irrigation projects in northern and southern Peru (Alto Piura and Majes Siguas II) should also lead to considerable increases in new crops, which also bodes very well for the country.