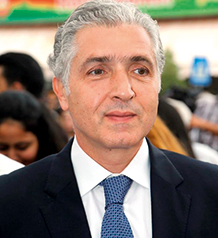 At The Gates of Transformation

An entrepreneur and a public servant, Jamal Itani is the owner of Levant Holding. He was previously president of the Council for Development and Reconstruction from 2001 to 2005 and has been the general manager for Solidere since 2014. He holds a bachelor’s degree in civil engineering from The George Washington University and a master’s in civil engineering and transportation from Pennsylvania State University. Itani led the Beirutis List to win the presidency of the Beirut Municipal Council on May 9, 2016.

Share on:
The Municipality of Beirut has set aside USD240 million for its 2017 budget. What is the strategy for its expenditure? A large portion of the budget focuses on investment projects […]

The Municipality of Beirut has set aside USD240 million for its 2017 budget. What is the strategy for its expenditure?

A large portion of the budget focuses on investment projects that will have a high return for Beirut. These are split into infrastructure and environmental projects, such as increasing the number of green spaces and other services. In 2016, the municipality launched a six-year plan, in which the main highlight are a final solution for waste management. We have launched a tender for the sweeping of streets and trash collection using the latest technology, including underground bins. Sorting from the source is a major goal. This is why we will provide different colored trash bins. The tender will be due in June 2017, and we expect to have a contractor on the ground by the beginning of 2018 with new trucks, new technology, and state-of-the-art operations. From there, the waste will go to a plant to be sorted and treated before being transformed into energy.

What are the highlights of the municipality’s plan for building a waste-to-energy plant?

This plant will provide a portion of the energy supply. Protecting the environment is also one of our biggest objectives. With this project, we have also launched a tender to plant almost 6,000 trees along the streets of Beirut. In addition, all the new infrastructure projects will instruct contractors to plant trees along the sidewalk and make provisions for bike lanes and pedestrian traffic. This will facilitate the use of pedestrian walkways and bicycles, and reduce the environmental impact of cars and motorcycles. We encourage people to walk; however, this cannot be done unless the infrastructure is present. In addition, Beirut needs to be more organized. We have already launched a tender for street and directional signs; all streets will be named and numbered, with a standard design and signs. We have more than 10 infrastructure projects this year that have already been launched—nearly a project per area per month. In June, we will launch a tender to change all the street lighting in Beirut to LED bulbs. This will save at least 50% of the electricity bill and reduce emissions. Organization, infrastructure, and environmental projects are our aims for 2017-2018.

How are your efforts to boost partnerships between the private and public sectors progressing?

What does Beirut offer to foreign investors and companies that want to establish operations in the city?

Investors require the right infrastructure, including high-speed internet, proper communication, and management of the transportation sector, which is another large project that we are working on. We have a public transportation project for 2018 to introduce a bus system and are building bus stations. This will also be a build-operate-transfer (BOT) project, inviting investors to participate. This will reduce the number of cars entering Beirut; we have 750,000 cars going in and out of Beirut every day and would like to significantly reduce that. We are also building parking garages in major key areas and at the entrances of Beirut. People can drop off their cars at the entrance to the city and enter via the bus system. This will also be a private-public partnership.

With five years more to your mandate, what are your goals and priorities?

Our priorities are the environment and making Beirut a healthier and friendlier environment. We are renovating and upgrading all the clinics the municipality operates. We issue medical cards for the less well off so they can receive medical treatment at a low cost. The Municipality of Beirut has strong relations with other ministries, like the Minister of the Public Sector, Power, Oil and Gas, Health, and the Environment.