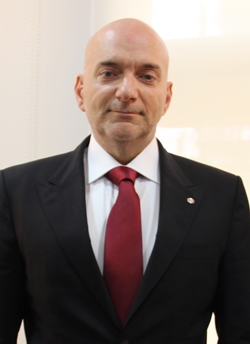 Minister of Economy and Trade, Lebanon

With a PhD in Business Management, Alain Hakim is currently the Minister of Economy and Trade in Lebanon. Having a career in the financial sector, he is currently serving as Deputy General Manager at Credit Libanais Group and is also the CEO of Hermes T&T company (part of the Credit Libanais Group), and as board member in several group subsidiaries. This comes in addition to several other positions he previously held in the banking sector. Alain Hakim has kept a close relationship with the academic world, where he is chairperson at the Business Administration Faculty of Saint Joseph University as well as lecturer at the Institut Supérieur d’Etudes Bancaires. He participates in several academic research studies in the business management field.€¨Alain Hakim believes that the role of the economy is to benefit the welfare of its citizens and not the opposite. His actions under his mandate as Minister of Economy and Trade revolve around this idea, where he encourages reforms that aim to increase competition in the market, protect consumers’ rights, and create job opportunities for the youth.

Share on:
"In 2013, about $1.5 billion was injected into the Lebanese economy by BDL, our central bank."

How effective has the Banque du Liban (BDL) stimulus plan, introduced in November 2013, been in creating growth?

In 2013, about $1.5 billion was injected into the Lebanese economy by BDL, our central bank. This had, of course, a great impact and allowed growth to reach between 1% and 1.5%, despite all various internal and external complications. It is worth mentioning that this $1.5 billion targeted several sectors; however, it was mainly used to prop up the real estate industry. The real estate sector has great potential for the future. We have low rates if you benchmark them with the region and our surroundings. Lebanon offers a great return on investment at that level. My disappointment was in regard to renewables, where, if I recall, 2.6% of the funds available were invested in the sector, while the rest went into real estate. It was not a problem, but a disappointment because I am a strong believer in renewable energy. In 2014, we will inject a further $800 million. Expectations are good, despite everything. We should reach 2.74% growth if everything is positive until the end of 2014. They expect that, with political stability, Lebanon could achieve 4.5% growth over 2014.

What do you feel the priorities should be in the Lebanese economy to reduce the deficit?

There are three main priorities today. First of all, we have the Syrian refugees in Lebanon, which is like an open wound in the country, costing us directly almost $1.7 billion per year. The second big wound we have is at the energy level, especially electricity, because when I talk energy, I like to talk about electricity, renewables, and water (ERW), but I will strictly talk about electricity. The cost of electricity per year to Lebanon is $2 billion. If you put together the cost of electricity and the cost of the Syrian crisis, they are draining $3 billion plus from the economy annually. The third problem is waste and corruption. Waste is about how we are losing money for nothing. If we just manage these three points, we can manage the entire Lebanese economy in just one year’s time. However, we need support on all three levels. On the first level, we have some commitment on the international level, and we should have a clear plan for the Syrian refugees. On the second point, we should have a clear plan on how to exit from the electricity problem that we have, especially by implementing the public-private partnership (PPP) approach. On the third point, the Lebanese government should do something specifically about the ports and airports, so as to end the waste of money on customs. In essence, we need better customs management. The third one is the easiest, and we should achieve it in a matter of weeks. On the second point, in July we had a meeting with the privatization council that is tackling the problem of PPP. We reached several main decisions to achieve better management over this area. This includes electricity, telecommunications, and water, but the main focus would be electricity in the first step. If you can arrange this sector, you can use the funds we are losing on that level for investments, for example on railroads.

“In 2013, about $1.5 billion was injected into the Lebanese economy by BDL, our central bank.”

What would you like to see as the next concrete step in the electricity and telecommunication sectors?

The main next step would be to tackle the legal aspect, because we don’t have anything on that level. If we can tackle the legal aspect first, we can achieve almost 50% of the road map to reach this, mainly on the electricity front. For telecommunications, we still have a sort of duopoly in Lebanon. Also during the council of ministers meeting, we were discussing how to open this sector up to a third-party operator owned by the government, Liban Telecom, and how to implement this to achieve better services and prices, and to reduce the monopoly element in the sector. This is how we can liberate both electricity and telecoms through PPPs. It should be a similar process for both.

What have been the most important factors that prevented the country from going into recession?

Recently, there was a report on CNN based on several main consultancy approaches to Lebanon. These companies are saying that today Beirut is among one of the 12 best cities to invest in. This means that we have great potential in Lebanon. If the foreigners are looking at Lebanon like that, then how should we look at our own country? I am saying that because we tend to think pessimistically before optimistically in this country. These companies were saying that Lebanon has many potential promising sectors, such as real estate, education, and health. The second important point I wanted to mention was that between 2010 and 2013, we have had an average GDP growth rate of 1.7%, despite everything, whereas Europe has recorded around -0.6% over the same period. The main points that are allowing this are three. First of all, the private sector with all its components, then the financial sector. Today, total assets under management (AUM) in Lebanon recorded a 7.1% increase over 2014. In terms of deposits we have seen a 6.2% increase, and a 7.1% increase in loans. The financial sector is doing well. The third point, which is the most important, is in regard to expatriates and immigrants. The immigrants segment is not well-used or implemented in Lebanon currently. We can do more on that level. On the expatriate level, since it is an individual approach, they are doing fine. They come in for a short time, and go back, or at least send money back to their families. The immigrants leave and don’t come back; however, they can still have interaction with the country. Today, we are trying to implement something that nobody else is doing in Lebanon. It is similar to a form of economic diplomacy, using our embassies as a point of sale. This is not just for expatriates, but for other markets as well. If we look into exactly what we need from each country and what each country needs from us, then this intermediary can be the embassy.

How significant will the proposals by the European Investment Bank (EIB) to invest ‚¬164 million be to support the local banking sector?

The main point to reach on that level is that it is not only that investment. Other investments in Lebanon are also important. In the second pillar we mentioned, the private sector, you have one important segment that we are trying to develop to help and support, which is the SME segment. I imagine the main subject and target of this foreign investment on that level is not just about what the EU is doing, because we also have many funds helping on that level. The Ministry is preparing a national charter for SMEs to achieve this goal.

What do you think is the most significant infrastructure that needs to be developed in the oil and gas sector here?

First of all, the whole network. You need tanks and pipelines, for example. We should also work on human resources. According to the law, you need 80% of your staff to be Lebanese. In oil, not many people have the expertise for that, meaning there are only a few Lebanese workers. From where will we import the human power and knowledge? During those six or seven years before we have extraction commence, we should launch a major training program on a national level, especially at universities, for oil management. What is necessary is that all the required infrastructure and HR, which is the main objective, are in place before extraction starts.