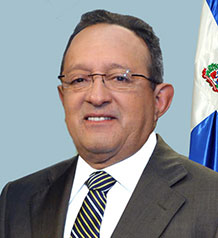 He studied agronomy engineering at UASD and from very young he is related to the agriculture sector. He is a renowned agricultural entrepreneur linked to the rice sector and promoter of productive agricultural associativity. In 2012 he was appointed administrator of the Agricultural Bank (Bagrí­cola), position he occupied until his appointment as Minister of Agriculture in 2014.

Share on:
“We want to go from the current agricultural system to a precision one for many reasons.“

How has the Ministry supported the improvement of agricultural technology in the Dominican Republic?

One of the most important projects we are focusing on is the expansion of greenhouses. In 2004, we had around 200,000 square meters of greenhouse production; we have now increased that to 10 million square meters. The Dominican Republic has many advantages in terms of climate and microclimates that allow us to produce high quality products throughout the entire year. In greenhouse production, we have had specific issues with post-harvesting management. Therefore, we created a public-private alliance to resolve that issue and improve our export products’ quality, particularly their shelf-life once they reach other markets. That is why we have been working with the private sector to standardize these post-harvesting management procedures. Another important project is our in-vitro laboratory, BIOVEGA. We established this lab with the aim of producing plants with high genetic quality and focusing on especially important commodities, such as bananas and plantains, with the goal of improving their productivity and resistance to diseases. We have teamed up with researchers from Belgium and France to do so. Another issue preventing us from increasing livestock productivity is genetics, so we built another lab called VITROGAN-RD. With this lab, we seek to transfer around 36,000 embryos to small farmers and producers to help improve their cows’ milk production. Currently, our average milk production in terms of liter per cow per day is around 5. We can improve that more than 100% if our livestock production comes from breeds adapted to the tropics. Another of the most important products for the Dominican Republic is rice. Thus, we hired one of the five most qualified rice geneticists in the world—who happens to be from the Dominican Republic. Working just part-time for the Ministry, in merely two years he has already started to improve four of our national varieties of rice. We are also close to developing the first two hybrids from Dominican production.

How does the Ministry support the promotion of agricultural exports?

We have identified plant and animal health as a cornerstone for exports here in the Dominican Republic and we are working with different institutions like the Food and Agriculture Organization (FAO), the US Department of Agriculture (USDA), the Animal Plant and Health Inspection Service (APHIS), the World Organization for Animal Health (OIE), and many others to ensure our animal and plant health protocols are standardized and open for any market. On the other hand, when we took office, we had to face two very difficult issues. The first was the detection of the Mediterranean fruit fly in Punta Cana. Since we had no formal mechanism for identifying it, we sought help from institutions with the requisite know-how such as APHIS/USDA, MOSCAMED Guatemala, OIRSA, FAO, IICA and the International Agency for Atomic Energy (IAEA). When we started working in 2014, we had just 200 traps in the whole country to capture the medfly. Now, we have around 14,000 traps, and have now been medfly-free for two consecutive weeks and have had no larvae for more than six. The Technical Advisory Committee, which is made up of the aforementioned institutions and international agencies, wants to document our progress so it can be the standard for other countries, which makes us very proud, especially because of the fact that we turned a weakness into a strength. The second issue that we had to face here in 2014 was the audit carried out by the DG Santé, the EU plant health authority. On this audit, our country was found to ship too many of our products not meeting EU health standards. This meant we were threatened with losing access to the European market, an immensely important one, if things did not change quickly. Our reaction was to gather a team from the Ministry of Agriculture, the private sector, and other agencies such as the local Delegation of the European Union and started working on a protocol. We sanctioned exporters, suspended exporters licenses, installed systems of hard and cold water treatment in companies and implemented prerequisites for them to export. A year later, we went from 176 notifications just to 32. As a result, we also increased exports.

What are the benefits and disadvantages that CAFTA has brought to the Dominican agriculture sector?

The DR-CAFTA agreement is a trade deal which has brought many advantages to our national economy and our people. However, it also has brought many challenges, especially for the agricultural sector due to the way it was negotiated. The agreement has negatively impacted some of our most economic and socially important products. All together rice, chicken, beans, pork, and milk production affect more than 150,000 small farmers. For crops like rice and beans, the average farm size is less than three hectares per farmer, which demonstrates just how vulnerable these farmers are. As a country we are trying to compete, but sometimes it is difficult to compete with much larger economies. For instance, the US has the 2014 Farm Bill, which includes huge subsidies for its farmers. Those subsides immediately take Dominican farmers out of competition. Commercial trade and agreements are important, but it is also important to ensure the wellbeing of all parties involved. The trade relationship between the Dominican Republic and the US is very important, not to mention the very strong social ties. Total trade is worth more than USD10 billion a year and, as allies, we need to take care of each other. If we talk about agriculture in the Dominican Republic, we are probably talking about the country’s most important economic activity, since every other sector has some kind of ties to agriculture. There are more than 400,000 agricultural producers in the DR. If these farmers do not have a way to make money, they will not be able to buy consumer goods like cars and electronics that mostly come from the US. Our goal right now is to sit around the table with the US and talk about the possibility of taking care of each other by protecting those small farmers that are at risk, and ensuring that the DR-CAFTA does them more good than harm.

What are the goals and priorities of the Ministry of Agriculture?

We want to go from the current agricultural system to a precision one for many reasons. For starters, there is increasingly less water; hence, the need to switch to precision irrigation systems. This should be done for the entire banana, bean, and vegetable industries. We also want to introduce high quality and genetically strong seeds into every farm and every product. We are already introducing a variety of hybrid corns and want to tie these to the local production of chicken and livestock, which is already giving us promising results. We also want to increase technical services to small and medium-sized farmers by rebuilding our eight regional offices and becoming more of a technical service institution. By that, I mean that when a farmer needs specific assistance, he will be able to go to the office and get help at every stage through the end of production. This is what we must do.