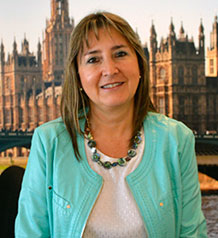 Patricia Tovar has been with the Colombian British Chamber of Commerce for 14 years. Previously, she was also the president of Eurocámaras for two periods.

Share on:
"When people make the decision to invest it is because we have economic stability."

How have trade relations between the UK and Colombia grown since BRITCHAM’s establishment in 1981, and what role has the chamber played in that development?

We are celebrating our 35th anniversary. The chamber was created by a group of British companies that established their business operations in Colombia. It was initially supported by the ambassador, and now we are celebrating the benefits of our bilateral relationship in different sectors, with the most important being oil and gas and mining. With time there have been many other sectors that have grown between Colombia and the UK, such as infrastructure, automobiles, machinery, and equipment for heavy industry, spirits, liquor, and pharmaceuticals. In terms of Colombian exports to the UK, we have expanded our trade volumes for petrol, coal, nickel, and one of the most important exports of late has been palm oil, which has already seen a lot of growth and potential for exporting to countries beyond the UK. That is one of the most interesting new products that we have been developing for the last 12-14 years. We see the UK as an important supporter and ally for Colombia, as it is one of the most important of the three largest foreign investors in our country. The UK government watches Latam as a potential region to invest and Colombia as one of the most stable economies. We find that we have an interesting future as commercial partners.

What are some of the sectors that are particularly attractive to British investors?

One of the most important sectors now is definitely infrastructure, due to the government’s Fourth Generation Infrastructure plan. There are many companies interested in learning more about the opportunities to invest. One such company is Holdtrade, which is developing an important rail project from La Dorada to the Santa Marta port.

What are some of the advantages in terms of attracting investors that Colombia has over other countries in the region?

When people make the decision to invest it is because we have economic stability, which is one of the most important issues for foreign investors. At the moment, we are carrying out the peace process, which has already succeeded in attracting worldwide media to our country. We hope the government with the next structural tax reforms will help companies to be able to define a strategy for investing here. We have a privileged location; therefore, Colombia is investing in ports to increase its competitiveness for goods and prices to internal transportation, distribution, and logistics. We do not have a political problem at the moment as do countries like Brazil, Venezuela, or potentially even Argentina. By comparison, Colombia has been providing a source of stability and relatively important growth for investors. Our people are of course another asset, and international surveys regularly show Colombia to be one of the happiest countries in the world, making it easier to attract personnel from abroad.

How do you foresee the uncertainty surrounding Brexit affecting trade and investment between the two countries?

The potential effect of Brexit is an interesting subject of analysis for economists around the world. The vote is over and we have to work and start thinking about the consequences and turn them into advantages. Colombia is a close ally of the UK, and we protect our allies. We are suggesting that the government sit with the UK government. We have the EU trade agreement, which was negotiated for so many years that it is part of what we can maintain with the UK in a bilateral agreement, so the negative effects on Colombian exports should be minimal. We have always had the visa procedure, so we are accustomed to it. The sterling pound has always been a strong currency and will likely remain so. We try to promote the benefits of an interesting trade relationship between the two countries, with more trade visits. Our top commercial partner remains, of course, the US, but we ask our entrepreneurs to come with us to the UK and be trained in industries like agribusiness and textiles, where there is a potential interest. This is part of what we will try to achieve in terms of bilateral trade; however, we will also have to strengthen our commercial and cultural ties. Politically, we are already on course thanks to the planned state visit of President Santos to the UK in November, and we expect this to have that an interesting effect on our trade relations and economic performance. We feel that after their democratic decision we just have to make the best out of it, but they have to be active, fast, and intelligent, as there are many companies around the world supporting businesses with the UK. Their plans should not be underestimated; they will come up with something superbly interesting that could perhaps lead to stabilization in other economies in a similar situation, Catalonia being one obvious example.