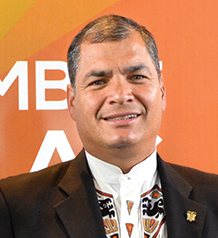 HE Rafael Correa is the President of Ecuador.

Share on:
HE Rafael Correa, President of Ecuador, on weathering economic challenges and looking to a future of greater social inclusion.

As we had anticipated 2013, 2014, and 2015 have proven to be difficult in terms of the substantial investments required, and had they been undertaken decades earlier, Ecuador would have been a radically different country today.

Before the current external problems being faced, we had estimated a GDP deficit of 5% because of historical and urgent investments in hydropower, multipurpose water management projects, and the upgrading of the refinery in Esmeraldas, which also required a halt to its operations and increased fuel imports.

We had not expected a decline in oil prices to match that observed from September 2014, or else the steady appreciation of the dollar, coupled with the deliberate devaluation of local currencies in neighboring countries.

The problem has been external rather than fiscal, and the key instrument in tackling such situations is the exchange rate, which we lack in the absence of our own national currency. We needed to take urgent alternative measures, which we duly did. Respecting all international agreements Ecuador is party to, we applied security measures such as 30% tariff surcharges on imports, equivalent to less than 8% of goods available in the economy, which are also not mass consumption goods that impact the food basket.

The results have exceeded expectations. Today we consume higher quality products made in Ecuador, benefiting thousands of fellow producers, large and small, and at lower prices.

Last year, despite facing several months of falling oil prices and dollar appreciation, we grew by 3.8%. The non-oil segment of GDP, which basically responds to public policy, grew 4.3%—almost fourfold the Latin American average of 1.1%.

Today tax revenues contribute more than 50% of the country’s general budget. Between January and April 2015, we raised $5.3 billion, exceeding the amount generated in the same period of last year by more than $440 million, on an increase of 9%.

Annual inflation between April 2014 and April 2015 was at 4.3%, and accumulated inflation between January 2015 and April 2015 at 2.5%. The variation in prices this year is due to factors including a harsh winter season that caused certain product shortages, the closure of key roads and highways to domestic trading, and increased transportation costs, which, frozen for years, were recently reviewed by the municipalities. The security measures adopted by the government have, however, not notably impacted inflation.

From September 2014 until April 2015 the country stopped receiving $2.2 billion in oil revenues, although no strategic work or project was discontinued, no child left school, and no pensioner failed to receive their pension. I am convinced that the hardest period is now over. In March, with the so-called punishment for quality differential, our oil hit $34.7/bbl, which in many cases is not sufficient to cover production costs. Today the price of oil has recovered to $58/bbl, and we will advance without further difficulty.

We always said that our adjustment variable, in the event of difficulties, would be public investment, rather than liquidity funds, which besides undermining the fundamental principle of macroeconomics of converting the most efficient saving into investment, only served to guarantee the payment of external debt. In fact, these funds were abroad, earning interest rates of less than half a percentage point, while the country was still paying bonds with interest rates of 12%.

We have shown that with or without oil, our economy is strong. The fiscal situation is also quite solid. In eight years, tax revenues as a percentage of GDP have risen from 10% to 13.5%, equivalent to an increase in revenues of $8.9 billion. In this context, $9.14 of every $10 of this increase corresponds to the management of the Internal Revenue Service and just $0.86 to tax reforms.

Our current expenditure is at 15% of GDP, three percentage points below the regional average. Since 2007, permanent state revenue has funded all ongoing expenses. In private accounting, this amounts to operational profitability. Ecuador has the highest public investment in the region for the common good of its citizens. While the regional average for public investment is 4% of GDP, Ecuador almost triples this. Ecuador is one of the six less indebted countries in the region with a public debt/GDP ratio of 29.9% in 2014, compared with an average of 39% for Latin America.

I know very well that there are structural, external, fiscal, systemic competitiveness and technological bottlenecks that if not remedied, they will never allow us to take off toward development, and that can only be overcome by appropriate investment. This will be achieved by planning, appropriate public investment, effective regulation, and appropriate policies.

We have recovered the state to guarantee rights. The middle class has grown and the increasing access to education builds an empowered citizenry that has the obligation to engage with the state to build the common good. We have always been clear that our revolution is citizen-based, as the citizens hold the power.

The reduction of poverty and inequality is historic, resounding, and irrefutable. All studies show that since we have been in office, poverty is less severe than before; economic and social gaps have been shortened; and we have experienced upward social mobility.

The National Secretariat of Planning and the Statistics and Census Institute has released the results of the Living Conditions Survey 2013-2014. This survey, conducted on average every ten years, shows a significant drop in consumption poverty from 38.3% in 2006 to 25.8% in 2014—down 12.5pp, of which 7.1pp is due to redistribution and 5.4pp to economic growth policies.

Our growth has been pro-poor; that is, the welfare of the poorest has grown faster than that of the wealthiest, leading to the foundation of a more equal and cohesive society. We note that the reduction of inequality and poverty in turn is a brand of the Citizen’s Revolution.

However, there is something more important and denotes a further structural change. In our government, poverty and inequality reduction has been based on access to rights. The increase in tuition, transit, and exit at every stage of education has been faster in the poorer strata than in the rest of the population. The same applies to the increased access to social security and health.

This democratizing access to human capabilities breaks the intergenerational transmission of poverty and inequality that our society has suffered. The Citizen’s Revolution is a transformation of the mind that, from a historical perspective, has considered future generations and held responsibility for them.