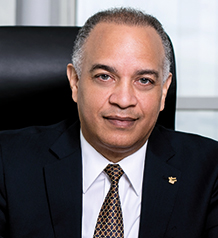 Méjico Ángeles-Lithgow is the President of Barrick Pueblo Viejo. He has spent 10 years at the company. He has a degree in business administration and master’s degrees in finance and the economic regulation of the electricity sector.

Share on:
TBY talks to Méjico Ángeles-Lithgow, President of Barrick Pueblo Viejo, on the significance of the company's operations in the Dominican Republic and the risk and challenges in the local environment.

What is the importance of Barrick Pueblo Viejo for Barrick Gold’s portfolio and the Dominican economy?

A concrete indicator of the importance of our operations is the fact that in 2016 we were ranked first in our sector in fiscal contributions to the economy as measured by corporate tax payments. Therefore, not only does that position us as market leaders, it also means that over 51% of the corporate taxes collected by the government came from us. Our company has a great impact on the regional economy not only because of its fiscal contributions; we have also generated over 11,000 jobs during the construction period and currently have 2,200 direct employees. In terms of the indirect impact that our operations have, it is safe to estimate that for every one direct job we create, another five indirect jobs arise. Some of the highlights of the study that positioned us so well in the regional economy include an increase in the number of micro businesses from around 30 to more than 330 since our arrival in the country, in addition to the number of loans made by banks. We have invested over USD30 million through CSR activities in the country.

In 2015, we produced 974,000 ounces of gold and 1,161,953 ounces in 2016. Our processing plant started operations in August 2012. To date, we have produced more than 4.1 million ounces in just over four years of production, with numbers increasing every year. Our expectation based on the feasibility study was originally 1 million ounces per year for the first five years of operation. We have adhered to the numbers and yielded positive results, with the exception of 2014, which ended about 26,000 ounces under the projections. The expectation for 2017 is consistent with the last four years; we expect to produce just over 1 million ounces by December. This is promising, considering that the average productive life of the mine is about 25 years. Nevertheless, we are working to extend the life of the mine to the best of our abilities. The current reserves are estimated to be 12 million ounces.

What are the risks and challenges of the mining industry and how has Barrick Gold faced them so far in the Dominican Republic?

So far, the biggest issue has been the lack of a mining tradition on the island. This makes a difference because the Dominican economy has been mostly dominated by services, tourism, and agriculture. Because of this, mining in the region is associated with a large negative environmental footprint. Thus far, our operations have taken place in a mine that was once managed by the Dominican state; these operations left high negative externalities that we have worked to remediate as we operate. As we continue to operate in strict compliance with the highest environmental standards, one of the greatest challenges we continue to face is changing society’s general perception of the sector. In our experience, conducting our operations with the highest ethical standards and commitment to transparency, not only at a fiscal level, but also on every level of society, is the way to mitigate this. Now, we have actually been officially recognized for our relationship with the community. In 2008, we had a valuable experience in which we collaborated with different municipalities on different projects as mandated by law. This immersion into the communities helped us create many communication channels to carry out our social responsibility projects and make a difference in the community. Furthermore, our relationship with the government, our biggest stakeholder, is currently strong after a contract renegotiation in 2013. At an internal level, the greatest challenge is cost reduction. For the past three years, we have been working on an initiative to maximize efficiency in which employees make suggestions to improve our operations.

What are your objectives for 2017?

At the global level, we are focused on cost and debt reduction. At the local level, we intend to finalize the current project financing to cover our debt by the end of 2017.