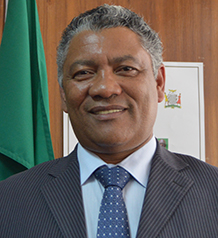 The Hon. Given S. Lubinda is the Minister of Agriculture & Livestock in Zambia, a Member of the National Assembly of Zambia for Kabwata Constituency (Lusaka), and the former Minister of Foreign Affairs in the Cabinet of Zambia. In January 2012 when he was Minister responsible for Tourism he bungee-jumped from the Victoria Falls Bridge to restore confidence in the jump arrangements after Australian Erin Langworthy’s rope broke during her jump. He has offered to jump again with Langworthy.

Share on:
TBY talks to The Hon. Given S. Lubinda, Minister of Agriculture and Livestock, on the national Farming Block Development Plan, the commodities with the highest market potential, and the development of the fishing industry.

Can you elaborate on the Farming Block Development Program and what opportunities are there for international investors within this project?

We have identified ten farming blocks and we have an eleventh block on the drawing board. The Nansanga Farming Block in Serenje is well connected by road and electricity has been delivered. We have already allocated pieces of land to small-scale and commercial farmers and we are in the process of awarding 10,000 ha of land to what we refer as a core venture. Our idea is to create a hub and spoke arrangement in the farming blocks in the sense that you have one big player that goes not only into agricultural production, but agro-processing and marketing. In that way, they create an appetite for production in the farming block. The small farmer gains expertise and input from the core venture, which in turn benefits from the production of the small-scale farmer. That is one of the innovations that we have come up with to try and attract local and foreign investment into the agriculture and agro-processing industry. Zambia’s tax regime has been friendly to the agricultural sector. Whereas all industries pay a 35% to 40% income tax rate, the agricultural sector is charged 10%.

Which commodities hold the biggest potential for the farming block development areas?

The commodities that we are promoting are oil seed, soya, sunflower, cowpeas, and we are also promoting cassava because it has a huge market both locally and regionally. There is also a huge demand for wheat in the sub-region. We are hoping that we can expand the production of wheat for the export market. The production of white maize has stabilized and we are now producing much more than is required for local consumption, which has allowed us to expand into the export market. White maize is not very nutritious though and, to improve on nutritional levels for our people, we are promoting orange maize, which has a higher quantity of vitamin A. Tubers, such as sweet potatoes and Irish potatoes, are also becoming very important. We are promoting potatoes particularly the varieties that are good for processing into crisps. We are working now with National Breweries, which have been conducting experiments that have proved successful with the utilization of sorghum in the production of both opaque and lager beers. There is an imminent malting plant that will be processing barley into malt. Its capacity is 15,000 metric tons per year that is also creating huge demand for barley. Livestock such as cattle, poultry, and sheep and goats have a significant place in the farming blocks and in Zambia generally. Fish farming shall be promoted through Aquaculture Parks.

Zambia holds around 40% of the water resources in the SADC region. What efforts is the Ministry making to develop an efficient fishing industry?

We are cooperating with a number of bilateral and multilateral organizations, such as FAO, in developing our aquaculture industry. We are doing this both in capture fisheries and in aquaculture. Over the past few years, we have seen an emergence of a number of fish farmers. The government and its cooperating partners are also giving out grants for farmers who intend to go into fish farming. We are in the process of developing Aquaculture Parks which will provide fish farms and fish processing facilities. This year alone, we are recruiting close to 150 Fisheries Extension Workers. Twenty million hectares of land are covered by water in Zambia that we also need to protect. We are coming up with a program for regular and strict policing of fishing on the natural bodies of water. We have a number of colleges that are training people in fish farming and our fisheries department is also conducting research.