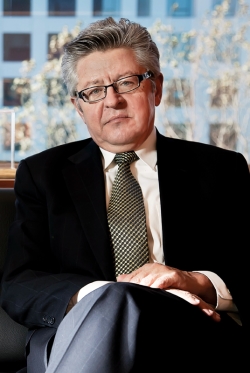 Alp Malazgirt joined the company as CEO after 17 years in Silicon Valley, California, and 10 years as a serial entrepreneur both in the high-tech and service sectors in the US. Prior to joining Yıldırım Group, he was an Associate Professor and Associate Dean for an up-and-coming business school in South Korea. He has a PhD from the University of California in Materials Science and Engineering.

Share on:
What kind of investments are you looking at in Africa? ALP MALAZGİRT The four sectors that we have experience in are mining, port operations, energy, and fertilizers. If there is […]

What kind of investments are you looking at in Africa?

ALP MALAZGİRT The four sectors that we have experience in are mining, port operations, energy, and fertilizers. If there is any region where you can include all four of those sectors, it is Africa. It needs fertilizer and it needs huge amounts of energy. There are many mining opportunities and port operations. We want to focus on these four sectors and then scale up, using the technology we have and our own know-how. That is the reason why West Africa really fits the bill for us. With the office we have opened in Gabon, and the ones soon to open in South Africa and in East Africa, we will call it the “golden triangle,” which will capture all the opportunities we see in Africa.

ROBERT YÜKSEL YILDIRIM Our strategy in Africa is different from our strategy in Latin America. We go directly business to business in Latin America; in Africa, we go directly to the government. We want to set up joint ventures with government entities. That way we don’t look like foreigners coming in to take advantage of Africa. As a Turkish company, we want to take on a different model than Chinese companies. Africans are getting tired of the Chinese; they make investments in countries, but they bring in Chinese workers. We are informing all the ministries that we want to bring the finance and the know-how; however, we also want to employ local people.

What do you see as the most attractive investment opportunities in Mozambique?

RYY Mozambique is interesting for us because it has coal, which means mining opportunities. It also has gas, which is the fuel for fertilizer. We know energy already, which the country also needs to expand and to export to its neighbors. Mozambique has a long coastline, meaning there are many ports and opportunities. When the investment comes, there will be a lot of exports from Mozambique, and it will need gateway ports. Our own shipping company will be able to cover our logistical needs when exporting or importing overseas, and that is why we are paying attention to Mozambique. Another advantage of Mozambique is that it is a gateway for landlocked countries in the area, such as Malawi and Zimbabwe.

AM Mozambique is a country that is developing; however, Colombia is semi-developed. Rio Tinto is producing coal in Mozambique, and it is setting up the infrastructure for its operations. We are a small company, relatively speaking, so we are more interested in so-called “brownfield” projects rather than “greenfield” projects. We need countries where there is enough development so there is a choice among junior-sized companies. In Colombia, the coal business has been around for a long time, and it is mainly small enterprises doing business. Only a few of these will be big enough and strong enough to do business with; however, Mozambique doesn’t have that goal yet.

Is it difficult to come in and compete with the large-scale companies in Mozambique such as Vale and Rio Tinto?

RYY These are major companies; Rio Tinto and Vale are in the top five. We are not in the top five, so we need to know our scale. We cannot go and fight with the heavyweights because we will get knocked down immediately. We are looking for junior mining companies that we can provide some value-added. The project size needs to be something that we can chew. We don’t want it to be too big and then lose everything at the end. We need to be very selective and find the right project for our size. We need something that we can develop so it will be attractive to investors and becomes a target either for M&A or so we can decide to have an IPO.

To what extent does Mozambique present Yıldırım Group the opportunity to implement its “one-stop-shop” strategy with regards to energy, logistics, and shipping?

AM Mozambique presents Yıldırım Group an incredible opportunity to implement this “one-stop-shop” strategy because the country has all the right ingredients for Yıldırım Holding to be most effective. It has vast mineral and coal resources, that need to be mined, and it has a long shoreline and only a few ports that need development to ship overseas for valuable foreign exchange. Because Mozambique is a developing country with limited resources, Yıldırım Holding can bring a suite of huge benefits of having just one company and one entity to deal with to provide a full range of services, which are comprised of port operations, port construction, mining, coal transport and logistics, building mine-mouth power plants, and fertilizer production and distribution. Imagine the amount of time—not to mention the valuable human resources and dollars—Mozambique can save by dealing only with Yıldırım as its one-stop solution provider, instead of dealing with a plethora of companies from different countries.

What is the scale of the investment you anticipate in Mozambique?

AM There is no set scale or number that we have reserved for Mozambique. However, we have clearly defined the areas that we would like to invest in and form partnerships with other companies and/or the Mozambican government on these projects. The chosen four areas of strategic growth fit like a glove into Mozambique’s long-term growth plans, which are in mining, energy, fertilizer, and port operations.

To what extent does Mozambique have the potential to become West Africa’s key shipping hub?

AM I feel that Mozambique has a unique position, because of its the geography and at this juncture in the history of global trade, to become East Africa’s key shipping port because firstly it occupies over 1,300 miles of the eastern coast along southern Africa, and secondly that it acts as a significant transport corridor door for four landlocked African countries with vast mineral, natural, and human resources. Finally, it has its own rich natural resources that will be used for exports to assist in the growth of the country. With all this, it behoves the country leaders not to make substantial investments in port development and port operations. Certainly, the Port of Maputo is of international stature and the Port of Beira is developing. However, there is still a dire need for more ports and efficiency enhancements. With the addition of Gemport and Rotaport into its portfolio of ports in the Sea of Marmara, Turkey, and also having the ownership of 50% of one of the biggest transhipment hubs in the world, Malta Freeport, Yıldırım Group is well poised to assist in an ambitious plan to develop, construct, and operate Mozambique’s “window to the world.”

How significant is Africa in general, and Mozambique in particular, to Yıldırım Group’s global portfolio?

AM Yıldırım Group operates in more than 10 sectors, and in each and every sector it is one of the top players either in Turkey or globally. The company also has ambitions to become more global and grow in those sectors that it has the expertise, a track record of transformational change, and synergistic know-how. Mozambique, on the other hand, has the natural resources and a young population and is desirous to grow economically. We feel that there are many areas in which we can work and cooperate. Clearly at the top of this list is port construction and operations, importing coal to fuel energy power plants anywhere in the world, assisting in Mozambique’s ambitious plans in exploring and developing minerals, mines, and metallurgical smelting, and also assisting in the promotion, production, manufacturing, and distribution of much-needed fertilizer to support its agricultural base.