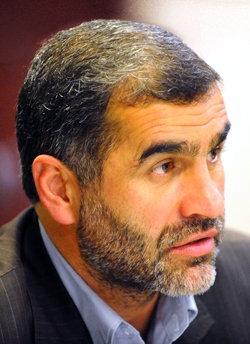 Ali Nikzad holds a BSc in Civil Engineering and a Master’s degree in Public Administration. His solid background in both urban design and public office was enhanced by his role as Governor of Ardabil province over the 2005-2009 period. He was Minister of Housing and Urban Development from 2009-2011, before adding the transport brief to his portfolio and serving as the new Minister of Roads and Urban Development from June 2011.

Share on:
TBY talks to Ali Nikzad, Minister of Roads and Urban Development, on plans for the country's transport network and the need for higher investment in infrastructure.

In 2011, the Mehr Housing Project produced 600,000 new units in its first phase. How has the Ministry balanced supply and demand considering the mass production of these units?

It is the Ministry’s goal to increase housing supply and create a balance between supply and demand in the housing market in order to control the trend of housing prices and provide housing to the vulnerable. By accomplishing these two objectives, the government’s ability to respond to security challenges increases.

How would you describe Iran’s current infrastructure network?

Sustainable development is fundamental in economic, social, and cultural matters. Roads, in particular, are very important in regards to the communications network, and also affect many of the activities of the country. Any new roads to be developed will be based on internal arterial roads. More than 90% of passenger transport is currently by road. The main priorities of the Ministry of Roads and Urban Development are the extension of the road network and communication lines. The Mehr-Mandgar project has been developed to help achieve these priorities. The Urban Development Ministry and the government plan is to complete 745 kilometers of freeways, 5,626 kilometers of highways, and 2,970 kilometers of main roads by the end of the 10th government’s term. Iran has land and sea borders with 15 countries. This reveals the growing need for the development of trade and transit in the region. There are three main transportation corridors and two main plans regarding road transport at the moment. In the north, we have transport connections with Russia, Eastern Europe, Central Asia, and the Caucasus. While it is also possible to access Southern Asia and the Persian Gulf states, we also have the TRASIKA transit corridor that connects Europe to the Caucasus and Central Asia. The East Transit Corridor aims at establishing relationships between the countries of Central Asia, the Caucasus, the Indian sub-continent, as well as countries in North Africa and the EU. In development, we have the Land Transport Infrastructure Network and Asian Highways Development Plan. Iran is also considering a transit-oriented development plan for the east of the country with the aim of establishing a quick and affordable network between the north and south.

What investments have been made over the past two years in order to improve the country’s transportation routes?

Over the past few years, Iran has made several investments in railways, highways, ports, and airports, which included negotiations with a number of countries such as China, Ukraine, Turkey, Malaysia, India, Germany, Italy, and Spain, among others. Several Chinese companies in the field of financial resources have invested in transportation projects, such as the China Railway Engineering Corporation’s (CREC) high-speed rail projects in Tehran, Qom, and Isfahan. There have also been railway project agreements with other Chinese companies including China National Machinery and Equipment Import and Export (CMEC), China Railway Construction Corporation (CRCC), China Machinery Industry Construction Group (SINOCONST), and China Harbour Engineering Company (CHEC) using the EPC+F method. There are also many European countries seeking to invest in transportation projects here, but due to political issues we are still in the preliminary phases. With the implementation of a targeted subsidies law, the transport sector has been affected by increased fuel and ticket prices, meaning transportation costs have increased. More than IR180 trillion has been invested in the transportation sector. Due to the lack of parts and the cost of transportation projects, negotiations with several foreign parties involved in construction projects have been carried out. In the aviation sector, investments, aircraft purchases, and passenger yields have all grown, both domestically and internationally. Due to sanctions, Iran does have a problem with an aging fleet, and the inability to buy new aircraft is affecting the quality of services. The air transport sector needs more investment and it also needs to replace inefficient aircraft. Airline mergers or liquidations will enable the sector to develop the air transport industry and thus improve quality. Despite the profitability of the commercial sector, there still needs to be much investment into sea, rail, air, and other subsectors. There needs to be incentives for private sector actors to encourage more investment. The right incentives could attract investment accordingly and in this way the internal transport sector could develop. In fact Iran, with its 980 kilometers of strategic borders, is the transportation hub for 75% of the world’s oil and gas reserves. Being neighbors with Central Asia, Afghanistan, Iraq, and Pakistan has provided our country with an exclusive transportation position.

“The main priorities of the Ministry of Roads and Urban Development are the extension of the road network and communication lines.”

According to the Five-Year Development Plan (FYDP), Iran will extend 5,000 kilometers of its railway network. What is the overall strategy behind this upgrade?

Because of the characteristics of the railway system and its compatibility with sustainable development, rail transport is considered green transport. Considering its high level of safety, demand for this type of transportation is increasing year-by-year. The Ministry of Roads and Urban Development has set the expansion of the railway system as its major priority. When the FYDP is completed, 4,683 kilometers of rail line will be added to the country’s railroad system, and 1,033 kilometers of it will be in use by the end of this administration. The priority will be the completion of the railway system in order to develop the railway transportation network and its connection to important borders and ports. Some of the new projects will connect Qazvin-Rasht-Anzali-Astara, Kermanshah-Khosravi, Chabahar-Zahedan-Mashhad, and Shalamcheh-Basra. The completion of these projects will bring benefits such as increased transit revenues of about $350 million, 7,300 new jobs, lower fuel costs, and reduced pollution levels. Iran’s rail network will benefit from connecting the railway systems of the Middle East and the EU, as well as Central Asia and China. The new networks will also connect to Caspian Sea countries such as Turkmenistan, Kazakhstan, Azerbaijan, and Russia in the north. This new network will not only benefit Iran, but will also provide international benefits. Due to its location, it will make Iran a crossroads. It will provide access for our landlocked neighbors to Iran’s 3,000 kilometers of open waterways. The network will increase activity in its many ports in the north and south, which in turn will bring political stability as international trade increases. It will also provide a secure mass-transit system for imports and exports. Over the coming years, the transport sector is expected to grow higher than the GDP growth rate of 8%. The transport industry is not the only sector growing; the steel industry, for example, is expected to grow 13%. Higher oil prices have led to an increase in investment, which has been behind the country’s growth. As a result of this economic growth, the transport industry is expected to double in size. The government is also planning to introduce fuel price subsidies, which I expect will increase the demand for rail. Along with the networks already mentioned, the 20-year development vision regarding railway networks plans to build an express passenger railroad in order to connect major metropolitan and tourism centers. The plan also aims to connect the country’s major ports, as well as its mining, manufacturing, industrial, agricultural, and provincial centers. To eliminate bottlenecks in the system, we plan to use two lanes or electrify high-traffic lines. We will use the newest and most advanced technologies available for rail. By building these new routes, we will dramatically cut the travel time for passengers and goods. We have the best consultants and contractors who are qualified and competent to complete the projects. We have an international and unparalleled managerial and operational team. We plan to train rail experts in Iran and look into the possibility of training experts in other countries.