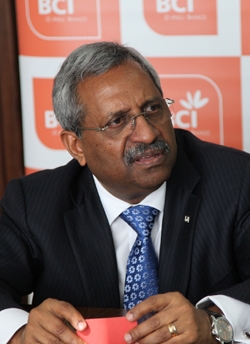 Aiming for the Top

Ibraimo Ibraimo was born in 1951 and obtained his Bachelor’s degree in Law from Eduardo Mondlane University. He later obtained a Master’s degree in Legal Business Sciences from Classica de Lisboa University. Between 1969 and 1991 he developed a career at the Ministry of Finance. In 1991 he established the offices of Ernst & Young in Mozambique and headed the company until 2007 as Country Managing Partner. He has been CEO of BCI since 2007.

Share on:
How has BCI developed since its restructuring in 2007? Five years ago, the country’s top-ranking bank occupied a 47% market share, while we had a 22% share of the market. […]

How has BCI developed since its restructuring in 2007?

Five years ago, the country’s top-ranking bank occupied a 47% market share, while we had a 22% share of the market. At the moment, we are still in second place. However, the top-ranking bank currently has just 34% of the market, and BCI now has 30%, so the difference is narrowing. Naturally, our competitors are not sleeping—they are seeking to match our development. If we continue to make investments, offer services that local people demand, and serve SMEs, we are confident that we can become first in the market. I believe that we are already the best bank in terms of services. My shareholders are pressing us to be the top bank in Mozambique, and I think that it will be possible in the medium term.

How do financial problems in Portugal affect BCI and its shareholders?

Caixa Geral de Depósitos (CGD) is the biggest bank in Portugal, and it is a sovereign bank. That is a minor problem because it is the state bank and it owns 51% of our shares. The other bank in Portugal is BPI, an investment bank chaired by La Caxia from Spain, Itaú from Brazil, and now Isabel Dos Santos from Angola. They own 30% of BCI’s shares. Of the other 19% of the shares, 18% is owned by INSITEC Group and 1% is owned by individual shareholders. In terms of how the situation in Portugal impacts us, for the entire five years we have been making important goals to make up for the fact that the shareholders do not invest fresh money; we are putting the money in. The unique condition is that the shareholders have to leave 75% of the dividends in Mozambique. With that money, we are banking in Mozambique. Therefore, we have not felt any impact from the situation in Europe. However, we are managing the bank bearing in mind that we do not have backup funds. As a result, we have to be prudent with our management.

To what extent do you attribute the success of Mozambique’s banking sector to sound regulations?

The financial system is very well guided by the Bank of Mozambique. I consider the central bank of Mozambique one of the best in the region and one of the best in Africa. Historically, banks in the area have experienced some problems, which led the World Bank and the IMF forcing them to build a supervisory bank system. I believe that we have achieved a good system. We are very confident because we excellent good regulators, and we faction as a good advisor for the system.

“The IFC in the US told us that we have the best program for women in Mozambique.”

How is BCI working to increase the penetration of financial services in Mozambique?

BCI is a private and commercial bank that encourages SMEs to grow. We are orienting the bank in terms of local necessities, building a variety of products that are tailored depending on the region. The country is very large and the people come from different backgrounds—residents in Maputo are very different from those in Nampula. We tailor our branch services according to region, whether the demand is related to agriculture or mining. We offer products suited for the local people and train employees for different regions. Normally, two or three of our people are from the same region, which helps the bank better serve local people. Our motto is “Eu sou daqui,” which means “I am from here.” We also involve local content in terms of advertising. We have 1,800 people at the company; only 12 are expatriates. However, this system is not easy—we heavily invest in training and travel so that we can learn about each of the regions. Currently, all of my directors except three are from Mozambique. They know what local people want and how we can serve them. I think that this makes a difference.

With more than 70% of Mozambique’s workforce in the agricultural sector, how is BCI aiming to penetrate the underserved SME market?

More than 73% of people in Mozambique are living in rural areas dedicated to subsistence agriculture, and it is not easy to put these people in the banking system. For us, it is a cost. None of the commercial banks want to give credit to the agricultural sector because the risk is very high, the return is very slow, and the profit is very small. People from the agriculture sector cannot develop at the same pace as commercial interest rates, which are very high. However, we are the first bank in Mozambique to have experience in two or three specific projects with USAID, AFD, AICEP, and the Italian government. Five years ago, USAID told us that it wanted some help from commercial banks to support the agricultural sector for the production of crops such as cashews and tomatoes, for example. We told it that we would join the project under two conditions. One was to share the risk and present it to our shareholders. We took 50% of the risk and invested $20 million. Now in Nampula, the cashew sector is completely developed. We also have five or six factories for the production of cashew. Of the total $20 million, we only spent $500,000 on this project, which has been very successful. However, it is a risk and there are some problems. In my opinion, the government should create a development bank to play this role.

What impact have BCI’s partnerships with international finance development organizations made on Mozambique’s finance sector?

All of the programs with organizations such as USAID, the French Development Bank, and the IFC are dedicated to SMEs. We have one specific program with the IFC, which is for women who run SMEs. It has been a complete success. The IFC in the US told us that we have the best program for women in Mozambique. Unfortunately, there are still commercial issues, which are mainly interest-related. We have a specific program that supports women by training them, but the interest rate is high. Regardless, the BCI, the city, and the country believe in the program and this is why we continue to invest here. In addition, we are convincing the shareholders to invest more. We currently operate from 130 branches. Five years ago, we had 41 branches, with no specific credits for the bank. Now, we are number one in the country in terms of credit, and we issue cards to everyone. In addition, facilitating the credit card process for others to who follow our example, we are monitoring the system and training more people. On August 1, 2012, we launched a completely new innovation on the market—the possibility to transfer money from your account to anywhere else. The recipient of the money does not have to have an account with BCI. You send the money from your mobile, and as long as I receive the code I can go to the ATM and take out the money. We will be the first bank to do this in Mozambique, and it will benefit everyone—from an agriculture company in the interior of the country, to teachers and health workers located in the middle of the country where it is difficult to get their salary.

What role do you think that these technological advances will have?

There are two major issues we face when developing new technology, which are not associated with the technology itself. One is with electricity—in terms of quantity and quality—and another is with the level and quality of communications. When we install ATMs in the middle of the country, we do not have the comfort of energy from electricity companies. We have to put our own generators there. We do not have the comfort of communications technology from communications companies. We have to put our own small satellite there to guarantee that. We have all of these branches and ATMs but they are all online in the central systems. You cannot imagine the challenge it is to set up even one ATM. That is why some of our bank services are more costly.

What is your portfolio of international companies that have already signed up with BCI?

We received a few companies from our shareholders. I think that the services of BCI locally are attracting all companies from a variety of sectors. We have some international companies that work with other banks internationally, but work with us here because they appreciate our services. We also have some international institutions here working with us. However, the bank has a disadvantage when compared with other banks because we are not in every region of the world. One year after arriving in Mozambique, large organizations are looking to work with us; we are working now with Anadarko, Rio Tinto, and South African Breweries and others. BCI enjoys a good relationship with these big companies, and through them we are serving the company itself and its employees.

What are BCI’s chief targets for the medium term?

We are currently drafting a plan for the next three years. We are focused on growth, which we want to be at least 20% per year. It is a challenge, but when I started this project at BCI, the shareholders told me that in the first three years there would be no bonus. The company would invest in the first three years, without expecting any profits. However, in the first year we duplicated the profits, seeing 50% growth. In the third year, we grew by 20%. I believe in this country, our banking system, and my people. I think that we have the best people in Mozambique working at the bank, with 82% of our workforce under 33 years old. The potential is enormous, albeit risky, but the next three years will be crucial, and we will continue to grow. The growth is based on the development of the retail bank, which relies on SMEs and individuals. When we started the program the company was composed of 10% retail and 90% corporate. Now, it is at 30% retail and individual and 70% companies. We want to reduce companies and make the ratio 50/50 to see profits increase.