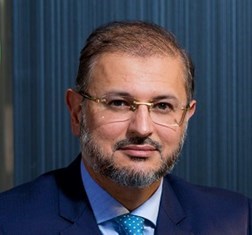 In 2014, Ahmar Azam joined Leejam Sports Company, the Company behind Fitness Time brand, as the CFO, where he was responsible for the preparation of the IPO and leading the company through its corporate transformation. After the successful IPO in September 2018, he was appointed as the CEO. In 2011, he came to Saudi Arabia as the Divisional CFO of the Obeikan Investment Group. Prior to that, he built his career between US and UK. Azam has broad global senior executive and leadership experience spanning over 20+ years. He holds a bachelor’s degree in economics and finance from the London School of Economics and Political Science. He is a Fellow Chartered Accountant from the Institute of Chartered Accountants of England & Wales (ICAEW). He also serves on the Middle East Advisory Board of the ICAEW. In addition, he is also an independent board member of the Audit Committee of the International Cricket Council.

Share on:
“At the moment, most of our staff in our fitness centers are Saudis, though our trainers are mainly non-Saudis.“

What were the main objectives for the IPO in 2018, and how would you evaluate the company’s journey and the current positioning in the market?

Over the past 12 years, our company has evolved from Leejam 1.0 and Leejam 2.0 to Leejam 3.0. Back in 2006, when the company was formed, the owners began with opening fitness centers. This caught on rapidly, and Saudis began to include fitness as part of their lifestyle, bringing excellent returns for the company. That was Leejam 1.0. However, as the business grew, the founders decided to take the company public. In 2013, they were advised to have a private equity partner on board to lead the company through its next phase of growth – Leejam 2.0. At that time, we had three missions: corporate transformation, investment in senior management for business continuity, and a successful IPO. Around 75%+ of the current management was hired during this phase. Leejam went through its IPO in September 2018. It was in fact the most successful IPO in the GCC in the past couple of years, with a stock price that has increased 78% since IPO. Today, Leejam is worth well over USD1 billion and has around 4,000 employees.

What are some of the trends in the market following the increased attention for sports under Vision 2030’s Quality of Life program?

Two things happened in Saudi Arabia, and we could not have been in a better place at a better time for our fitness business. The first major development was more opportunities for women. With that, the market grew overnight by 50% in 2017. Since then, we have opened 29 female fitness centers in Saudi Arabia. By the end of 2019, we will have 40 female centers, making us the largest player in this category today. Also, in 2018, we took over the Princess Noura University Fitness Center, the largest female fitness center in the world. The second major development was the Quality of Life program under Vision 2030, with great attention paid to encouraging healthy lifestyles. We work in close coordination with the government on how gyms should be designed, with male and female sections.

What is your vision for creating meaningful jobs for Saudis?

At the moment, most of our staff in our fitness centers are Saudis, though our trainers are mainly non Saudis. Right now, Saudi-born fitness trainers as a concept, especially in the male category, almost do not exist; however, we are working with Quality of Life and the MISK Foundation to create programs within universities and other diploma certificates that will allow Saudis to become fitness trainers.

What are your thoughts on future expansion, both within the Kingdom and in the GCC region?

We already have a presence in the UAE with locations in four of the Emirates. There is also strong interest from Kuwait and Oman. However, when the female opportunity in the Kingdom opened up, we did not want to miss it. We have not opened up other locations in the GCC yet. In the next four to five years, we will continue to add 15 or more centers each year across all categories, focusing on our existing geographic footprint, which is Saudi Arabia and UAE, as well as expanding in the GCC.