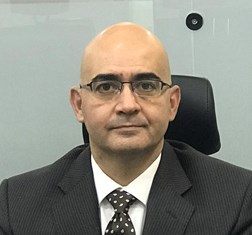 Ahmad Amoudi is currently serving as the General Manager of CRIF Jordan – the local branch of CRIF Group. He was appointed to develop and manage Jordan’s first full-fledged credit bureau following more than twenty years of demonstrated career success developing and implementing operational strategies to promote organizational growth and optimal utilization of emerging technologies. During his professional career, he has built up extensive experience in Business Development in the fields of Financial Services, Microfinance, MSME & Microinsurance. He has worked for many US-based and International firms such as Washington Square Securities, ReliaStar, and ING Financial Services. He holds a BSc degree in engineering from the University of Miami and a master’s in business administration from the New York Institute of Technology. As General Manager of CRIF Jordan, he is fully committed to supervising the development of the Jordan Credit Bureau, liaising with local stakeholders, credit providers, and banking and microfinance organizations.

Share on:
“The Credit Bureau Law was passed in 2010 in Jordan, making it possible to establish a credit bureau.“

October 2018 marked two years for CRIF Jordan. What have been your focus and main achievements thus far?

The Credit Bureau Law was passed in 2010 in Jordan, making it possible to establish a credit bureau. Since the law mandated that banks join the credit bureau once it was up and running our focus in the first year was on getting banks into compliance. The second year was about bringing into the credit bureau the non-bank financial institutions, which is all the lenders in the financial sector that are not obligated to join. The efforts were highly focused on adding value to the credit bureau by having more members outside of the banking sector. In 2018, we focused on the leasing and microfinance sectors, as well as insurance companies and telecoms. We have succeeded in engaging seven out of eight microfinance institutions who are members of the MFIs network “Tanmeya.” Telecoms are extremely important and we hope that they will be joining very soon. If you follow the Doing Business report which is published annually by the World Bank, Jordan receives a rating (in the getting credit section) that is highly dependent on the credit bureau coverage. The data that comes from these entities is important to us, and it improves access to finance, especially for non-bankable people and small entrepreneurs. Currently we have 53 members in the Credit Bureau, 25 are banks, while 28 are non-bank members from across all the different sectors.

What role does digitalization play in CRIF, and which innovations are you focusing on?

Financial institutions nowadays are competing for customers through innovation. One of which is offering and processing loans online in a digital format. As well, the Central Bank of Jordan is making efforts to promote digital finance. We are working with banks to ensure that they are working digitally with us rather than printing and processing reports. Basically, we are offering our service in a digital format (application to application-A2A) and supporting the banks to adopt and integrate into their systems, that is in addition to introducing other services that would support the digitization process such as the bureau score. Through A2A and bureau score, banks can streamline the entire process of the application, credit risk assessment, and then loan origination and disbursement. It increases the competitiveness of the banks, speeds up the process, removes subjectivity, and gives consumers the opportunities to shop around. We are working with the World Bank on a Digital Lending Platform project for energy efficiency and renewable energy loans specifically. It is a digital platform that allows you to shop around for energy efficient products. After the product is selected, you can apply for a loan where all the banks are already on that platform. You can then get pre-approved by several banks and select which one you want to work with based on the terms offered. World Bank is planning to implement this project during 2019.

Are there services you are planning to expand?

When CRIF applied for the license as the country’s first credit bureau, we agreed with Central Bank of Jordan on multiple services to be introduced over five years. That is the natural evolution of any credit bureau; it starts with reports, then scoring, and then other value-added services. We are now in the process of getting our scoring service approved by our regulator so we can launch it early 2019. Banks are ready and waiting for it too, we hope to be receiving the approval soon. In 2018, we received approval from CBJ on a list of additional services that we aim to introduce to the Jordanian market. These are not value-added services, but complementary services such as business information reports for institutions to be able to pull on local and non-local companies, which is also valuable for import and export operators. We will also be producing a public information report, which is information gathered from public sources and consolidated in one report. If you need to inquire about the general behavior of a client from noncredit standpoint, you can look it up there. We are also planning to introduce a service called Legal Entity Identifier in which we act as a Local Operating Unit issuing IDs to companies using the Global Legal Entity Identifier Foundation system which companies can use to identify themselves globally. We are also looking at introducing a blockchain based identity verification for individuals using distributed ledger technology, which offers identities for individuals that can be used globally. We aim to create a digital wallet that contains a lot of information from authenticated sources. If you want to buy something online or sign up for classes at a university, as well as do taxes or register a vehicle, for example, everything is there in that wallet. It begins with a digital identity for that person and then uploading data to it to get in control of releasing the information to any source globally. All these projects are in the pipeline ready to come online one at a time. Some of the services are sequential, and we have to offer one before we can move to another. Others are more independent like blockchain identity and legal identifier. We also have another service called SkyMinder, which is a global business information report on companies around the world which we will make it available in Jordan. We will make it available in Jordan so that institutions can inquire about companies in other countries.

What is your outlook going into 2019?

I am optimistic. The way we look at it, we want to show our older members how much effort we have been putting in to bring more value to them. Second, we want to extract more value out of the data that we have, and scoring is a part of that, as are the value-added services. Third, we want to present some of the services that have been approved and introduce them within the next year or two. We want to focus on the retailer side and include them into our platform. There is a part of the market that is in the shadows still, and we can reveal it. We believe we play an important role in bringing all of these people and sectors together. We do feel that we are in a hurry; we have been talking about the credit bureau since 1989, but we only launched two years ago. We are satisfied in terms of go live speed, bringing services to life in a short period of time and working with the contributors to improve data quality. To that end, we also believe that the work done by Crif Jordan and the bureau members has amounted to a an excellent job as the hit rate reached 78% within the first two years of operation, which means that out of 100 people you may inquire about, you will find the information you are looking for 78% of the time. And that is a very good rate. We hope to reach 80-82% by the time we engage all the rest of the sectors in Jordan. The higher the hit rate, the higher the chance of people accessing finance, as long as they have good credit. Even though the economy is weak and consumer confidence is low, one of the things I am optimistic about has to do with the borders between Jordan and neighboring countries such as Iraq and Syria. We will soon resume export and import with them and banks and merchants have to be ready.