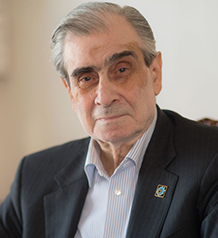 Seyed Ahmad Taheri started his banking career in 1956 when he joined Bank Melli of Iran. During these 60 years of experience, he assumed different responsibilities in Iranian and international banks. Along his vast experience, he served as the Managing Director for Iran Overseas Investment Bank, Country Manager for UK operations of Middle-East Bank and Mashreq Bank, General Manager of National Bank of Sharjah, and Managing Director & CEO of EN Bank and Saman Bank. He holds a degree in English literature from Shiraz University and received courses in domestic and international banking in the UK with Midland Bank and Bank Melli.

What is the bank’s status after completing its Five-Year Strategic Plan?

We are a relatively young bank with only 17 years of experience. However, we are also among the oldest private-sector banks established after the 1979 revolution. In order to compete with state-owned banks that are more than 80 years old and have 3,000 branches all over the country, Saman Bank started its operations by concentrating on electronic banking services and opening a limited number of branches in strategic locations. We maintain our position as being the pioneering bank in e-banking. That was the bank’s strategy until 2008, when sanctions began to be imposed on the country’s banking sector. Since 2008, Saman has been focused on corporate banking and expanded its network of international correspondent banks. I am proud to say that the reputation of Saman Bank, particularly in the international arena, is excellent. We are well known internationally and have a strong reputation among European and non-European banks thanks to being at the forefront in implementing our AML and compliance units as well as the quality of our services offered. Wherever we go, we are well known. For example, when I went to Vienna to meet a number of Austrian banks, they are keen to expand their operations with us and start a business relationship. We have noticed that European banks are interested in cooperating with Iranian banks, especially with Saman Bank, now that the limitations created by the sanctions, particularly for correspondent banking relationships, are over to a great extent.

How do you assess the value of your Investment Advisory Services for domestic companies to develop international trade?

We offer trade-financing services to the major companies in Iran. The most important part of our activities during the last six years has been focused on domestic companies involved in basic commodities, as well as pharmaceuticals firms that import raw materials from overseas and deal with major producers such as Bayer or Novartis. In fact, 40% of pharmaceuticals products and approximately 20% of basic commodities imported to Iran are handled by Saman Bank. During the last six years, we have financed an average of USD5.5 billion of trade volume per annum. We will increase this volume of business, at least along the line of expertise that we have got experience in, but also for industries interested in our services. Moreover, we have designated a special branch exclusively to support SME exports from Iran. We offer various lines of credit and we create export financing for companies that need to buy, prepare, and arrange the shipping of goods. If they are exporting their goods to various companies in the long term, we can finance their shipping documents, discount their bills, lend to them, and wait for the maturity of the exchange to collect benefits from it.

What markets are you targeting to expand your network abroad?

First of all, we will establish offices in Europe. I am happy to say that we have received a license from the Central Bank of Italy to open a representative office in Rome, which will be operative soon. We also met the Italian Export Credit Agency (SACE) when the Minister of Economic Affairs of Italy visited Iran. After some encouraging talks and meetings, we built an excellent relationship to the extent that we signed a MoU in the private sector, in addition to their agreements with the Central Bank of Iran. We have already started our relationship through various transactions and levels of credit between Saman Bank and several Italian companies. This agreement shows the close relationship between both countries. After Italy, we are planning to open offices in Germany and the UK. Beside European borders, we are planning to expand to India and Turkey.