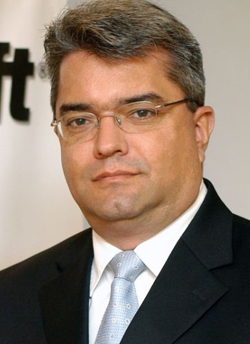 A Window on Things

Share on:
"Over the past three years, we have increased our revenues significantly."

What milestones has the company achieved in Panama since you became General Manager?

Microsoft’s presence in Panama spans over more than 15 years. We are one of the oldest IT companies working here directly from its own office. While other IT providers tend to work exclusively through their partners, we work directly with over 1,000 small companies that resell our products and services. I also have responsibility for liaising with the government. We work with the Ministry of Education and the Ministry of Commerce and Industries in assisting around 3,000 small companies to develop and grow faster, driven by technology. Three years ago Steve Ballmer, our former CEO, signed a Memorandum of Understanding (MoU) with President Ricardo Martinelli, outlining different areas for us to work on. Education, SMEs, and intellectual property rights were areas in which we would work and we also requested President Martinelli’s contribution. Panama is not a country with a strong history of intellectual property rights enforcement, and it formerly had a significant piracy rate of over 70%. Part of that piracy was impacting us heavily in terms of revenue, and particularly affected SMEs in terms of security and vulnerabilities. Although our main operation is dedicated almost exclusively to Panama, our staff also does work in several other countries in the region, because it is convenient for our people to travel from here to wherever they are needed.

In 2013, Microsoft began an initiative called CityNext to bring governmental services closer to citizens. How has this project developed?

Through this project we seek to support the government in different areas such as traffic, security, and health. We have experience in these areas having already provided successful solutions in many countries around the world, which we want to share with the public sector. The Panamanian government is dedicated to improving the urban landscape and reducing traffic to offer citizens a better quality of life. Naturally enough, technology has a key role in this process.

The Inter-American Development Bank, in partnership with Microsoft, is supporting SMEs in the local tourism sector through the Microsoft Innovation Center for Tourism. What was the strategy behind this initiative?

That initiative was also included in the MoU we signed with President Martinelli. In collaboration with the government, we designed, defined, and created application solutions for tourism. This demands financing and other resources, and will require a number of years before the effects become clear, and is therefore a worthy long-term commitment. We want not only to work in tourism, but also in other sectors. We have begun in tourism, however, because it contributes significantly to GDP.

“Over the past three years, we have increased our revenues significantly.”

What is the importance of social responsibility for Microsoft in Panama?

Social responsibility is an important element of Microsoft’s ethos, to which each staff member is required to dedicate part of their time. We are carrying out initiatives with prominent families, as well as with the government. Most recently we have also provided software to schools, at an investment of close to $150,000. In partnership with the Ministry of Education, we provide students with a reduced-functionality, heavy-duty laptop called the Balboa Classmate. It has Microsoft Windows and Office. The software was given free and is now used by more than 150,000 students. We have also introduced students to the Windows 8 touchscreen and cloud solutions and are close to providing 100% cloud solutions and Office 365 to university students. We offer over 200,000 university students our technology at no cost, and have invested more than $65 million in education-related technology in Panama over the past two years.

How would you assess your financial performance in Panama?

Over the past three years, we have increased our revenues significantly. I was assigned to Panama to increase growth, and to keep pace with GDP, which in previous years was growing faster than Microsoft. We therefore adopted an aggressive strategy to keep pace, while investing in the country, by bringing more talent in and hiring more local staff than ever before. That is part of the reason behind our marked investments in education. This is the only means of staying ahead in the future. Panama will need close to 10,000 new engineers over the coming five years, yet there are currently less than 1,600 university students studying engineering. Panama is following Singapore’s model, as 50% of that country’s population is comprised of locals, with 50% being foreigners. Sooner or later, the same scenario will repeat itself here. Importing talent is the only means of keeping up with local universities that are not able or capable of developing the talent we need to maintain growth.

Public and private R&D investment in Panama represents less than 0.3% of GDP. What is your assessment of this?

It is too risk-laden a venture for a company like Microsoft to establish an R&D facility in Panama due to the prevailing piracy rate. Intellectual property rights are not yet well established here, which curbs the opportunity of pursuing R&D. It would be difficult even to support small third-party companies to develop local intellectual property at this level. We do have good laws and regulations that stipulate penalties, and yet the reality is that the regulations are not enforced. In this context, we are working with the Ministry of Commerce and Industries by proposing the idea of training its staff to understand how to identify companies and individuals contravening the law. It is not always easy to understand what is legal and what is not in the software industry.

What role could Panama play as a regional technology hub?

What we have in this market is a logistic hub, which is totally different. Indeed, the main contributor to GDP growth in Panama is the logistics sector. Construction’s contribution to GDP is growing, although predominantly in terms of the building of logistics facilities, centers where operations are run like a distribution service. The Panama Canal is the main factor of course, but COPA, the national airline, is also growing in terms of logistics. The economy is growing through finance and logistics, both of which are the key engines of growth today. This is the main reason why companies such as Caterpillar and Procter & Gamble are establishing their regional headquarters here. However, from a technology perspective, Panama will not become a technology hub in the short term. This said, it could become a reference point for technology application, as we know that it will see the establishment of remarkable smart cities.