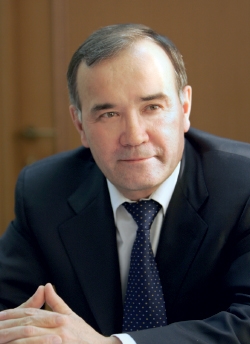 Kairgeldy Kabyldin became General Director of KazTransOil in 2011, and has over 30 years of experience in the petroleum industry. He graduated from the Kazakh Polytechnic Institute in Electrical Engineering.

Share on:
One of the main goals of KazTransOil is to improve the oil transportation network, as well as the import and export of oil products in Kazakhstan. What is your strategy […]

One of the main goals of KazTransOil is to improve the oil transportation network, as well as the import and export of oil products in Kazakhstan. What is your strategy in pursuing this goal?

KazTransOil, being the national operator of the Republic of Kazakhstan over the main oil pipeline, manages the development and integration of the domestic system of main oil pipelines as the main priority of its activities. This involves an array of arrangements aimed at improving the reliability of facilities for oil transportation and throughput, the competitiveness of services, as well as creating the necessary contractual framework for oil transportation through the territory of transit states. KazTransOilseeks to maximize its involvement in existing and new oil pipeline assets in the Republic of Kazakhstan, as well as in major international oil transportation projects. KazTransOil has carried out extensive work over a period of 17 years to modernize and upgrade the production infrastructure; more than 1,000 kilometers of major pipelines were replaced, while 60% of them now have a renewed tank farm; four oil loading/unloading rail racks were built and reconstructed, and the capacities of oil terminals in the port of Aktau were increased. We worked on the Alibekmola-Kenkiyak and North Buzachi-Karazhanbas pipelines, as well as the Atyrau-Samara section of the Uzen-Atyrau-Samara main pipeline. In addition, we rebuilt existing oil pumping stations and new ones were constructed. Progress was also made with the Tuimazy-Omsk-Novosibirsk-2 project. Moreover, the SCADA automated control system was introduced in the company’s facilities.

How will further oil transportation system development increase the energy security of Kazakhstan in the years to come, and what will be your role in reaching this target?

The energy security of the country largely depends on progress in the development of the fuel and energy complex, which in turn has numerous feed forward and feedback effects in all sectors of economy. One of the pillars of sustainable development for fuel and energy is the effective functioning of the multi-vector oil transportation system of hydrocarbon supplies to domestic and foreign markets. Given the country’s plans to develop the promising fields of the Caspian shelf, the issues of transport system development are becoming increasingly important, particularly taking into account the geographical location of Kazakhstan away from major world oil outlets. Kazakhstan currently has a diversified, multi-vector system for the transportation of oil for export. Existing export pipelines such as the CPC, Atyrau-Samara, and Kazakhstan-China provide access for Kazakh oil to Europe, to the terminals of the Black and Baltic seas, and the Chinese market.

KazTransOil owns a 100% share of Batumi Terminals Limited, which has the exclusive management rights over Batumi Sea Port. How would you characterize your operations in Georgia and the region?

Batumi Industrial Holdings Limited (BIHL) provides services for the throughput and storage of hydrocarbons, the throughput of dry cargo, as well as other services for transshipment through the Batumi Oil Terminal and Batumi Sea Port in Georgia. The strategic goal of acquiring these assets on the Black Sea coast was to establish an important alternative oil transportation corridor with direct access for Kazakhstani oil and petroleum products to the liquids market. In doing so we have ensured the presence of Kazakhstan in the Black Sea and taken control over this strategically important route for the growing oil exports from the Caspian region.

What future projects are you planning in the medium and long term?

The company has approved a number of investment projects aimed at improving the reliability and safety of oil transportation facilities, meeting the needs of the oil industry for transport capacities, diversifying export destinations, and creating economically attractive routes for shipping. Medium-term projects include the second phase of construction of the Kazakhstan-China pipeline, reconstruction of the Kalamkas-Karazhanbas-Aktau and Uzen-Zhetybai-Aktau main oil pipelines, and increasing the capacity of Batumi Sea Port. The further development of the Kazakhstan-China pipeline involves an extension of the full capacities of this pipeline system by up to 20 million tons per year, with an appropriate guaranteed resource base being made available.