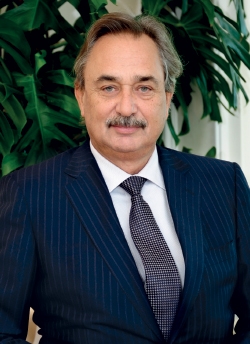 A Venture Worth Having

Pierre Offant is Managing Director of the North Caspian Operating Company (NCOC), the operator of the North Caspian Sea Production Sharing Agreement (NCSPSA). He has a background in Mechanical and Petroleum Engineering and holds a PhD in Economics. He began his career at Elf in 2007, quickly moving through the ranks, later taking up a position with Total Group as Chief Purchasing Officer. In 2008, he moved into his current position.

Share on:
Could you tell us about project milestones since 2009, when the North Caspian Operating Company (NCOC) became the official operator under the NCPSA? Since 2008, I have had the privilege […]

Could you tell us about project milestones since 2009, when the North Caspian Operating Company (NCOC) became the official operator under the NCPSA?

Since 2008, I have had the privilege of working here in Kazakhstan as Chairman and Managing Director of NCOC, the delegated operator of Kashagan and other fields within the contract area on behalf of the seven venture partners. The history of NCOC dates back to January 22, 2009, when the new joint operating company took over from Agip KCO as the sole operator under the North Caspian Production Sharing Agreement (NCSPSA). In terms of milestones, several merit specific mention. One of these was reached in July 2010, when the well operations team at Agip KCO safely passed a total of 220 kilometers of wells drilled since work began on the consortium’s first well, Kashagan East-1, back in 1999. The team has safely drilled more than 40 wells to date. To put this achievement into perspective, 220 kilometers is the equivalent of over 600 Eiffel Towers. The most important milestone was, of course, the start of production in September 2013. Unfortunately, due to certain technical issues we had to cease production thereafter, and today are now working toward a safe resumption.

The Kashagan field is regarded as one of the largest oil discoveries of the past 40 years. How will it influence the market once it achieves full production?

This is not just one of the largest oil discoveries of the last 40 years, but also one of the world’s most complex industrial projects and the largest oil and gas project currently being undertaken. I am convinced that Kazakhstan’s first offshore oil and gas project will play a significant role in fostering a better future for the nation. Beyond oil and gas development, our mission is to make a strong and sustainable contribution to the development of the local and national economy of Kazakhstan by generating substantial tax and royalty revenues. At its peak, the project has employed over 40,000 people, while thousands of Kazakhstanis were trained, infrastructure built, and thousands of local companies prospered. We are committed to the continued enhancement of local content development for the benefit of the Kazakhstani people. To date, we have invested over $10 billion in the local economy, which makes us one of the largest investors in country.

What have been the highlights of your development strategy for the Kashagan field?

The strategy, given the size and technical complexity of the Kashagan field, involves development in phases. Phase I, known as the Experimental Programme, has been completed, while further phases of development are at the conceptual stage, and being discussed with the government. As with any large-scale industrial project of this nature, various options and opportunities to optimize project development are being considered by the operator.

Considering your expertise in the sector, how would you rate the oil and gas sector here in Kazakhstan, and which trends do you foresee for the coming years?

With 30 years of experience working for Total in various places around the globe, I strongly believe that Kazakhstan has huge potential. With its enormous oil and natural gas resources, Kazakhstan can become one of the top oil exporters globally. And this is not just my view, but moreover that of international oil experts. According to the International Energy Agency (IEA), world global oil demand will continue to rise until at least 2020 and Kazakhstan’s role as a supplier of global energy needs will continue to grow.