Ogtay Shiraliyev graduated from the Department of General Health at the Azerbaijan Medical University in 1973. In 1974, he worked as a surgeon at the hospital of the Ministry of Internal Affairs of Azerbaijan. In 1977, he entered his clinical residency at the Moscow Institute for Medical Practitioners, in 1978 he was admitted to the postgraduate course of First Moscow Medical University’s surgical department, and in 1981 he completed his Master’s thesis. In 1981, he worked as a senior research worker at the Scientific Research Institute of Roentgenology, Radiology, and Oncology. In 1982, he was appointed director of the National Endoscopic Center. From 1983 to 1988, he worked as the Manager of the Azerbaijan Health Ministry’s academic department. In 1988, he was appointed as Director of the National Diagnostic Center. In 1992, he defended his doctoral thesis at the Moscow Oncology Center and was awarded the academic degree of a Doctor of Medicine. In October 2005, he was appointed Minister of Health. From 2005-2008, he was a member of the Executive Committee of the World Health Organization (WHO), and in 2007-2008 he acted as Vice President of the Executive Committee of the WHO. From 2009-2012, he was a member of the WHO Permanent Committee for Europe.

Share on:
TBY talks to Ogtay Shiraliyev, Minister of Health, on the new Health Cards, international cooperation and training programs, and progress in the sector.

The number of electronic Health Cards issued by the Ministry of Health in the first half of 2015 alone has increased by 13.5%. What data is stored on these cards, and how does this system contribute to the development of healthcare infrastructure?

The application of this system started in December 2007. The objective behind the introduction of this system was to improve control over people’s health and quickly create a database of public health. The data stored on Health Cards accumulates in the Health Ministry’s Information Center. The data (date of an illness, examination, treatment, medication prescribed, inoculations, medical insurance, etc.) allows the card holder the opportunity to undergo prompt and precise examinations. Data on newborns is uploaded to the system by maternity hospitals or maternity departments of other hospitals that subscribe to the system. The data stored on the microchips of these plastic cards gives holders the opportunity to undergo quality, effective, and prompt examination and treatment and enables the registration of medicines provided to the vulnerable population. To date, a total of 1,060,803 people have received electronic Health Cards and the process is under way.

How does the Ministry assist aspiring medical students in Azerbaijan to study at medical facilities and universities abroad, and how does this help advance the domestic medical industry?

Governed by the objective enshrined in the State Program on educating Azerbaijani youths in foreign countries, numerous Azerbaijani medical students have attended courses at leading European clinics. In addition, doctors of medicine from Europe have organized different theoretical and practical courses in Azerbaijan. In 2015, a total of 335 medical students took advantage of this state-funded program and medical students from Azerbaijan were involved in theoretical and practical exercises organized by specialists from the Russian Medical Academy of Postgraduate Studies, Sechenov First Moscow State Medical University, Minsk Bone Marrow Transplantation Center, and the American Heart Association. Azerbaijani doctors also attended courses held in Turkey, Japan, Italy, Russia, Israel, and Belarus. As part of our efforts to expand international relations, we organized a residency program for young doctors in Germany and Turkey. The overall level of healthcare in the country very much depends on the knowledge and competence of doctors. This is exactly why the Baku branch of Sechenov First Moscow State Medical University was established in 2015. Addressing the opening ceremony, the graduate and honorary professor of this University, Mehriban Aliyeva, said the opening of Sechenov First Moscow State Medical University in Baku would contribute greatly to the training of qualified medical doctors in Azerbaijan.

How has cardiac surgery progressed in Azerbaijan in recent years?

Cardiac surgery, including pediatric cardiac surgery, is developing rapidly in the country. The head of state always keeps this area in the spotlight. Operations on the heart require immense resources and a high level of professionalism. In the past, Azerbaijani citizens would go abroad for heart surgery, but now citizens of a number of neighboring countries are now coming to Azerbaijan for operations of this nature. The cardiac operations performed in leading European and American clinics are now carried out with equal success at the Azerbaijan Children’s Surgical Center. In 2015 alone, the medical institutions of the Health Ministry carried out around 2,000 cardiac operations. There have been newborns who underwent surgery on the first and fourth day of their lives, or weighed 2.5kg. The Surgical Center currently performs operations on such congenital heart disorders as Tetralogy of Fallot, total anomalous pulmonary venous return, cardiac ventricular insufficiency, transposition of the great arteries, and hypoplastic left heart syndrome, for example. Our doctors are not lagging behind their foreign counterparts and we intend to further expand on this. The government continues to create suitable conditions for our doctors to brush up on their knowledge and skills in foreign countries.

How is the Health Ministry involved in the organization of the Formula One Grand Prix in Baku?

The Health Ministry is taking all necessary measures related to the organization of the Formula One European Grand Prix in Baku. Qualified teams of doctors and clinics with the latest medical equipment will be available to representatives of all teams, participants of the competition, and visitors to Azerbaijan during the competition. Our doctors are already experienced in providing services during high-profile events. The inaugural European Games held in Baku last year were also a huge test for Azerbaijan’s healthcare system. Around 900 doctors were involved in the provision of medical services during the Games. Medical aid stations were set up in the Olympic village, as well as competition venues in Baku and Mingachevir. A total of 6,381 people applied for and received qualified medical aid during the Games. International health experts gave a very high assessment to the level of medical services provided. Our health workers are ready to provide visitors and participants with a high level of service during the Formula One European Grand Prix in Baku.

The 2015 parliamentary election in Azerbaijan signaled the beginning of a new era in the country. What objectives does the Health Ministry intend to accomplish in 2016?

The effective social policy pursued by the government has paved the way for the dynamic development of healthcare in Azerbaijan. A number of important health laws, state programs, and other regulatory acts have been adopted on the initiative and under the leadership of the head of state. The material and technical infrastructures of health facilities have been upgraded, new medical technologies have been built, examination and treatment methodologies were applied, and measures were taken to train qualified medical professionals. New medical facilities fitted with the most sophisticated medical equipment are being established throughout the country as part of the State Program on the socioeconomic development of the regions of Azerbaijan. This work is financed from the state budget and the state investment fund. In 2016, we plan to commission the Scientific Research Institute of Obstetrics and Gynecology, the Central Reference Laboratory of the National Station for Town’s Disease, central hospitals of the Agsu, Bilasuvar, and Zardab districts, and other medical facilities. Thanks to the improved infrastructure of our existing medical facilities, the introduction of new technologies, and the stable provision of medicines and food, the volume and quality of our services has dramatically improved. The level of services provided in priority spheres of healthcare have signification improved, especially in areas such as mother and child health, diabetes, hereditary blood diseases, chronic kidney insufficiency, tuberculosis, and immunological prophylaxis of infectious diseases. The adoption of state programs on the protection of mother and child health has led to a reduction in child diseases and infant mortality. Regular medical examinations of children have also played an important part. According to our initial estimates, more than 92% of kids underwent checkups as part of this campaign in 2015. Of these, 6% required treatment, and half of those have been discharged following relevant treatment. Major strides have also been made in treating hereditary blood diseases within the framework of state programs. More than 15,000 people applied to the National Thalassemia Center in 2015. At present, more than 2,500 patents are receiving regular treatment at the Center. I am proud to say that the National Thalassemia Center can successfully conduct bone marrow transplantation operations, which represents a radical methodology of treating hereditary blood diseases. In 2014-2015, a total of 25 children underwent bone marrow transplantation surgery. The material and technical infrastructure of medical institutions specialized in oncological treatment has been improved and the installation of positron emission tomography, which is considered to be the most advanced diagnostic method, has been completed at the National Oncological Center. The number of people suffering from chronic kidney insufficiency and receiving hemodialysis treatment has also increased in Azerbaijan. Despite this, the problem of hemodialysis treatment in the country has been fully resolved. A total of 2,800 patients are provided with hemodialysis treatment in 34 hemodialysis centers, including 26 in the districts. The number of kidney transplantation operations, which represents a radical method of treatment of such patients, is also increasing. The number of surgical operations involving the application of advanced technologies is growing by the year. In 2015, four children with congenital hearing problems underwent cochlear implantation operations for the first time in our history. Such surgical operations have been possible thanks to the availability of adequate infrastructure and qualified professionals. One of the key directions in the development of healthcare is education and personnel training. This area too has seen great progress. The specialized training of medical personnel in the country is carried out during residency. Residency is now provided by 40 clinics, which is four times more than in earlier years. The development of modern information technologies and the application of electronic software are among priority directions of the Ministry. With this aim, a single database of the healthcare system has been developed and work is now under way to enable its linkages with other databases. The electronic system of monitoring infectious diseases, which has received praise of the World Health Organization, is always being improved. Azerbaijan is now regularly represented on legislative bodies of the WHO. From 2005-2008, Azerbaijan was represented on the WHO’s Executive Committee, in 2007-2008 was its Vice President, in 2009-2012 was a member of the WHO Permanent Committee for Europe, and from 2012-2015 was its Vice President again. Although Azerbaijan completed its tenure in the WHO Executive Committee, we maintain working and expert contacts with it. The implementation of annual action plans together with the WHO, the UN Population Fund, and the UN Children’s Fund was continued in 2015, and will be continued in 2016 as well. 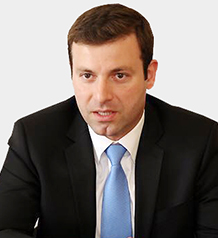