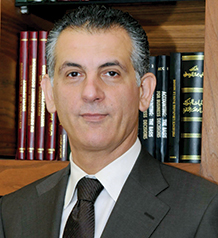 Abdul Razzak Achour was born in 1965 and has been the Chairman & General Manager of Fenicia Bank since 1994. He is also the Chairman of several committees, including Assets and Liabilities (ALCO), Anti-Money Laundry, Credit Rating, and Credit, and is the Chairman of the Board and General Manager of Bellevue Company. In addition, Achour is a Board member of the Children’s Cancer Center of Lebanon (CCCL). Achour has a degree in business administration and accounting from Lucien Coormans Institute and a degree in international commerce studies from ICAD-Paris.

Share on:
TBY talks to Abdul Razzak Achour, Chairman & General Manager of Fenicia Bank, on restructuring the bank, competing in the oversaturated Lebanese market, and attracting capital inflows from the diaspora.

What is the background of Fenicia Bank and how did your restructuring process contribute to a better identification within the Lebanese market?

Fenicia Bank first started in 1959 as Bank of Kuwait and the Arab World. After the Civil War ended, I joined a group of Lebanese businessmen to acquire the bank in 1992. As we took over the bank, in 1992, we started the restructuring process through enhancing the management by injecting new expertise in the first and second line of management, we introduced new standard operational procedures to streamline all processes and set clearance on job descriptions and reporting channels at all levels. Equipped with a fully Lebanese workforce, in 2010 we made a major leap in changing the bank’s headquarters, name, and logo in order to reflect our identity and our Lebanese roots. We also pushed the bank’s assets, we succeeded to increase the bank’s assets from USD10 million to USD1.5 billion, since we needed a solid platform to build on the new strategy we had planned. The challenge we faced in late 2000 was when we decided to compete with other mid-sized banks in Lebanon. We made it clear to our stakeholders that it was not our utmost endeavor to become one of the big players in the market, but to become the firmest and the strongest one. After the new management was implemented, we were able to achieve the best ratios in the market in terms of liquidity and return on equity; our shareholders have even been referred to as the happiest shareholders in the Lebanese banking sector.

As a mid-size bank operating in the oversaturated Lebanese banking industry, how do you fare amidst the fierce local competition?

We have a strong customer-oriented approach that allows us to know and understand the client’s needs. This is our niche expertise to build a solid and long-term relationship with our clients, which enables us to attract new customers and enlarge our customer base. Part of our DNA is to offer prime and quality service rather than acquiring a lot of customers; in other words, our focus is to become stronger rather than bigger. We share our accomplishments with our clients because their success is our success as well. We concentrate our business on the conventional banking transactions, and we are actually competing with the top-five alpha banks in Lebanon in terms of service quality and prices, despite the fact that we are a medium-size bank. Moreover, we have always been highly capitalized as our board’s direction demands. We play it safe and manage risks to mitigate their impact without sacrificing the satisfactory level of profit. This might seem to most players in the market as a moderate role; however, we have experienced success stories based on such strategy.

The diaspora is one of Lebanon’s major assets in terms of capital inflows. What channels do you use to attract them to Fenicia Bank?

The majority of our shareholders are part of this Lebanese diaspora. As such, we understand our Lebanese expatriate needs and requirements. We maintain good and long-term relationships with eminent Lebanese businessmen abroad and this kind of relationships ordain wide and large channels to meet the requirements of the Lebanese diaspora and reach out to their business fields, mainly in the GCC and western African countries where the Lebanese presence is vast. We have teams that regularly visit those countries and return with new relationships. We try to be next to the Lebanese expatriates side by side to help them meet their goals and succeed wherever they are. The diaspora trusts the Lebanese banking sector, because they are aware of the high caliber of the players here; they know we are accountable, compliant, and that we offer the best services in the market. Most banks in Lebanon are family owned, so this also plays in the favor of good accountability.