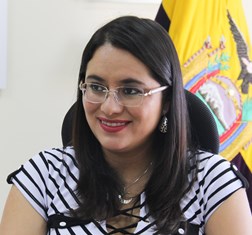 A Rosier Picture to Come

Verónica Artola Jarrí­n was appointed General Manager of the Central Bank in 2017, following an extensive career in public service. Before joining the Central Bank in 2015, she was Assistant Secretary General at the National Secretariat for Planning and Development (SENPLADES), Secretary of the National Planning Council, and Controller at the Superintendencia. Artola is an economist who graduated from the Pontificia Universidad Católica del Ecuador. She holds a master’s in applied economics from the Universidad Autónoma in Barcelona. She also teaches at the faculty of economics
of her alma mater.

Share on:
The Central Bank is enacting a series of forward-thinking new laws to boost international reserves and strengthen the economy.

How do you maintain a healthy and sustainable monetary policy?

The dollarization of our economy certainly presents us with a different set of monetary policy tools. These are the interest rate, the liquidity minimum reserves index, and the domestic liquidity ratio. In Latin America, only Ecuador and Bolivia have a maximum interest rate policy, which means we can fix the limits for banks and financial institutions when charging interest. If they do not uphold this, it is considered a crime, and they will be disciplined by the superintendencies. For several years now, we have been working dutifully on interest rates and currently have 15 different kinds of interest rates to strengthen the economy. Second, banks and financial institutions must have liquidity minimum reserves in the Central Bank. We have had requests to change the minimum reserves; however, we need them, as the Central Bank cannot be the lender of last resort like many other banks in the world. The cash flow from minimum reserves would help us in difficult times. In terms of the domestic liquidity ratio, 60% of a bank’s assets must be in Ecuador in order to remain prepared for any eventuality. These are the three main tools concerning monetary policies that we drive as a Central Bank. A fourth instrument is our liquidity fund, since we do not have a lender of last resort. Despite the fact that this is not a monetary tool, it is an instrument used by the bank. Currently, this fund is around USD2.5 billion and was contributed to by many different financial institutions. We consider these significant actions to strengthen the dollarization. Another role of the Central Bank is measuring liquidity in the economy and looking out for the present situation of the foreign exchange reserves, which is a concern of many investors. The work of the Central Bank is to restrict a part of the economy, because if it could move freely, money would leave the country on a large scale.

What is your current vision for the interest rate to encourage structural investments in productivity?

How will the new investment law impact the economy and your monetary policy?

The Central Bank, prior to the monetary and financial code of 2014, had its own inner cabinet made up of independent people. We now have a regulation bureau made up of state ministers. With the new investment law, the Central Bank needs to enhance its international reserves and strengthen the economy, so that the market will have greater trust in us. Two main changes were implemented in order to build this trust. First, the Reactivación de la Economí­a law seeks to generate new economic incentives. Beforehand, loans given out by the Central Bank needed to be paid with cash. At a certain point, the bank was accepting public bank shares, and around USD2.2 billion were paid in shares. Second, under the Fomento Productivo law, the Central Bank can no longer invest in the Ministry of Finance and Economy, and the shares that were paid must be returned, with the Central Bank receiving cash or bonds, which would increase profitability. Both measures would strengthen our reserves, painting a more positive picture for the international market.

How can the financial system be more transparent?

Recently, we launched a web portal where one can access historical information not previously available. Now we have information from the 1940s and 1950s, which enables greater transparency. We are working in cooperation with the national government, which is also concerned with being more open.