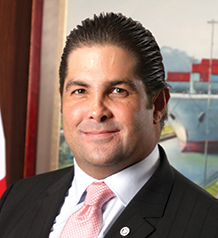 A Role to Play

Carlos G. Fernandez is a Civil Engineer, and graduated from the Worcester Polytechnic Institute with a Master’s in Construction Project Management (CPM). Currently he is the President of Constructores y Administradores de Obras, S.A (CAO). Founded in 2013, CAO focuses its activities on the construction and development of new projects, inspections, and general administration. In March 2015 he was elected as President of the Panamanian Chamber of Commerce, Industry, and Agriculture.

Share on:
TBY talks to Carlos G. Fernandez, President of the Chamber of Commerce, Industry, and Agriculture, on the Chamber's involvement in the nation's economy and politics over the decades, and the advantages the Panamanian market offers to international investors.

2015 marks the 100th year of activity of the Chamber of Commerce. What was the philosophy behind the creation of this institution, and what are the milestones achieved here over recent years?

The Chamber of Commerce was established in 1915 as an initiative designed to enable businessmen to meet and share common interests in the private sector and to develop businesses after the canal was opened in 1914. Ever since then, the Chamber has played a significant role in the private sector. From time to time, it has been involved in the fight for democracy. Looking back on all that we have done, there have been many presidents who were members of the chamber. We played an important role in the coup d’etat in 1968, and also in the cessation of the dictatorship in 1989. It was also the chamber that led the opposition in 1989. After that we assisted the new government in restructuring and rebuilding our economy. The private sector is now a vital force in Panama, and the nation has been one of the leaders of the past 10 years in terms of GDP growth, and the highest ranking in Latin America. We have a dollarized economy, which is stable, and also attractive for overseas investors. Panama has great connectivity through its airport, and our most important asset is the canal, which was handed back to the Panamanians in 2000. Ever since, the Panamanian government has been a great example of good management and sound investment in the economy. As a private entity we have grown with over 1,800 members today. We are divided into 15 groups or sub-chambers, with every chamber representing a different sector. We have coverage of industry, construction, and development, cars and motors, pharmaceuticals, law firms, advertisement agencies, human resources, education, logistics, and transportation, to name a few. Each sector is represented here, and each sub chamber has between 150 to 200 members. We have good representation on all of the important topics and sections of our economy.

What does the chamber do to protect its members and widen its memberships?

We offer many services through the chamber. We also have a legal department, which revises every law and initiative on the legislative and executive levels for the private sector. We are vigilant that none of these initiatives impair the security of business and the way we do businesses. We want to protect the private sector, and organize five to six expositions a year. The most important multi sector exposition is Expo Comer, which has been held for the past 33 years in March. We have representation and commercial exposure from over 30 countries and buyers and suppliers form abroad are also in attendance. We also instigate trade between other countries with which Panama has close relations. We also have expositions for the tourism sector, as well as the technology sector and medicine and health. Foreign nationals may also come to Panama and join our chamber. We also provide a medium for arbitration between members, and we are also leaders in social responsibility.

What advantages does Panama offer to the international community of investors?

We have the highest international direct investment rate in Central America. We have attracted close to 45% of the international investments in Panama and Central America, and we are doing a good job in that regard. We have the connectivity of the canals, and among the Americas, which makes it easy for foreigners to come and see what we have to offer. We enjoy political stability, and the economy, too, is one of our assets. Meanwhile, a convention center is being built, for which we have high expectations. The center will attract international multi-sector conventions to Latin America. The international business community will have greater scope to look to Panama, and perhaps establish a presence as a result. We have over 100 multinational organizations established here in Panama, which speaks to our potential. These companies have their regional offices here, and benefit from special treatment, while their investments create jobs. Our unemployment rate is the lowest in Latin America, and with employment comes peace, progress, and a great quality of life in the country.