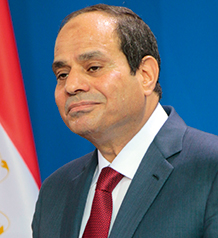 A Plurality Of Two

Abdel Fattah el-Sisi graduated from the Egyptian Military Academy in 1977 and served in the infantry before becoming the commander of Egypt’s northern military region. Following an uprising in 2011, el-Sisi was appointed to the post of director of military intelligence and was also the youngest member of the Supreme Council of the Armed Forces, a body of senior military officers who governed Egypt after Mubarak’s departure. El-Sisi was elevated to the positions of defense minister and commander of the armed forces in August 2012 and after the revolution of summer 2013, el-Sisi won the presidency with 93% of the vote and and was sworn into office as President of Egypt on June 8, 2014.

Share on:
Abdel Fattah el-Sisi, President of Egypt, on the historical brotherhood between Lebanon and Egypt, the importance of maintaining the Lebanese model of coexistence, and facing down the region's largest hurdles together.

The distinguished relations between Lebanon and Egypt are merely the culmination of the ongoing communication between the Egyptian and Lebanese peoples. The two civilizations are deeply rooted in history through cultural and social rapprochement and agree on a fundamental, visionary level about a wide variety of issues. Thus, I am also pleased to congratulate the brotherly Lebanese people on their success in completing a presidential election and forming a new government that enjoys the confidence of Lebanese citizens.

Egypt has always sought to preserve the stability of the Lebanese state and its institutions. In recent decades, it has continued to work with various Lebanese political forces to emphasize the necessity of adopting dialog as the basis for resolving its differences. Egypt was one of the first countries to embrace the Lebanese people’s ability to reach a political settlement without the intervention of external forces, all the while maintaining the “unique Lebanese model” of coexistence between every community, making Lebanon a leading model in the region for resolving political crises.

I would like to assure President Michel Aoun that Egypt will continue its support for brotherly Lebanon on all levels, and I am confident that his mandate will strengthen Lebanon’s status as a country of political pluralism and cultural diversity governed by the principles of participation and harmony among varying political forces. These sectarian or religious conflicts are alien to our region and trying to rob the Arab Orient of its historical uniqueness as a place of coexistence and convergence between religions and sects. A strong and stable free Lebanon is a powerful factor for the Arab nation, and we will provide all the support it needs to maintain stability and continue its reconstruction and development.

We have agreed on the importance of strengthening triangular cooperation in Africa to promote the industries and products of the two countries on the African continent. I am pleased to hear President Michel Aoun’s vision of developing relations between our two brotherly countries, which is enjoyed by the Egyptian community in Lebanon.

We also agree on the importance of combating terrorism and resolving the Syrian crisis and the refugee crisis in Lebanon. We also agreed that the two countries should stand together against the dangers of terrorism. This has been expressed Egypt’s readiness to support the Lebanese army and its various security services.
We have also discussed preparations for the Arab Summit to be hosted by the Hashemite Kingdom of Jordan, which we are all working on in order to successfully face the difficult challenges facing the Arab nation at this delicate stage in its history.