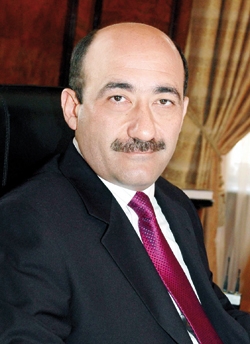 A Place to Be Seen

Minister of Culture and Tourism, the Republic of Azerbaijan

Abulfas Garayev began his career in politics in 1978 as a teacher in Saatli district. For five years beginning in 1980 he was involved with the Youth League, and later became a Junior Officer in the Organizational Department of Narimanov District’s Executive Committee. After working as a lecturer for a year, he became the CEO of Improtex Commerce in 1992. In 1994 he became Minister of Youth and Sport, and in 2001 he added tourism to his portfolio. His current position is that of Minister of Culture and Tourism.

Share on:
Azerbaijan hosted two major international events in 2012. How would you evaluate their success? According to feedback we received from the organizers of Eurovision 2012 and the U-17 FIFA Women’s […]

Azerbaijan hosted two major international events in 2012. How would you evaluate their success?

According to feedback we received from the organizers of Eurovision 2012 and the U-17 FIFA Women’s World Cup, the events were organized and implemented successfully and there were many positive opinions about the high standards we met. Team members, coaches, performers, and journalists from all over Europe and the world were impressed by the capability of Azerbaijan as a new destination that has the ability to facilitate and host major international events without any problems or major deficiencies. This success also helped us maintain a positive trend of tourist arrivals, as there were some worries on our side that tourist flows might decline in 2012 due to the global economic and financial crisis. Currently, Azerbaijan is still on a path to become a primary tourist destination for Europe, and these major events and many other important undertakings served to promote the country.

What needs to be done in order to change Azerbaijan’s image abroad and make it attractive for both winter and seaside tourism?

For both segments of tourism, we need to work on the development and improvement of infrastructure. For this we are developing the Shahdag skiing resort to cover the winter tourism side, with the opening of the first two hotels planned in the near future. In the same area, we plan to develop a “tourist cluster” as we build up the seaside areas in the vicinity of Shahdag. Relevant high-scale plans are being developed and regulatory issues are also being resolved. We expect to make great progress in the development of the human potential in these areas, as it is not sufficient to conduct marketing alone—the level of service, entertainment, safety, and other aspects must be covered to reach appropriate levels of sustainability. We also have to identify and elaborate regulatory mechanisms for construction and land allocation.

What initiatives is the Ministry undertaking in order to increase foreign investment in the hospitality sector?

We established fruitful cooperation with AZPROMO, the Azerbaijan Investment and Export Promotion Agency. Together, we have developed and promoted several projects at various organized events. Moreover, we engaged in active negotiations with several potential investors who are interested in the local tourism market. We consistently discuss concrete projects, help investors understand the business and legislative environments, identify opportunities, and highlight potential challenges and proposed solutions for the sector. Within the national tourism strategy covering the period of the next 10 years, we will allocate more time and effort to the establishment of relevant links with international investment communities, which will encourage them to come to Azerbaijan. As a first step, we plan to take part in several tourism investment forums during 2013, mainly to present the investment potential of the local tourism industry. Furthermore, several provisions will be stipulated in the new Tourism Law to provide additional incentives for foreign investment.

“We promote our culture at more than 20 major international tourism fairs and exhibitions annually. “

Azerbaijan has a very rich cultural heritage that is often unknown to those without connections to the country. What efforts are being made to promote Azerbaijani culture abroad?

We stage many events such as cultural days in a number of countries every year. In addition, we promote our culture at more than 20 major international tourism fairs and exhibitions annually. There is also the Azerbaijani Cultural Center, which opened in Paris in September 2012 with support from the Heydar Aliyev Foundation. Our Ministry actively promotes Azerbaijani culture in the world’s mass-media outlets, as well as by advertising Azerbaijan on CNN, euronews, and other international channels. Many international cultural events such as the International Theater Festival, the Gabala International Classical Music Festival, the Rostropovich Festival, and the Jazz Festival are being held in the country, complete with the participation of celebrities who seek to show their art and learn about local culture.

What have been the most significant changes to the tourism sector in Azerbaijan under President Ilham Aliyev’s administration?

The major changes seen in the tourism industry are thanks to Ilham Aliyev’s administration. The Ministry of Culture and Tourism in its current shape was established by presidential decree. It was President Aliyev’s administration that identified tourism as one of three non-oil sectors that have priority and must be supported by the government in line with its economic development policies. In addition to agriculture and telecommunications, tourism enjoys the status of a priority industry. As a result, two state programs were approved for the development of tourism, one of which has already been successfully completed. Since tourism is more than simply hotels and travel companies, there was invaluable support from the leadership of the country in terms of the development of relevant infrastructure such as roads and transportation networks. We also worked in partnership to attract private investment, promote Azerbaijan as a tourism destination, implement various projects, and host international events. Another example of the President’s tremendous support was that 2011 was declared the “Year of Tourism,” with many events and activities planned to support the national tourism sector.

What are the Ministry’s medium-term plans beyond the 2013 presidential election?

The tourism industry is operating in a period of rethinking, and we are currently evaluating the path we have completed, as well as the shortages and deficiencies of the organization. We are identifying our future priorities and action plans, potential, and perspectives. There are some strategic events that will take place within this medium-term period including, but not limited to, the development of a new Tourism Law, the preparation of a 10-year Tourism Strategy, a major international project toward the improvement of the technical capabilities of the Department of Tourism, and the inauguration of hotels within the Shahdag skiing resort. Furthermore, the resolution of major issues regarding tourism and recreation zones in cooperation with other state agencies and the staging of a number of key events are on the agenda.