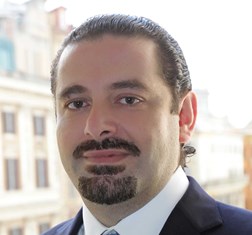 Saad Hariri, the second son of former Lebanese Prime Minister Rafic Hariri, has been the leader of the Future Movement party since 2005. He served as the Prime Minister of Lebanon from November 2009 to June 2011 and since December 2016 to the present. Prior to entering politics, Hariri was the chairman of the executive committee of Oger Telecom, chairman of Omnia Holdings, and a board member of Oger International Entreprise de Travaux Internationaux, Saudi Oger, Saudi Investment Bank, Saudi Research and Marketing Group, and Lebanese television channel Future TV.

Share on:
Lebanon's key focus is on working to improve the country in order to offer better opportunities for all.

How would you describe the commitment of the newly formed government to the country’s development?

Lebanon managed to form its Cabinet nine months after elections; however, before that, we had to wait 10 years for those very elections to take place. Thus, forming the government was not an easy task. The most important thing is that we have set a clear roadmap with all the necessary reforms to attract more foreign investments into Lebanon. We struggled for a long time with corruption, waste, electricity shortages, and other issues such as outdated laws from the 50s or 60s. The focus of this government is to set the path to modernize the country and bring long-awaited development. The CEDRE conference, supported by players such as France, the IMF, and the World Bank, has played a pivotal role in establishing a roadmap for the top priorities to tackle. For example, one of the most pressing recommendations from the IMF was to lower our budget deficit, which is one of the first actions the government will undertake. We are working with the World Bank to pass new laws to enhance transparency and fight corruption. We have already passed some nine of the 15 laws recommended after CEDRE, while the remaining will be part of the cabinet statement. Political affiliations must be left aside to carry out the necessary reforms to save the economy. All parties agree on the importance of implementing the CEDRE reforms, and all the political parties are united in their will to fight corruption. We are excited to introduce and implement all the preconditions for a healthy investment climate. One thing is clear: investors want political stability. The unity of the political powers in this cabinet provides the required stability.

What is your stance on the inclusion of women in Lebanon’s political and business landscapes?

Supporting women is not just a matter of human rights or humanitarian reasons. Women represent half of Lebanese society. Not including women in the workforce and politics is a huge loss for our GDP. For this reason, this cabinet has for the first time in Lebanon’s history four women in leading ministerial positions. The choice of Interior Minister Raya el Hassan was particularly crucial in the framework of the direction we want to give to this government. Raya is a reformist, and what we need most now is reforms. Lebanese people should get used to the idea that women can handle high positions in the government and even become prime minister, president, or the head of parliament.

Do you blame the refugee crisis for the economic and political situation in Lebanon?

Many Lebanese people might blame all the problems on migrants; however, they are lying to themselves. Before blaming others, we need to change our own system and laws that prevent us from doing trade or having the transparency that we need. The massive presence of migrants certainly constitutes a challenge. We are not in the position to solve situations of regional instability and war by ourselves; however, we can work on improving our country so we can offer better opportunities to everyone. With each challenge comes a wave of opportunities. In Lebanon during 1996 and 1997—a prosperous era in Lebanon’s history—we had over 800,000 Syrians working in Lebanon on infrastructure projects. If our economy was to work smoothly now, we could absorb the foreign workforce in a similar way today. Therefore, the focus of this government is to reform the economy and develop infrastructure projects. This will be the key to solve all other problems, including the Syrian refugee crisis. In the end, migrants will return to their countries. We cannot just sit and wait and say we have 1.5 million migrants in Lebanon and thus cannot do anything. We should change ourselves.