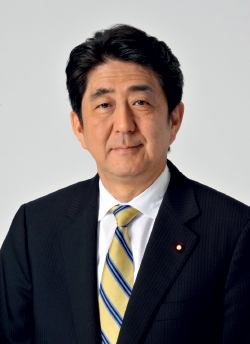 Shinzo Abe was elected Prime Minister in 2012, marking his second tenure since the 2005 election. Upon graduation from the Department of Political Science at the Seikei University Faculty of Law, he initially worked at Kobe Steel, Ltd., although his distinguished political career began in 1982 with his appointment as Executive Assistant to the Minister for Foreign Affairs. Other senior positions held have included Director of Social Affairs Division, and President of the Liberal Democratic Party (LDP), and Chief Cabinet Secretary.

Share on:
I am pleased that my government has decided to provide the region with financial assistance amounting to $2.2 billion, aimed at helping to build lasting peace and stability in the […]

I am pleased that my government has decided to provide the region with financial assistance amounting to $2.2 billion, aimed at helping to build lasting peace and stability in the region. It is in other words, substantiating our cooperation.

Now is the time for us to pool our wisdom, and aim higher and further. I am glad that my country, Japan, is part of an integral part of your dream.

For Japan and the Middle East to aim higher we have created a pilot project. Called the Corridor for Peace and Prosperity, it is a project that involves Israel, Jordan and Palestine. One single absentee among the three could ruin the entire project, as it really takes the trio to participate.

“I want to increase our exchanges at the people-to-people and academic levels with the countries of the Middle East such as Saudi Arabia, the UAE, and Turkey. “

The project is designed to transform an area of Jordan Valley into productive, fertile land and give the young people in the West Bank a promising opportunity to experience the fruits of their diligent labour. I look forward to welcoming fast-growing companies in the Middle East in joining the Corridor project to improve the healthy relationships that we share in this region.

I want to increase our exchanges at the people-to-people and academic levels with the countries of the Middle East such as Saudi Arabia, the UAE, and Turkey.

I am of the view that most government officials in Japan are unselfish, upright individuals who work hard at their jobs. Some countries in the Middle East have voiced interest in sending their public officials to Japan to learn more about the qualities of public service in Japan.

I know that people in the Middle East, regardless of their nationality or the political system they live under, all desire that their society be bribery-free and orderly. If Japan can be in a position to be of any assistance in that area, nothing else would make us more proud as Japanese.

Over the next five years, my government will invite business trainees from the Middle East and send Japanese instructors in return to the region. The two-way exchanges should amount to 20,000 people.

We also plan to increase the number of Middle Eastern students studying in Japan. Over the past seven years, the number from Saudi Arabia has expanded from 30 to 500. From the UAE around 60 students are currently in Japan, but that total, too, should be increased to 500. The number of female students among them, I am sure, will soar to something like several dozen.

Specifically, in Abu Dhabi, we are participating actively with the government to improve the bilateral relationship that we share. Responding to strong requests from the local community, we have decided to open our Japanese school for local children to be enrolled. Those young children, who are our future leaders, will be studying side-by-side. They will be laughing and smiling, engaged in joyful extra-curricular activities, like the sports and arts festivals that Japanese schools are renowned for. That, I believe, is the vision of our common future.

I promise that the government of Japan will work harder to enrich our mutual understandings between Japan and the Middle East, in this specific case with Abu Dhabi. I promise that my government will further enhance dialogue among the Japanese and Middle Eastern intellectual leaders, who will seek even better and deeper ways for us to do more together.

I started my address today with the subject of two “leaps.” One leap involves a transformation from our resource-centric relationship to the one marked by full-scale economic ties and a quest for coexistence and co-prosperity. The second leap comprises an evolution from purely economic ties to a relationship marked by cooperation in the quest for regional peace, stability, and growth.

This process will give rise to a relationship of multifaceted synergy. In other words, ties traditionally defined by energy will be supplanted by ties of fully fledged synergy.

That development in turn will foster an even stronger relationship of collaboration, coexistence, and co-prosperity between Japan and the countries of the Middle East. To assist the region in building a foundation for hope and powerful economic growth in the years ahead, Japan will pour its resources into a quest for collaboration, coexistence and co-prosperity with the region.