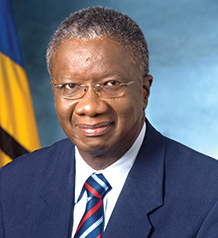 A Long Way Back

The Hon. Freundel Jerome Stuart, studied at the University of the West Indies in 1971. He graduated in 1975 with the Bachelor of Arts degree with honors in Political Science and History. In 1977, he entered the Faculty of Law of the University of the West Indies where he graduated in 1980 with the Bachelor of Laws degree with honors. Between 1980 and 1982 he read for the Master of Laws degree in Public International Law. He became a Member of Parliament for the Constituency of St. Michael South in January, 2008 and served as Deputy Prime Minister, Attorney General and Minister of Home Affairs until his appointment as Prime Minister on 23rd October, 2010.

Share on:
TBY talks to The Hon. Freundel Stuart, Prime Minister of Barbados, on economic ties, the historical ties that bind the two nations, and the potential for future cooperation.

How would you evaluate economic relations between both nations and where do you see the potential for further growth?

Panama and Barbados have enjoyed long relations. Between 1904 and 1914 alone it is estimated that about 60,000 Barbadians came to Panama, most of them destined for work on the Panama Canal, with many more having previously come to help the French with their Canal project in the 1880s. Since then, the relationship has been close. So-called “Panama money,” as it is called in Barbados, contributed much to the development of the country’s wealth in the form of remittances sent back by Barbadian guest workers. We are currently trying to deepen that relationship. In 2010, we signed a double taxation agreement to bolster Barbados’ vibrant international business and finance sector, as we see Panama as a very important partner in this. We are now trying to get our air services relationship solidified. I am meeting with the head of Copa Airlines in this regard, as there are currently no flights into Barbados from Panama. They have direct flights to many of our neighboring countries, therefore we hope to elicit some positive responses from them during this meeting and eventually establish improved connections so that Barbadians can easily travel to Panama.

The VII Summit of the Americas took place in Panama this April. What would you say is its significance in the dialog between the Americas?

This is has been dominated by the fact that it was the first Summit in many years that has involved the entire family of nations in this hemisphere, because Cuba agreed to join us too. It demonstrates the successful beginning of normalization between Cuba and the US. Barbados is very pleased about this of course, because we were one of the four nations in 1973 that took the bold step to decide that Cuba’s isolation in the area had to come to an end. This is when we established diplomatic relations with Cuba along with Trinidad and Tobago, Guyana, and Jamaica. We have continued to fight for Cuba’s integration into the hemisphere as a legitimate member of the community, so you can guess how content we have been over the course of this Summit. We think that the interactions between the leader of Cuba and the US represent a great leap forward.

Where do you see the future of relations between Barbados and Panama?

I believe that the language barrier has separated us from one another. As such language barriers are broken down, all of the countries in Latin America and the Caribbean will come together. We are all working toward that, and Barbados is not going to be left out. We are seeing a deepening in the relationship between Barbados and Panama on a cultural level. Recently, I heard from Barbadians living here about how ingrained Barbadian habits and mores are in certain parts of Panama, including culinary habits. They are all present here, meaning there is hope for expanded cultural exchanges and for citizens of the two countries to get to know one another better. There is hope for a deepening of our economic relationship through tourism and international business and financial services. In addition, on a political level, we have a strong diplomatic relationship, and I believe that it is only a matter of time until Barbados establishes an Embassy in Panama and vice versa.