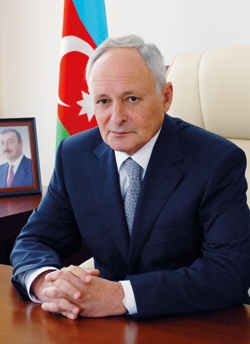 Dr. Ogtay Shiraliyev began his medical career as a junior researcher at the Roentgenology, Radiology, and Oncology Research Institute and was appointed Chief of the Republican Endoscopic Centre in 1982. From 1983 to 1988, he was Chief at the Ministry of Health’s Scientific Department. He was then appointed Director of the Republican Diagnostic Center, a position he kept for 17 years. In addition to leading the Ministry of Health, Dr. Shiraliyev is a professor of medicine and continues to supervise doctoral candidates and produce academic research.

Share on:
What have been some of the major developments of the Ministry in recent years? One of the most graphic examples of the President’s social policies is the development of health […]

What have been some of the major developments of the Ministry in recent years?

One of the most graphic examples of the President’s social policies is the development of health care. A number of highly important legislative acts, state programs, and other regulatory documents have been passed under the direct leadership of the President. Major reforms have been implemented in recent years to improve healthcare management, strengthen the material and technical logistics of medical institutions, introduce cutting-edge technology, and dramatically change personnel policies. This, in turn, has enabled Azerbaijan’s healthcare system to develop in accordance with international standards, embarking on a path of consistent integration into the healthcare systems of the world’s leading countries, and to significantly improve the reputation of Azerbaijani healthcare internationally. The dynamic development over recent years also continued in 2012, which was reflected in the improvement of demographic and health indicators. A comparative analysis of the last 10 years shows that the birth rate has increased from 13.9 to 17.4 per 1,000 people, while the mortality rate has dropped from 6.0 to 5.3. The natural increase of the population has risen from 7.9 to 12.1, which is the highest indicator in Europe. Budget allocations to health care have increased by more than 11 times in comparison with 2003, to constitute AZN660 million in 2013. The allocations from the state budget and the public investment fund have enabled the Ministry to establish medical centers that use state-of-the-art technology and are fitted with cutting-edge medical equipment. About 500 medical facilities have been built or renovated over the last decade. Of these, about 70% are located in the countryside. These include the National Cancer Center, the National Ophthalmology Center named after academic Zarifa Aliyeva, the Scientific Surgery Center named after A. Topchubashov, the National Perinatal Center, the National Urological Hospital named after M. Javadzadeh, the Azerbaijan Medical University clinics, the Clinical Medical Center, the National Clinical Hospital for Children, the Children’s Neurological Hospital, and many other major health facilities. In 2012 alone, a total of 76 medical institutions were built or renovated. Of these, 40 were located in Baku and 36 in regional areas. Renovation and overhaul has been carried out at 24 medical institutions (13 in Baku and 11 in the regions), and they have been put into operation. Since 2005, a total of 11 state programs targeting priority healthcare sectors have been adopted, and their implementation is successfully underway. A total of AZN387.7 million has been spent on the execution of healthcare programs over the past 10 years.

What progress has been made by the Ministry with regard to treating people with hereditary diseases?

As a result of the measures taken by state programs, the level of medical service provided to mothers and children, patients suffering from oncologic disorders, endocrinological issues, hereditary blood diseases, kidney insufficiency, and so forth has dramatically improved. The diagnosing quality of these diseases has also substantially increased, and the supply of medicine has improved. As a result, performance indicators regarding this type of service have significantly increased. For the first time in Azerbaijan, as part of a diabetes program, diabetic patients have been provided with self-control resources including glucose meters and strips. Moreover, the perennial problem with the provision of diabetic patients with medicines has now been resolved. As a result of these measures, the level of diabetes identification has increased, while the number of registered diabetic patients has risen by 3.6 times since 2003 to reach 180,000 people. In addition, the morbidity rate among diabetic patients has dropped from 21.7 to 7.5 per 100,000 people.

What developments have come to light with regard to treating cancer patients in Azerbaijan?

The adoption of the “State Program on the Provision of Oncologic Patients with Medicines for Malignant Tumors” has led to significant progress in fighting cancer. The material and technical logistics and infrastructure of hospitals providing cancer treatment has substantially improved. The National Oncology Center has been provided with the latest medical equipment, including a mobile diagnostic unit. President Aliyev attended the groundbreaking ceremony for a new building of this center personally. It has now been built and put into operation. As a result of these measures, the identification of cancer patients has dramatically improved and the morbidity rate among cancer patients has dropped from 62.1 to 59 per 100,000 people.

“About 500 medical facilities have been built or renovated over the last decade.”

What measures have been taken to improve the quality of medical services offered in Azerbaijan’s maternal wards?

A priority of the government’s social policy is to improve the quality of medical services provided to mothers and children. As a result of the direct involvement of the country’s leadership, major strides have been made in this area in recent years as well. The adoption of the state program on the protection of the mother and child, the introduction of electronic health cards, and immunological prophylaxis of infectious diseases has contributed a great deal to the protection of maternal and child health. To demonstrate our special focus and attention in this area, the Ministry established a total of seven perinatal centers in the republic, including in the city of Baku and the Nakhchivan Autonomous Republic, as well as reconstructing and completing a major overhaul of the National Children’s Hospital and the second and third Baku clinical hospitals for children, the Children’s Neurological Hospital, the Children’s Cancer and Cardio Surgery Centers, and many other facilities providing medical services for children. All of the children’s outpatient clinics in Baku have been fully renovated and fitted with state-of-the-art medical equipment in recent years. As a result of these activities, indicators describing maternal and child health in the country have dramatically improved. Whereas in 2003 the rate of infant mortality was 16.7, in 2012 it dropped to 10.8 per 1,000 people. The rate of maternal mortality dropped from 18.5 in 2003 to 14.9 in 2012.

What is the Ministry doing in order to prevent the spread of infectious diseases in the country?