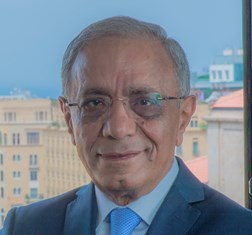 Nabil A. Itani is Chairman & General Manager of IDAL, Lebanon’s national investment promotion agency. His career spans decades of professional achievements and significant contributions to the business environment. His professional experience is wide-ranging and far-reaching, encompassing an architectural career, as well as prestigious affiliations, academic posts, publications, and conference presentations. Supporting and backing the start-up and SME ecosystem as a pillar of the knowledge economy, Itani also strives to spread the clustering concept among various Lebanese regions.

IDAL is an investment promotion and development agency with several mandates. We encourage direct investments in Lebanon in targeted productive sectors such as industry, tourism, agriculture, agro-industry, technology, IT, telecommunication, and media. Unemployment is currently Lebanon’s main issue; we want to put a stop to the “brain drain” and provide opportunities to young graduates. We also promote Lebanese exports especially agricultural and industrial products. Agriculture is particularly neglected by development efforts in Lebanon due to the limited size of arable land. We developed a program called “Agri Plus” to encourage exports of products with added value and high return. Since Lebanon cannot compete with mass production, our best bet is to support high-quality production. IDAL provides incentives to the exporters based on the quality of packaging, levels of presentation, and their destination market, so that they can add value to the agriculture produce and create side jobs. We also facilitate access to the international market for some products to boost demand for products on the one hand and guide exporters in the right direction on the other.

One of IDAL’s roles is to assist the government in policy recommendations that can stimulate investments. This is part of a three-pillar strategy, which includes infrastructure projects through PPPs and investments in new promising sectors (as recommended by the McKinsey report). Our set of recommendations are incorporated also in the UNCTAD’s Investment Policy Review of Lebanon, which will later be implemented across all ministries. We started working on enhancing the investment climate in Lebanon, through various reform initiatives. The current priority areas of intervention are the amendments to the decrees of Investment Law No. 360, which will ensure more flexibility and capability to support SMEs. Another priority is the transition to an e-government platform, which is now going to take place in several ministries.

What role can the Lebanese diaspora play in terms of investing in Lebanon?

We are in direct contact with the diaspora to encourage diaspora direct investment and to strengthen economic linkages with Lebanon depending on their position in their adopted countries and sectors of interest. For example, if a Lebanese entrepreneur abroad resorts to a sub-contractor in Lebanon for a service required by his or her production activity in the host-country, this will have a positive impact on the local export sector. Given the size of the diaspora, its involvement could represent a win card for Lebanon. Since many entrepreneurs hesitate to directly invest in Lebanon due to regional insecurity, we launched a program called “one product, one cluster.” Through this program, the diaspora can develop a cluster of one product that is owned by a Lebanese entrepreneur and supported by the diaspora in a win-win situation. This is not a direct investment, but a way to share investment with the local community. At present, IDAL is establishing a cluster for dairy products.

From the perspective of a foreign investor, why Lebanon?

Lebanon has a great geographic location in between three continents. It boasts an open market economy—one of the oldest in the region—which is entrepreneur-friendly. Our main treasure is our human talent. Another pillar of our offer is the easy access to finance within Lebanon, with deposits of around four times our GDP that grant the country financial stability. We also have several programs that support the production sector. There is also a legal infrastructure that is grounded to help secure ownership and investment within Lebanon. We are now in a process of enhancing our transport infrastructure; once completed, it will transform Lebanon into a hub for production and exports.