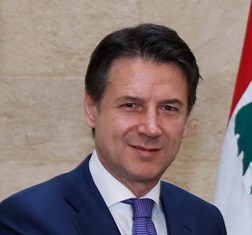 Giuseppe Conte is an Italian jurist and politician, serving as the 58th and current Prime Minister of Italy since June 1, 2018. He started his academic career as professor of private law during the 1990s. Conte is currently professor at the University of Florence and at LUISS of Rome. In 2018 Conte was selected as the head of a coalition government between the Five Star Movement and the League, also known as the Government of Change. Conte’s government has professed a strong involvement in reforming the tax system, reducing corruption, and fighting illegal immigration. Conte holds a degree in law from the Sapienza University of Rome and carried out further postgraduate studies at Yale Law School and the International Culture Institute in Vienna.

Share on:
With Italian enterprises making large investments in a range of sectors in the economy, Lebanon and Italy are expected to continue pursuing mutually advantageous relations.

How would you define the ties between Italy and Lebanon?

First, I would like to extend my warmest wishes to the recently formed Cabinet, which in many ways resembles Italy’s own current governmental contract. Our two countries are linked by a profound and ancient friendship, based on mutual respect and a common Mediterranean identity. We both share a strong interest for peace and stability in the region. Italy stands side by side with the Lebanese population to offer its own contribution to the process of peace, dialogue, and social cohesion in the country. We are proud of the role played by Italian forces in the framework of UN-led missions, in particular of the UNFIL mission that Italy is directly coordinating. I have already had the chance to offer my gratitude to the efforts of the Italian contingent under the guide of General Del Colle. At the moment, Lebanon finds itself facing a set of important challenges. However, I have seen Prime Minister Saad Hariri determined to implement the economic and social reforms that the country needs to sustain its positive record of development and distance itself from regional instability.

Which are the main channels for bilateral cooperation between Italy and Lebanon?

During a meeting with Prime Minister Hariri in 2019, I had the chance to discuss a number of topics for bilateral cooperation in-depth. First, with regards to the Blue Line, we want to encourage all involved parties to engage in constructive dialogue, which we see as the only solution to solve international tensions. I confirm Italy’s availability to act as a mediator. We have also examined opportunities for bilateral partnerships and trade. In recent years, Italian enterprises have made huge investments in a range of sectors in the Lebanese economy, including oil and gas, wastewater management and electricity. The Lebanese government has committed to fulfill demands by the international community so that the inflow of loans and grants agreed upon during the CEDRE conference can be facilitated. I warmly reiterate PM Hariri’s invitation to welcome the participation of Italian companies and businesses in this investment plan and build partnerships with the Lebanese private sector. We are pleased to contribute to the growth of Lebanon’s economy through the competences and technological capabilities of Italian businesses. We have established a series of plans and technical committees to assess the impact of Italian investments and evaluate the possibilities of involvement of Italian companies. We have also discussed the main regional crises and agreed on ways to promote mediation, always under guidance of the UN. It is crucial to proceed in a way that avoids exacerbating the weight of sanctions on the regions’ economies. Finally, we discussed the impact of the presence of refugees on Lebanon’s economy. Lebanon currently hosts the highest percentage of refugees in the world, equal to around 30% of its population. Italy has continually shown solidarity to Lebanon through a number of humanitarian initiatives and development projects. Once again, I intend to reaffirm Italy’s commitment to support the Lebanese government through an approach that is strictly inclusive and never invasive, respecting the sovereignty and policy guidelines determined by the Lebanese government.