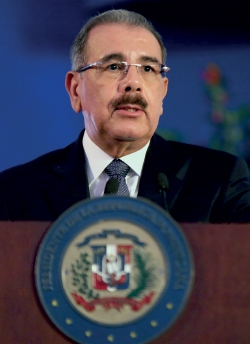 A graduate of Economics from the Santo Domingo Institute of Technology (INTEC), Danilo Medina revealed an early interest in politics, establishing the San Juan de la Maguana branch of the Frente Revolucionario Estudiantil Nacionalista at the Autonomous University of Santo Domingo (UASD). He has been a member of the Dominican Liberation Party (PLD) since its inauguration in 1973. Having sat on the Central Committee since 1983 he entered Congress as a deputy in 1986. Danilo Medina has held the presidency of the Dominican Republic since the August 16, 2012 presidential elections, in which he garnered 51% of the vote.

Share on:
Danilo Medina, President of the Dominican Republic on taking full advantage of national and regional potential.

We are also one of the six countries in the world that have, at one time, preferential and free trade agreements (FTAs) with the US, through the CAFTA-DR, and the EU, through the EPA agreement. These and other agreements allow us to have preferential access to 876 million consumers worldwide, offering tremendous advantages for companies established in our territory.

Some of our products are also number one in world rankings. We are, for example, the main exporter of cigars to the US, of rum to Spain and Chile, and the second largest exporter of cocoa in Latin America and the Caribbean. We are the third largest exporter of optical and medical equipment. We also have one of the top-five operating gold mines in the world.

All of these figures showcase the dynamism and robust health of our economy, confirming investor confidence in our ability, and the wide range of possibilities that we can offer. To take full advantage of this potential, we are promoting key strategic sectors of our economy, looking to expand its capabilities and successfully adapt to a constantly changing economic environment.

In the tourism arena, we are a favorite destination in the region. Now we have the challenge of diversifying our offer, creating tax incentives to attract investment both to consolidate the traditional destinations and to open new ones, capitalizing on the natural wealth of our country and the appeal of our culture. In the same manner, we strive to promote cruise tourism and eco-tourism.

In terms of infrastructure, we are uniting all parts of the country with a modern road network, some of them as iconic as the Ring Road of Greater Santo Domingo.

Agriculture is another of our strengths that is experiencing reviving profitability. We are investing significantly in the form of credit insurance for agricultural production, which I often supervise myself on the ground.

Meanwhile, free trade zones (FTZs) deserve our attention, given the importance of foreign investment for job creation, technology transfer, and foreign exchange. To give you an idea of how important the FTZs are for the country, in 2012 they became the main source of foreign exchange, even exceeding tourism, generating in excess of over $5 billion. The incentives we provided in the first year of the government resulted in the creation of 64 new companies, 12 industrial parks, and 16 extensions, which have created over 44,000 new jobs.

Another sector that offers significant opportunities in the Dominican Republic is energy. The country has notable demand that remains unsatisfied, and we have decided to open the sector up to international investment. We will initially hold a tender for two coal-fired plants. However, the goal is to have an increasingly diversified energy mix, which over the coming years can absorb the growing demand of an expanding economy. We are opening doors to new projects and initiatives that will help us establish the modern, competitive, and efficient power sector that is required.

Equally important for this government has been the reduction of bureaucracy encountered by investors. We have launched a one-stop investment service, which has drastically reduced the time needed to obtain permits and other paperwork. This service is directed to strategic sectors such as tourism and public works, and will shortly expand its scope to the remainder of the economy.

It is true that tax incentives and infrastructure are important for competitiveness; however, often the best step a government can take to attract investment is to establish a climate of stability and predictable institutions to convert the country into a safe and supportive ecosystem for enterprise development. We are working tirelessly to ensure this sustainability. Since the beginning of our administration, we have treated with utmost seriousness the rationalization of public spending, which was consecrated by decree, and have cut wasteful spending and redirected billions of dollars into productive sectors. In the same manner we have centralized government accounts into a single treasury account, limiting duplication and eliminating redundancies existing in public employee payrolls.

We also know that a diversified and competitive economy requires both skilled labor and a solid middle class with purchasing power. That’s why we are investing in our people as never before through social support programs, but also in the most sustainable manner possible: by creating jobs. By promoting microcredits, giving advice and financial support, and through the provision of insurance to SMEs, we are helping to create thousands of jobs, and fostering a mentality among the population conducive to entrepreneurship and the pursuit of business opportunities.

Since we spend 4% of GDP on education we are undergoing a real revolution in this vital sphere. This revolution encompasses the entire training cycle, from primary education right through to university and adult education.

As for the rise in the Dominican Republic’s middle-class, we are also experiencing a happy moment of progress, as are other Latin American countries. In many parts of the continent the central role that public policy can play in this process is being explored. Maintaining sober macroeconomic policies, while investing in social programs, our countries are year after year elevating millions of people to the middle class. To mention just a few steps in the area of health, we are ensuring that public health has universal reach, with the elimination of quotas in hospitals and, in parallel, are in the process of including 100% of the population into a social security system.

In short, our country is in a process of expanding its human and economic potential. We are reinforcing our traditional strengths, while opening up new areas for development. We are investing in our people as never before and taking the first steps toward the creation of a middle-class society. We are committed to both our citizens and national and international investors, offering a favorable climate for business creation, with a growing economy and a transparent and professional public administration.

I believe that the only way for our country to move toward development is through a strong partnership between business and government, and the Dominican Republic is committed to fostering a positive commercial climate.

On June 27, 2013, the Dominican Republic officially became fully incorporated into the Central American Integration System. Two days later we joined, with enthusiasm, the new Petrocaribe Economic Zone, which should help to boost our exchange and cooperation mechanisms.

The Caribbean Community (CARICOM) is, and should increasingly be sharing our natural environment in a spirit of cooperation and integration. It is our immediate environment and, as such, we will prioritize it, not only because of our geographic proximity, but also because of the historic ties among our people.

We also believe that tourism, a key element of our economies, should be an axis of integration between our nations. At the last Petrocaribe summit, where the agency stepped forward to become an area of economic exchange, the Dominican Republic assumed the presidency of its Tourism Commission. In the same manner, we offer on this platform of cooperation our experience in the field, and are committed to the development of the sector, and the promotion of knowledge sharing with our neighbors.

We are called to create an open and supportive economic space as a means of energizing the Caribbean integration movement, which will allow our main instrument, CARICOM, to become a flexible entity that can respond to both economic opportunities and our need for further political integration.

Our region has huge potential for growth and for bringing happiness and progress to the millions of men and women who share the beautiful Caribbean Sea. The Dominican Republic believes in and works toward that dream. And in this spirit, we aim to be part of a continent of peace and justice, capable of growing in equality and solidarity.