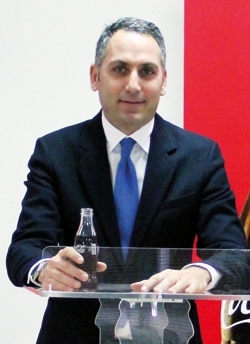 Share on:
What were the strategic decisions that led Coca-Cola to enter the Azerbaijani market? Coca-Cola entered Azerbaijan in 1994, right after the separation of Azerbaijan from the former Soviet Union, as […]

What were the strategic decisions that led Coca-Cola to enter the Azerbaijani market?

Coca-Cola entered Azerbaijan in 1994, right after the separation of Azerbaijan from the former Soviet Union, as a sales and distribution company. We started production in Baku two years later in 1996. Coca-Cola is one of the first and largest foreign investments in the non-oil sector. Azerbaijan is a dynamic, young, developing, and prosperous country and—as in rest of the world—Coca-Cola is part of everyday life, and Azerbaijan is no exception.

How would you characterize the FMCG sector within the country?

The FMCG sector here in Azerbaijan is developing every day and becoming more competitive and advanced, which is not very different from the FMCG sector in other countries.

Azerbaijani consumers demand the best products and the best services available at the highest standards. There are many companies operating in this sector, meaning we need to be able to meet the high standards set by our consumers. The companies that are the fastest not the biggest will win in this marketplace.

How would you describe Coca-Cola’s competitive advantage in relation to other drink manufacturers here in Azerbaijan?

As Coca-Cola Azerbaijan, offering the best quality products is our top business objective, and our production quality adheres to the highest world standards.

In 2012, I was very honored to represent my company, and I felt extremely proud that Azerbaijan Coca-Cola was recognized as one of the leaders in quality in the Coca-Cola system. Coca-Cola Azerbaijan was nominated for the President’s Sustainability Awards Grand Prize (Best Country Bottling Operation) organized by The Coca-Cola Company Eurasia and Africa Group.

Azerbaijan Coca-Cola was selected as one of the top-10 nationwide performing plants from among 260 plants in 90 countries by an international jury that assesses the performance of bottling operations in the fields of environmental and quality performance, as well as overall contributions made to local communities.

What is the current market share of Coca-Cola beverages in Azerbaijan?

We track our market share on a monthly basis from a third-party independent agency and our current market share is around 60%. We have products in five beverage segments in the total Non-Alcoholic Ready to Drink (NARTD) segment, and we are either number one or number two in all the segments we have products.

How important are your Azerbaijani operations as a proportion of your regional operations?

The Azerbaijan Coca-Cola Bottling operation is part of a regional bottler, Coca-Cola İçecek, which is based in Istanbul. It operates in 10 countries, which makes it the sixth largest bottler in the Coca-Cola System. Azerbaijan is the fourth largest operation in Coca-Cola İçecek’s portfolio, and it is one of the most important markets both from an innovation and execution in market standpoint.

Azerbaijan is a leader, right after Turkey, in introducing new investments, technologies, and applications within Coca-Cola İçecek. Azerbaijan was the first country in the Caucasus and Central Asian Region (CCAR) to introduce Coca-Cola Zero. Also, Dushes is a local Azerbaijan pear type, which we developed into a Fanta Dushes flavor that is unique to Azerbaijan.

How would you assess the current investment climate within Azerbaijan?

The Azerbaijani government is promoting new investments in the country by passing new laws and legislation to help increase FDI. Furthermore, these revisions and updates are introduced by the Parliament to help existing businesses in Azerbaijan be an integral part of the world economy in order to be able compete in a free market economy. Not only the Azerbaijan private sector, but government agencies and organizations are becoming an integral part of their counterparts around the world.

What have been some of the major changes you have seen over the past decade?

Azerbaijan is developing very rapidly, and it is doing it in an organized and systematic way. The development is happening in all regions of Azerbaijan, as well as in the public and private sectors, law and legislation, infrastructure, economy, and government spending abroad.

In 2012 alone, Azerbaijan very successfully organized large international events, such as the Eurovision Song Contest and the Women’s U-17 Football Championship. This is a clear indication that there is well-deserved worldwide respect for Azerbaijan.

In 2011, we set a 10-year long-term goal that we call Vision 2020. In 2014, Azerbaijan Coca-Cola will celebrate its 20th year in Azerbaijan. So far we have invested around $120 million. Over the last three years we have spent more than $40 million, and we have plans to operate and invest in Azerbaijan for many years to come.