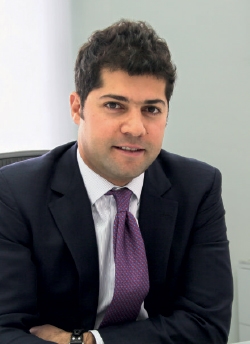 After gaining experience in channel and product management, Eddy Cherfan took the management reins of Cherfane, Tawil & Co. (CTC), Samsung Electronics’ distributor in Lebanon, in 2006, at the age of 25, and was appointed CEO. Eddy’s daily involvement in all of AC Holding’s operations (as the parent company of CTC) kept him close to his products and markets, and allowed him to anticipate future key expansion areas into renewable energies and energy efficiency, which are at the heart of the group’s development strategies.

Share on:
How did AC Holding become a key part of Samsung’s entry into the Lebanese market? When CTC was founded in 1979, we used to act as an appliance business and […]

How did AC Holding become a key part of Samsung’s entry into the Lebanese market?

When CTC was founded in 1979, we used to act as an appliance business and agent for some European brands. A few years later, we acquired the Samsung distribution rights at a time when Samsung was an unknown brand, and founded Samsung Cherfane Tawil & Co. (Samsung CTC). From there, we have evolved throughout the years.

How have your product and service lines evolved?

After washing machines, Samsung started with microwaves and color televisions. From there, it started expanding into air conditioning units, and then automatic washers and refrigerators. By 2000, we had begun to diversify a little into real estate, and we also had the distribution rights for a few other small brands. From 2002 onward, we focused on diversification and, in the past 10 years, we have evolved drastically. We are now a highly diversified, international group with operations in Lebanon, Syria, Jordan, the UAE, and Ghana.

How have your distribution networks expanded geographically?

The consumer electronics business in Lebanon has changed drastically. Previously, it was focused on small players scattered throughout the country, rather than on a few big players with a large chunk of the market. The real maturity in the distribution network happened in the early 2000s. At the time, we had one sales manager handling the majority of consumer electronics products, whereas today we operate under specialized business units.

How did you diversify into real estate?

It happened by chance. Some of our clients had financial issues, so they offered us some real estate instead of closing on their dues. We formed a company in 1988, called Hadath Real Estate, and managed to grow from there.

What were the main reasons behind the development of your training and consultancy wing?

The move into training and consultancy under PROSEED was one of our recent expansions, and was aimed at better coordinating the synergies between our different companies, as well as offering these services to other holding companies.

What are your diversification plans on the energy efficiency front?

We are focusing a lot on renewable energy. We have a sister company called Solec that focuses on that segment, so we have a lot of projects going on and we are working with governments and NGOs. We are working with wind energy, solar energy, and even energy saving through LED lighting.

To what extent do you see this market developing in the coming years?

In a country like Lebanon, it should develop. We have a serious electricity problem, plus we are a country that gets close to 300 days of sun every year. Although we lost the Beirut River Solar Snake project tender, there are many other projects coming up. Some of our regions like Akkar have good zoning for wind energy. Plus, with the help of the EU and some NGOs, we are seeing a big push by the government and are supported by the banking sector to progress with renewable energy projects. Solec does not only handle government, tender, or corporate business, it also handles the consumer side of the renewables business.

What other innovative projects are you developing?

We are also present in the mobile applications market. We have a sister company called CodeFish App, which is developing and pushing apps. We developed an app for ANB Mazda, and the company is now looking to replicate it for its various distributors around the world. We are also in the TV app business, and have developed local TV apps for MTV, Flair, Beiruting, and more.

How do you plan to expand your product lines and operations over the next year?

We want to diversify our businesses further, and already own several outdoor LED networks. We do kitchen fittings, mostly from Italy with a company called Cesar, which is also under AC Holding. With Samsung, we are focusing on the solutions business and other products, particularly B2B. We want to provide security solutions through Samsung, while also continuing to develop renewable energy with Samsung SDI.