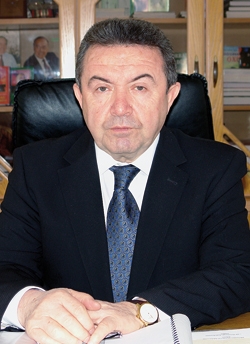 Minister of Education, the Republic of Azerbaijan

From 1971 to 1989 Misir Mardanov worked as a teacher and Associate Professor of Mechanics and Mathematics Faculty of Azerbaijan State University. He was then appointed Director of the Department of Higher Education of the Ministry of National Education of the Azerbaijan Republic, Deputy Minister of Education in 1989. Mr. Mardanov was the Vice-Rector of Baku State University for academic affairs before becoming Rector in 1998. He was appointed Minister of Education in 1998.

Share on:
What have been some of the major developments within the Ministry over 2012? In recent years, a number of major changes have been implemented in the education system of Azerbaijan. […]

What have been some of the major developments within the Ministry over 2012?

In recent years, a number of major changes have been implemented in the education system of Azerbaijan. One of the major developments we had was the improvement of the infrastructure of the education system, including the construction of new buildings for schools and higher education institutions. For example, over the last decade 2,400 new school buildings have been constructed or repaired. This amounts to more than 50% of the schools functioning in Azerbaijan. All of these schools were equipped with the necessary, modern equipment in order to ensure efficient learning and teaching. One of the important issues is that starting from 2012, forcedly displaced people who were accommodated in the hostels of the universities are being gradually moved to new buildings constructed specifically for them in different areas of Baku city. This is not only for university hostels, but also for kindergarten, school, and college buildings. Another important point is that over the last few years, the construction of the legislative basis of education has continued. It is very important because our education system previously functioned as an integral part of the Soviet education system, but now our education system is developing on the basis of national legislation. Starting in 2008, we have completely changed the content of secondary education and started the introduction of a national curriculum. Five years ago, we started the introduction of a new curriculum in the first grade of general schools, and now the new curriculum is used in grades one to five. You might ask, what is this innovation about, what is the difference between the previous curriculum and the new one? The main difference in the curriculum that we had and what we have now is that the previous curriculum was only based on the memory of the students. They only had to memorize what they were taught, but now the new curriculum stimulates the development of the logic capabilities of the child, and their critical thinking and life skills. It is easy to say it in a sentence, but it is very difficult to implement. We started publishing new textbooks based on this curriculum and distributed them free of charge to schools. At the same time, based on the new curriculum, we organized training courses for teachers at schools and universities. We also initiated a new evaluation system.

Another major development is the introduction of ICT into the education system. When we started this process, we had only one computer for every 1,044 children in our secondary schools, but now this indicator is one computer for every 20 children. At the same time, we also conduct special training courses for teachers on computer skills. These courses are conducted at schools, and more than 50% of teachers have already attended these courses. Another vital issue that I’d like to point out is the management of the education system. Previously, we had a centralized system where education was managed by one center. Now, the system is more decentralized and the education institutions are governed not from the center, but by the local communities and authorities. At the same time, we managed to improve the independence of the universities. This also means that we attract parents into the management of educational institutions. In Azerbaijan, parent-school associations have been established, and through the activities of these associations parents are broadly involved in the process of management. Out of the 4,500 schools that we have in the country, more than 2,000 became members of this association, and this number is growing.

What changes are occurring to the way that education in the country is being financed?

Over the past few years, there have been some serious changes to way the education system is financed. For example, we are now transferring to a per-capita financing system, and we are continuing our joint project with the World Bank aimed at the introduction of this system in our secondary schools. The majority of higher education institutions are independent and financed directly by the government. It is very important to provide teachers and managers with the opportunity and necessary conditions for continuous education. A specialized curriculum for teachers has been developed for continuous education, and it is implemented on the basis of this curriculum. The attention to the development of education from the President of Azerbaijan is increasing every year, and the funds allocated to education are also rising as well. Teacher salaries are likewise increasing, and their social protection is improving. The role of the Heydar Aliyev Foundation in the construction of school buildings for disabled children and the development of inclusive education should be emphasized. Over 10,000 Azerbaijani youth are now receiving their education abroad. Out of this amount, about 2,000 students are financed within the framework of the “State Program on Study for Azerbaijani Youth Abroad for 2007-2015.” We are planning to increase this number to 5,000 by 2015. The state also finances a further 2,000 young people on the basis of an exchange program between universities. There are also more students studying abroad on a self-support basis. At the same time, the number of foreign students studying in Azerbaijan’s higher education institutions is increasing. At present, about 7,000 foreign students receive their education in our universities.

“Our education system is developing on the basis of national legislation.”

How would you evaluate the importance of ICT solutions in education?

It is very important, and it is an issue that President Ilham Aliyev has particularly focused on. Recently, the President adopted “Azerbaijan 2020: The Vision of the Future,” a development concept. The introduction of ICT has been given a very important role in this concept. Within the framework of introducing ICT in education, we closely cooperate with world-famous companies such as Microsoft, Intel, and Cisco. We implemented a new project aimed at the provision of a computer for each student. E-school is another project that we are developing. This project is very much welcomed by both students and teachers. From one side, we are broadening the opportunities for teachers and students to receive up-to-date information, and at the same time they have an opportunity to get acquainted with modern teaching methodologies.