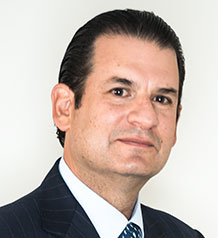 Luis Carlos Sarmiento Gutiérrez has acted as President of Grupo Aval since 2000. He acted as President of Cocelco S.A. from 1997 until 2000, and has served as Executive Vice President at First Bank of the Americas in New York and as an analyst and financial manager at Procter & Gamble’s corporate headquarters. He has been the Chairman of the board of directors of Banco de Bogotá since 2004 and of Corficolombiana since 2006. He holds a BS, magna cum laude, in civil engineering from the University of Miami and a MA in Business Administration with a concentration on finance from the Johnson Graduate School of Management at Cornell University.

Share on:
"One thing is clear: oil is gone, and we have to take care of the of the country's finances, peace deal or not."

How does Grupo Aval’s rebranding relate to its future strategies?

We are often seen as a solid and dependable financial group, but not necessarily as young or innovative. Thus, in the past four or five years, we decided to reach out to millennials—mostly through entertainment, but also through innovative products such as electronic wallets or smart-phone pay products. We were the first to offer a virtual wallet that accepts all the credit cards in the market, and also wristbands that give you access to and with which you can pay in concession stands during concerts, obviating the need to carry cash. We decided to rebrand our logo to one that conveys a lighter, younger, and more innovative image to complement these developments. We are also very interested in mobile banking because we firmly believe that this is the direction in which the financial world is moving. We want to be a part of that and to be the leaders in innovation in Colombia. So far, it seems to be working.

As was the case immediately after Brexit, we are seeing some uncertainty in the markets. If you saw what happened with the dollar-peso exchange rate and the stock exchange, sure there were some negative reactions, but to be honest with you, in the long term I am not particularly concerned. As opposed to Brexit, I am confident that people will soon realize that the end result of what happened in the referendum is that Colombia will end up negotiating a better deal supported by the vast majority of its population. And this deal will be better for investor confidence and for the country in the long run. If the referendum had passed by a similar margin—barely 60,000 votes—the government would have had real trouble in smoothly implementing the negotiated treaty because it would have been constantly reminded that only 50% of the voters supported the negotiation. I am also convinced that if we can get the political forces behind the Yes and No camps to act in unison, we will have a good chance of achieving much-needed structural fiscal reforms.

What key issues are you looking to be dealt with in the fiscal reforms?

After what was frankly a somewhat hostile tax reform in 2014, we are looking for a more business-friendly and integral fiscal reform this time around. It will need to reduce taxes on businesses and expand the tax-payer base. It might also end up taxing dividends—even though at the end of the day, a tax on dividends is also tax on corporations since dividends originate from corporate income. So we expect that once dividends are taxed, in addition to the new tax on corporations, the combined rate will be less than what it is today and obviously less than what the tax on corporations is slated to be in two years when it is scheduled to rise to around 48%. We also expect that the VAT will have to go up; there is no other way to increase fiscal revenues. One potential problem with convincing congress of the need to raise VAT is that the government has insisted that the reason behind the increase is to finance “post-conflict“ costs. Since the plebiscite was defeated it is going to be tough for the government to sell a new theory. However, the reality of it is that at the end of the day there is a deficit that needs to be plugged and that’s just the iron rule of deficits. Also, the government needs additional fiscal revenues because it has promised that by 2018 or 2019, it will fall into compliance with the existing fiscal rule, and to do so they have to start contracting the deficit soon. Obviously, one of the reasons the deficit has grown is because of the demise of the oil industry which used to contribute with 20% of all fiscal revenues and has recently dwindled to almost nothing. I see no other way of fixing the deficit than by congress passing an integral fiscal reform that includes an increase in VAT. Reforms and particularly tax reforms are always tough, so the government needs to be very transparent. If we are to fix the country’s finances, the government must make clear that we need everybody to contribute to the extent that they can. But if the entire burden is placed on the backs of businesses, as happened as a consequence of the 2014 fiscal reform, this will have a hugely negative impact on the business environment, not to mention scare away foreign businesses willing to invest in Colombia. However, this is a smart government, and I have to believe that the Minister of Finance is not going to make the same mistake again. The reality is that we need to make the government’s two biggest initiatives independent of one another: fiscal reform, on one hand, and the peace process, on the other. Though we have mixed the two in the past, we cannot continue to do so. One thing is clear: oil is gone, and we have to take care of the of the country´s finances, peace deal or not.

What are your goals or targets in 2017 for Grupo Aval?

We are targeting consolidated growth of around 13%. We also expect better performances in Central America than Colombia because the economies there are different. In Colombia, we export oil and in Central America we import it, so low-cost oil is good for the latter. The other thing is that whenever the US economy rebounds this will have a major effect on Central America as the people there heavily rely on remittances from the US. In general acros all our markets we foresee better performances in the coming year than in 2016, with some growth and improved quality control of our assets and costs of risk. There are also additional opportunities in Colombia from the infrastructure sector with the 4G Infrastructure Plan, which has already become a reality. Our banks have already offered about USD2.5 billion in financing, which will start being disbursed next year. This is going to be a big contributor to Aval’s growth because we participate as a group not only on the financing side of infrastructure but also on the equity side as constructors and concessionaires. The latter should give us good returns on our merchant bank, Corficolombiana. We will also keep implementing our strategy to get closer to a younger audience and to keep evolving in tune with how they want to do their banking. We are exploring various new sales channels to reach people through electronics and the internet. In a nutshell, we adapt our strategy to the times, relying just as heavily on the ethical, financial, marketing, and strategic premises that have brought us this far.