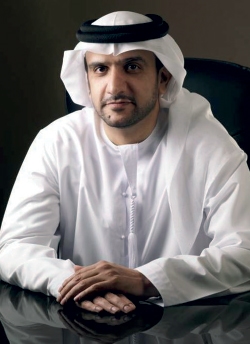 A Balance to Maintain

HE Mohammed Sultan Al Hameli holds a number of high-level positions in Abu Dhabi; he is the Chairman to Health Authority-Abu Dhabi, Vice-Chairman of Abu Dhabi Commercial Bank, Board Member of Abu Dhabi Health Services Company (SEHA), and Abu Dhabi General Services “Musanada.“ He holds a Bachelor’s degree in Finance from Boston University and is CFA certified. He has also completed the General Manager Program at Harvard Business School. With 20 years of experience in the financial sector he has previously held several senior positions in the industry, including the role of Assistant Manager of European Equities at the Abu Dhabi Investment Authority (ADIA). Al Hameli is the Director General of the Department of Finance.

Share on:
What are the Department of Finance’s (DoF’s) key contributions toward achieving the Vision 2030 goals? The DoF is supporting the Abu Dhabi Economic Vision 2030 via a number of strategic […]

What are the Department of Finance’s (DoF’s) key contributions toward achieving the Vision 2030 goals?

The DoF is supporting the Abu Dhabi Economic Vision 2030 via a number of strategic plans to implement an effective financial management framework and a sound fiscal policy across the Emirate. This will assist the government in strategically allocating its resources and efficiently delivering its services to the public. We introduced a financial policy practice, which provides advice on fiscal policies to the government and works to establish a unified treasury system to improve Abu Dhabi’s management of financial resources and meet international best practices. State-of-the-art information technologies are being adopted to improve the government’s management of its financial and analytical systems.

Can you explain the ethos behind DoF’s Five-Year Strategic Plan?

The strategic vision of the government of Abu Dhabi is focused on creating an attractive, secure investment climate in order to sustainably develop a strong and competitive global economy. The Emirate is committed to providing a clear vision for all government sectors to define priorities, objectives, initiatives, work methodologies, performance measures, and development tools within the public policy agenda for the management of the public sector in Abu Dhabi. As such, the DoF is working to strengthen its leading role in the government’s work system and to maintain Abu Dhabi’s financial and economic stability. The Department is also working to achieve its vision of providing prosperity and security for Abu Dhabi residents through an advanced financial framework and prudent fiscal policy. In regard to the implementation of the DoF’s strategic plan the Department has developed its tasks to better serve the Emirate of Abu Dhabi, for both citizens and entities. It operates within a holistic and integrated framework for effective financial management in accordance with the government’s vision, providing adequate funding for government initiatives including those held in partnership with private sectors, promoting the strategic use of financial resources through good performance management and monitoring, and by applying global best practices in various areas of its work.

How is the DoF committed to training its staff, and what development opportunities are on offer to department employees?

The DoF is working to build its human capabilities, and enhancing their knowledge and skills. Additionally, it has been tasked with building finance capabilities across the Abu Dhabi’s various government departments. As such, the Department, in collaboration with the Centre of Excellence in the General Secretariat of the Executive Council, devised an integrated plan to establish the DoF’s role in the training of finance staff and the development of new programs. In total, 10 financial training programs have now been established for staff working for the government of Abu Dhabi and the Department is working with universities to provide courses to employees, allowing them to enhance their work related-skills and knowledge. In addition, the DoF has also devised a plan entitled “Developmental Path,” which enables finance employees to receive professional certificates in the field of finance and accounting such as CPA, CMA, CFA, and CIA qualifications. In addition, the DoF has created a professional framework to motivate employees to engage in these programs and gain professional certifications. The DoF has also carried out a number of specialized workshops covering the government’s financial system, for executives and financial staff across various government departments. Most recently, heads of department and general managers from the Executive Council participated in a workshop entitled Government Financial System Framework in Abu Dhabi.

“ A unified treasury account system will enable the DoF to achieve the targets set by the Executive Council. “

What sort of fiscal policy are you developing for Abu Dhabi?

Fiscal policy focuses on total government revenues and spending, as well as its overall impact on the economy. The main focus in Abu Dhabi is on the spending perspective, since most of the revenue comes from oil. When spending grows too slowly, or falls, it can lead to periods of very slow economic growth, or even a recession, whereas if spending grows too rapidly, it can lead to rapid growth and possibly fuel high inflation rates. Thus, a major consideration of fiscal policy is to control spending to maintain steady growth. The other consideration is to not consistently, over a long period of time, overspend your revenues. We have recently witnessed the negative effects that countries can end up experiencing as a result of this. For instance, Abu Dhabi receives a fair amount of revenue from oil. Yet it is not endless, which means that prudent fiscal policy must take this issue into account. The DoF has recently set up a new fiscal policy directorate, which has been developing detailed fiscal plans based on macroeconomic forecasts, called Medium-Term Fiscal Frameworks, for several years now.

What are the DoF’s achievements in regard to the implementation of its performance budgeting system?

The performance budgeting system is a major project for the department, which we’ve been working on since last year. The system, which is being designed to meet international best practices, will enable the government of Abu Dhabi to link the budget with the Emirate’s performance and ensure the efficient management of resources. The Department began using the trial version of the system from January 1, 2014 to December 31, 2014, before fully implementing it across all government bodies in Abu Dhabi. For performance-based budgeting to work, a reconsideration of spending priorities and program performance need to be formally integrated into the budget process, while the next step is to connect the strategic plans of each government agency with operational plans, in order to evaluate the annual expenditure of all government bodies and keep spending in check. The ADERP system, which the DoF has already implemented across 26 government entities and plans to introduce to all government bodies by the end of 2015, will help the Department to achieve this. Through the ADERP system, the DoF will establish a unified methodology in the management of financial resources, government accounts, and budget preparation, in addition to the development and application of a uniform procurement system to raise the efficiency of financial data management and reporting. Existing cooperation between the Department and various government entities is vital to the successful implementation and preparation of the budget and financial reports.

How is the DoF progressing in its efforts to continue developing Abu Dhabi’s economy?

The DoF’s operations are centered on managing and budgeting Abu Dhabi’s finances in the best way possible, in addition to implementing sound financial policies to support the Emirate in achieving its goals and in maintaining a sustainable economic environment. The Department’s role ranges from providing the financial framework, to managing budgets and offering strategic counsel. The DoF’s activities allow the Emirate to efficiently fund projects in infrastructure, health, education and other sectors. The Department also supports Abu Dhabi’s efforts to attract both local and foreign investors. The DoF also recently announced the introduction of a new Public Debt Policy, established under the directives of the Executive Council of Abu Dhabi, which the Department feels will prove critical in terms of the ongoing development of Abu Dhabi’s economy. The new Public Debt Policy has been designed to control all borrowing by the government and by companies fully owned, or more than 50% government owned, to deliver maximum transparency and efficiency, at minimum risk.

What are the DoF’s motives behind the application of a unified treasury account system?

A unified treasury account system will enable the DoF to achieve the targets set by the Executive Council in terms of decentralization and the facilitation of payment procedures in order to be more efficient. The treasury account system, which will be governed by ADERP, also aims to encourage “financial independence” among government departments in order to maintain control over spending and budget policies. This system will allow for a gradual transition towards having decentralized financial management, by applying international best practice in the financial sector.