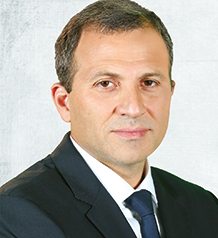 Gebran Bassil was educated at Saint-Coeurs College and the American University of Beirut, where he received his bachelor’s and master’s in civil engineering. He began his political career as an activist in the Free Patriotic Movement (FPM) before heading the political relations committee of the FPM. His official tenure at the executive level began in 2008 when he became Minister of Telecommunications, where he served for one year. He then led the Ministry of Energy and Water between 2009 and 2014. He was appointed Minister of Foreign Affairs and Emigrants in February 2014.

Share on:
TBY talks to Gebran Bassil, Minister of Foreign Affairs and Emigrants, on the critical importance of reintegrating the Lebanese diaspora, the country's oil and gas bid, and bringing some semblance of normalcy back to the region.

What were the most significant foreign policy achievements of the past year?

Our foreign policy is dominated by the diaspora. It is truly influential in the formulation and shaping of our foreign policy regarding politics and economy. We are a small country that prioritizes preserving its modernity and entity as one country united in how we are diversified. What we seek from our foreign policy is security and stability in the country. Our main messenger here is our diaspora, since it reflects the great image of Lebanon. We have been successful in terms of our performance and the progress we have made in gathering the diaspora together and making it more effective. We want to connect it with Lebanon and connect Lebanon with the world.

How would you evaluate the results of the Lebanese Diaspora Energy Conference?

It was successful—we had around 2,000 people from 100 countries participate. We launched many projects connecting them with Lebanon, setting up programs with the Lebanese Diaspora Fund to invest in Lebanese resources. We are doing this to restore the identity and nationality of Lebanese people. This is why we granted, for the first time, citizenship to Lebanese descendants through the passage of a new law. This helps solidify our identity and help people return to their roots at a time when we are currently faced with a wave of displaced Syrians who have replaced the Lebanese. It is crucial for us to bring people back to Lebanon.

What initiatives has the ministry taken to build bridges between the diaspora and the homeland?

We have continuous initiatives, but one is the restoration of citizenship. Now we have people applying for citizenship from Latin America, Africa, New Zealand, Australia, Canada, and North America. There are powerful people, including politicians, ministers, businessmen, academics, and famous people seeking citizenship. The idea that they can come to Lebanon without speaking Arabic, owning land or a house, and seek citizenship or inquire about how they can invest here or travel around Lebanon is how we are going to bring people back. We are talking about 14 million Lebanese compared to 4 million here—this is how large the diaspora is. For example, the Speaker of the House in Brazil along with 16 MPs in Brazil are of Lebanese origin. These are people with success stories in start-ups, industry, commerce, fashion, and medicine; people who invested in medical devices or found cures for diseases; people involved in electronics and robotics, even a handmade carmaker—people from all across the industrial spectrum. There is a Lebanese individual who has produced 60 luxury cars. We are setting up diaspora houses to host and receive them. While some of them do not speak the language, and might only speak Portuguese or Spanish, they still have a common identity.

What sectors are the most promising for foreign investment in the medium term?

Energy and its related fields are very promising. We will hold Lebanon’s first-ever bidding in September. Electricity and water are other important sectors, as are IT and tourism. These all require infrastructure, which is another important sector for investment. Any influx in investment in 2017 will largely depend on regional events. If summer 2017 remains uneventful, there should be large inflows and major improvements.

What are your priorities for the year ahead?

Our first priority remains the diaspora. We want to focus on bringing them back to Lebanon and granting them citizenship. We want to win the fight against terrorism, and 2018 is a reasonable year for this to be achieved, at least in Syria. We also want to see, with the new administrations and governments in Europe, a real move towards stabilization in the region. We need to get back on track to living together instead of fighting one other. There must be a comprehensive international effort to bring the region back to normality, diversity, and acceptance of one other. The eradication of borders and communities needs to stop.