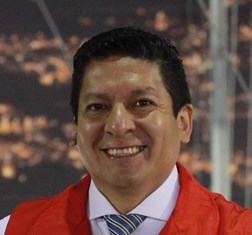 Edison Yánez is a Systems and Computer Engineer, having studied at Universidad del Ejército (ESPE), Quito. He has a Master’s in Transportation and Traffic Engineering from the Pontifical Catholic University of Ecuador (PUCE), Quito. He is a specialist in Design and Implementation of Transportation Technology by the ITS Foundation, Bogotá, and has a diploma in Traffic, Transportation, and Road Safety from Universidad Autónoma de México (UNAM), Mexico D.F. He also studied to be a Project Manager at the Escuela Politécnica Nacional (EPN), Quito.

Share on:
“The construction was assigned to Acciona, and we are also working with different metro operators from different major cities such as Madrid, Barcelona, Santiago de Chile, and Medellí­n.“

As the first subway project in Ecuador, how will the metro help create a metro culture among citizens and reduce traffic congestion?

With a 22km line and 15 stations, Quito’s transport system is taking the first step toward a large-capacity integrated system, making a great leap forward with the construction of its first metro line. Since the 2000s, the number of vehicles has grown around 15-20% annually, making the roads increasingly congested. The population has also been growing, and the city has been expanding into the surrounding valleys such that there is no delineation with other neighboring municipalities such as Mejí­a or Rumiñahuí­. In order to approach public transport in a more holistic way, Quito and nearby cities came together to create an integrated entity. The first line will be followed by planned extensions, maintenance work, and integration with other means of transports; hence, the need for an entity overseeing all this activity. We are working on instilling the metro culture in people following the example of successful cities in LATAM such as Medellí­n. In order to achieve this, we are making efforts to have a seemingless integration of systems and stations. Buses, trolleybuses, and the subway will be connected using strategic points, and there will be a single fare, meaning passengers will have to pay only once.

How would you assess the impact of having a city like Quito equipped with metro?

The construction work cost USD1.54 billion, and about USD500 million represented feasibility studies and environmental assessment. The most direct benefit of a metro line is the reduction of travel times within the city and the integration of systems so that one can travel across Quito via public transportation. We are assessing how to extend the line to Calderón and Carapungo, where there are more than 850,000 people who lack a structured public transport system. The first line will be complemented by a second line connecting the Pomasqui sector or Mitad del Mundo. Public transport investment tends to be measured by the social return. In the case of LATAM, 70% of people travel by public transport, so there needs to be public transport infrastructure that allows their mobilization. The equitable distribution of the transport infrastructure investment makes the public transport systems have an extremely high social NPV, and this will be the case in Quito when the metro starts working in 2020.

What partners have been involved in the project to make it a reality by 2020?

We have brought in experienced stakeholders so that there can be knowledge and skills transfer. The construction was assigned to Acciona, and we are also working with different metro operators from different major cities such as Madrid, Barcelona, Santiago de Chile, and Medellí­n. Over the first years of operations, the metro line will be operated by another metro company with expertise in this kind of business. The cooperation with the Medellí­n subway has been extremely fruitful, and we seek to follow some of its initiatives to create a similar metro culture in Quito and integrate our different transportation means into one system.

What is the metro’s approach to issues such as accessibility and environmental protection?

This project was conceived from the beginning with such issues and others in mind to make sure the metro that we are building today will still be a modern network in the coming decades. Regarding accessibility, proper signaling was installed from the mouth of the station to inside the trains. We propose generating a subway zone around the mouth of the station where the same concept of citizen culture can be used in terms of quality, facility, and accessibility for people with reduced mobility or any other physical limitation. With regard to environmental concerns, the Quito subway has established a reference case in Latam by transforming an anti technical modified mine into an ecological farm. We relocated more than 1.3cbm of soil to a mine on the outskirts of Quito. This mine today has been transformed into a farm that supplies meat, eggs, and milk to the area. Another point we have paid extra attention to was mobility and the passenger experience so that people are more encouraged to use the metro. There will be no independent card; anyone with a bank card with national or international contactless system will be able to use the metro directly. For those without a bank card, we have been working with financial institutions to generate metro cards that are supported by Visa or MasterCard, so apart from being used to access the metro, these cards could be used at point of sales. Additionally, the idea is to stop using cards by 2022 and replace them with telephone payments.