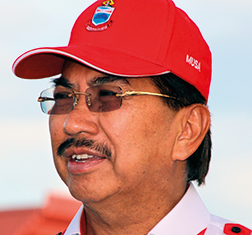 Working for a Cause

Share on:
Datuk Seri Panglima Musa Haji Aman, Chief Minister of Sabah, has been a long-standing leader of the state, both through civil service and private enterprise.

Datuk Seri Panglima Musa Haji Aman is the current Chief Minister of Sabah and the elder brother of Malaysia’s Foreign Minister, Dato’ Seri Anifah Aman. He is married with four children, and his roots in Sabah reach all the way to his birth in 1951 in the city of Beaufort, in what was then the British Crown Colony of North Borneo. After earning his Master’s of Business Administration from Edith Cowan University in Perth, Australia, Datuk Aman returned to Sabah.

Datuk Aman took over for Chong Kah Kiat as acting Chief Minister of Sabah at the beginning of March 2003, and by the end of the month that position was reaffirmed when he was sworn in as the 13th person to hold the position. Shortly after taking office, Datuk Aman began putting into action his economic and social development framework for the state of Sabah, including a renewed attention to manufacturing, agriculture, and tourism. In the 12 years since first taking the position, the state has seen dramatic growth in all three of these sectors and beyond. Under Datuk Aman’s guidance, the state has successfully devised a scheme for balancing the growth potential of manufacturing and agriculture with the obligation to preserve the territory’s natural resources through efficiency focused initiatives like Palm Oil Industrial Clusters and an austere regulatory repositioning on the role of timber in the state’s economy.

In addition to his principal role as Sabah’s Chief Minister, Datuk Aman has also served as the state’s Minister of Finance since 2004. Beyond his duties in the sphere of civil service, he was also appointed as the Pro-Chancellor of Universiti Malaysia Sabah in Kota Kinabalu.

Before first becoming active in politics in 1980, Datuk Aman played an active role in developing the private sector in Sabah, which has historically lagged behind the economic prosperity of other states in Malaysia. He began his career in Sandakan in the early 1970s, and later went on to lead organizations such as Syarikat Musman Holdings and City Finance Berhad, where he served as Chairman from 1983 to 1995.

Throughout his more than 30 years of prominent service in the public and private sectors, Datuk Amana has been awarded a number of prestigious accolades. These include honorary titles such as Seri Paduka Mahkota Brunei in 2012, Datuk Seri Panglima in 2006, Datuk Amar in 2004, and Datuk Seri in 2003. Datuk Aman became the director of the Sabah Foundation in 1995 and held the position until 1999, when he stepped down in order to run for a seat in the State Legislate Assembly election, in which he was elected by the largest majority of any of the year’s contested seats. He has also extended his civic duties to include appointments as Patron of the Sabah Bumiputera Chambers of Commerce, and Deputy President of the Sabah National Youth Association.