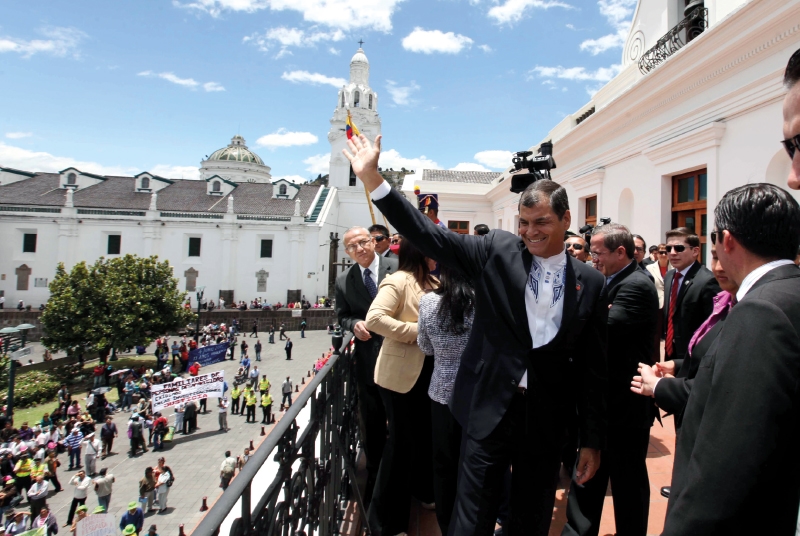 When Life Is Good

Share on:
With an eye on maintaining economic and political stability, President Correa has sought to boost the internal economy, while looking widely to engage with the country's key economic partners.

Rafael Correa, who has been referred to as Ecuador’s most effective president, has certainly come a very long way from his blue-collar upbringing. Correa, who assumed office in 2006, is now serving his third term in office. As the first president in five decades to be elected to a second term, in a country that rotated seven presidents in 10 years, Correa’s long-running tenure speaks to his political and economic success.

Correa has more than earned his reputation as a bold politician with an ambitious agenda aimed at reforming Ecuador’s institutions and bolstering the economy. With the backing of his party, the PAIS Alliance, which Correa himself founded, some of the President’s resume of accomplishments includes the enactment of a new voting system, the securing of a lucrative EU trade deal, and the ratification of a new constitution.

To some extent the new constitution, which is based on principles rooted in buen vivir, is representative of Correa’s political philosophy. Buen vivir, or “good living,” comes from the worldview of the indigenous peoples of Quechua in the Andes. Nature is recognized as exhaustable, society is recognized as pluralistic, and politics are meant to be inclusive for all citizens. With these principles in mind, Correa has adopted a development approach that is ecological, community friendly, and culturally sensitive. The constitution now features the passage, “we hereby decide to build a new form of public coexistence, in diversity and in harmony with nature, to achieve the good way of living.” Before his career in politics Rafael Correa spent much of his time as an academic. After receiving a degree in economics from the Universidad Catolica de Santiago de Guayaquil in 1987, Correa went on to earn two Master’s degrees in Arts in Economics and Science in Economics from Catholique de Louvian in Belgium and the University of Illinois at Urbana-Champaign, respectively. Then, in 2001, he earned a PhD in economics from the University of Illinois as well.

In contrast with prevailing Western economic theory, Correa campaigned on a platform of left-leaning, socialist policies that focus on poverty alleviation, regional integration, and principles of autonomy that derive from the country’s colonial past. He has also invested heavily in infrastructure projects developing roads, schools, and health clinics. Between 2007 and 2013, government expenditure toward public investment amounted to $34 billion. During this period the country’s poverty rate fell 10% in five years from 2007 to 2012. High oil prices and increased petroleum revenues have buoyed the massive increase in social spending, with $7.26 billion earmarked for public investment in 2014 alone.

Correa’s programs have subsequently benefited rural populations and slum inhabitants, who have historically been ignored by government development schemes. This has allowed the President to achieve the largest redistribution of wealth in the country’s history. Ecuador’s egalitarian strides are partly to credit for Correa’s staggering approval rating, which has steadily climbed since his inauguration, remained above 50% and peaked at 90% in April 2013, the highest approval rating in Latin America. In September of 2014, Correa’s rating stood at a favorable 83% among respondents living in Ecuador’s largest cities.

Correa continued to undertake several major economics projects in 2014. The International Monetary Fund (IMF) was welcomed back and reviewed the government’s finances. Ecuador’s debt to GDP ratio is a healthy 24%, and ratings agencies have upgraded the state’s credit standings. In June 2014, Ecuador reestablished itself in the international market and launched $2 billion in 10-year bonds. Around the same time, Goldman Sachs provided a $400 million loan that was secured by 50% of the country’s gold reserves. As well, Ecuador also launched its first digital currency under Correa’s guidance. The use of the currency will facilitate transactions and is expected to increase monetary security and transparency.

President Correa’s audacious leadership style is equally apparent in his use of soft power in foreign policy. He has been outspoken in his stance on a range of hot topic international issues, even when those issues clash with Ecuador’s largest trading partner, the US. In 2012, Julian Assange of WikiLeaks escaped extradition when Correa granted him asylum at the Ecuadorean embassy in London. The US, the UK, and Sweden levied immense international pressure on Ecuador, but Correa held his ground and reaffirmed protection for Assange in 2013. These moves were not without cost however, as the US made it a point not to renew the 22-year-old Andean Trade Preference Act. The pact allowed Ecuador preferential relief from trade duties and its cancellation is estimated to have cost the country $26 million annually in trade. In response, the government swiftly passed a new law in 2013 that allocated $23 million a year in aid to exporters.

Born into a working class family in 1961, Rafael Correa has become one of the most revolutionary figures in Ecuadorean history. In 2014, he was nominated for Best Politician of the Year by the Colombian magazine Crasel. On top of his accomplishments, he has his own TV show, speaks English, French, and Quechua, idolizes Hugo Chavez, and describes himself as a “Christian leftist.” The descendant of revolutionary, Chilean politician, Correa de Saa y Lazon, Rafel Correa has stayed true to his word, and looks set to uphold the political and economic stability that Ecuador has enjoyed during his administration.