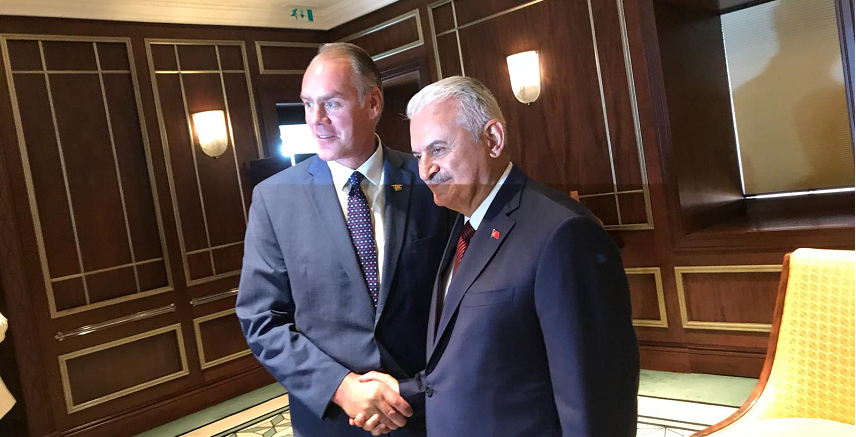 Share on:
What was discussed at the 2019 American Turkish Business Development Council conference?

A delegation of US business leaders arrived in Istanbul on Tuesday for a conference to discuss trade relations with Turkey.

But this meeting took place against the backdrop of ongoing tension between Washington DC and Ankara.

The meeting was hosted by the American Turkish Business Development Council, which helps US and Turkish firms link up and do business.

Binali Yildirim, former prime minister of Turkey, and Ryan Zinke, former US Secretary of the Interior, were the headliners at the conference held at the Four Seasons Bosphorus, and both delivered speeches that underlined the long historical ties between the two countries, both in terms of trade and as NATO members.

However, recent disagreements over policy and arms purchases from Moscow, which the US sees as Turkey’s drift towards Russia’s sphere of influence, have created tensions.

In spite of these issues, representatives from the US oil and gas, cybersecurity, and textile sectors came together to find common ground on profitable partnerships between the US and Turkey.

Already, according to the Turkish investment authority, 1,800 US companies operate in Turkey across a variety of sectors, from manufacturing to pharmaceuticals, and 8.8 percent of all foreign direct investment in Turkey comes from the US, with over USD20 billion dollars in trade in 2018.

But the unpredictability of US President Donald Trump’s attitude towards trade, and his history of beating the protectionism drum as election seasons approach, give Turkish exporters reason to be cautious.

In a diplomatic dispute over a detained US pastor in 2018, Trump slapped tariffs on Turkish steel, and sent the industry reeling along with the lira.

In January, he also tweeted an apparent threat that Turkey “will devastate [its] economy if they hit Kurds” in Syria’s ongoing civil war, but he managed to smooth over the alarming statement just hours later. Then, perhaps more helpfully for Turkish steel exporters, Trump lowered those tariffs in May.

At this week’s conference, Yildirim expressed hope for a quick resolution to the various impasses between the two countries.

“Cooperation is very important. It is essential to promote and develop bilateral relations between the US and Turkey nowadays. We need it, urgently need it, because some misinformation is going on and poisoning our bilateral relations,” Yildirim told TBY in an exclusive interview.

“We need to work closely together and concentrate on a positive agenda rather than the defense system. The problem in the Mediterranean Sea, and the Middle East and these kinds of things. These are not contributing to improve our relations. We have hope, that is why we are here, to improve our business relations including LNG energy issues, cybersecurity, recycling of textile and others. We have advantages. The US has advantages. So we can cooperate and complete each other.”

Yildirim was referring to the simmering dispute over natural gas fields in the Eastern Mediterranean, where Turkey has claimed rights to gas fields near Cyprus, an island divided since the 1970s following conflict between the Turkish and Greek communities there.

For his part, Zinke praised Turkey for its generosity in hosting 3.5 million Syrian refugees, something he said the US could never do with the same grace at similar proportions. He also cited his own history of serving in the Navy SEALs alongside Turkish soldiers in the Balkans in the 1990s. The former Montana congressional representative lamented in his speech how Americans and Washington policymakers rarely hear good things about Turkey, outside of insoluble controversies. He stressed, however, both countries can help each other in terms of energy.

“Today we are talking about the US selling gas to Turkey. When you have LNG you need shipping to deliver it. In the US, we don’t have a fleet, and the US no longer has the capability to build a fleet of ships, but Turkey does. Gasification takes pipes and steel, and Turkey produces a lot of pipe. So looking at natural gas, both countries can benefit from everything surrounding it.”

At a panel discussion later in the day, lawyers, consultants, and executives from seven different US companies presented what they could do to help Turkish companies enter the US.

“We are in the process of sourcing and providing Turkey and other countries with the opportunity to develop their infrastructure and finance the infrastructure to make it happen: the boats, the shipping and the export of it,” Cannon said.

Albert Nahas, head of international affairs at Tellurian Gas, described a doomsday scenario for global fossil fuel markets if the US does not find a buyer for its excess gas.

“If a solution is not found, meaning a transportation solution, we will have to start capping the oil production wells. Since the US is now the swing producer and world reserve, that means that world oil prices will start increasing again. That would be a major obstacle to development in countries around the world,” he said.

Turkish exploration of gas in the Eastern Mediterranean has already served to antagonize the Greeks, another NATO member.

Greece’s Prime Minister has signalled a willingness to work through the dispute, but the issue has also been straining Turkey’s relationship with its fellow NATO allies.

But the imperatives of business cannot escape the realities of politics, and there is reason to believe the US could be in store for a rapid and significant shift in foreign policy and energy policy in 2021, if Trump loses the election.

For now, the US oil and gas industry enjoys little regulatory scrutiny and the US has pulled out of the Paris Climate Accords. A diverse Turkish energy supply, under Zinke’s plan, depends on fossil fuels maintaining their uncontested supremacy in the US.

But one way or another, that won’t last forever.

Cybersecurity, however, presents brighter prospects for US-Turkish cooperation. Although it requires carbon dioxide emissions to operate, this industry does not come under US regulatory scrutiny in the way that oil and gas production does.

Even if the US shifts away from fossil fuels entirely, it will still be producing defensive and offensive innovations in cybersecurity. Next week, we will dive deeper into this focus of the meeting, and what it could mean for multiple sectors in Turkey and the US.

Like oil and gas, cybersecurity has plenty of job openings to fill, too.