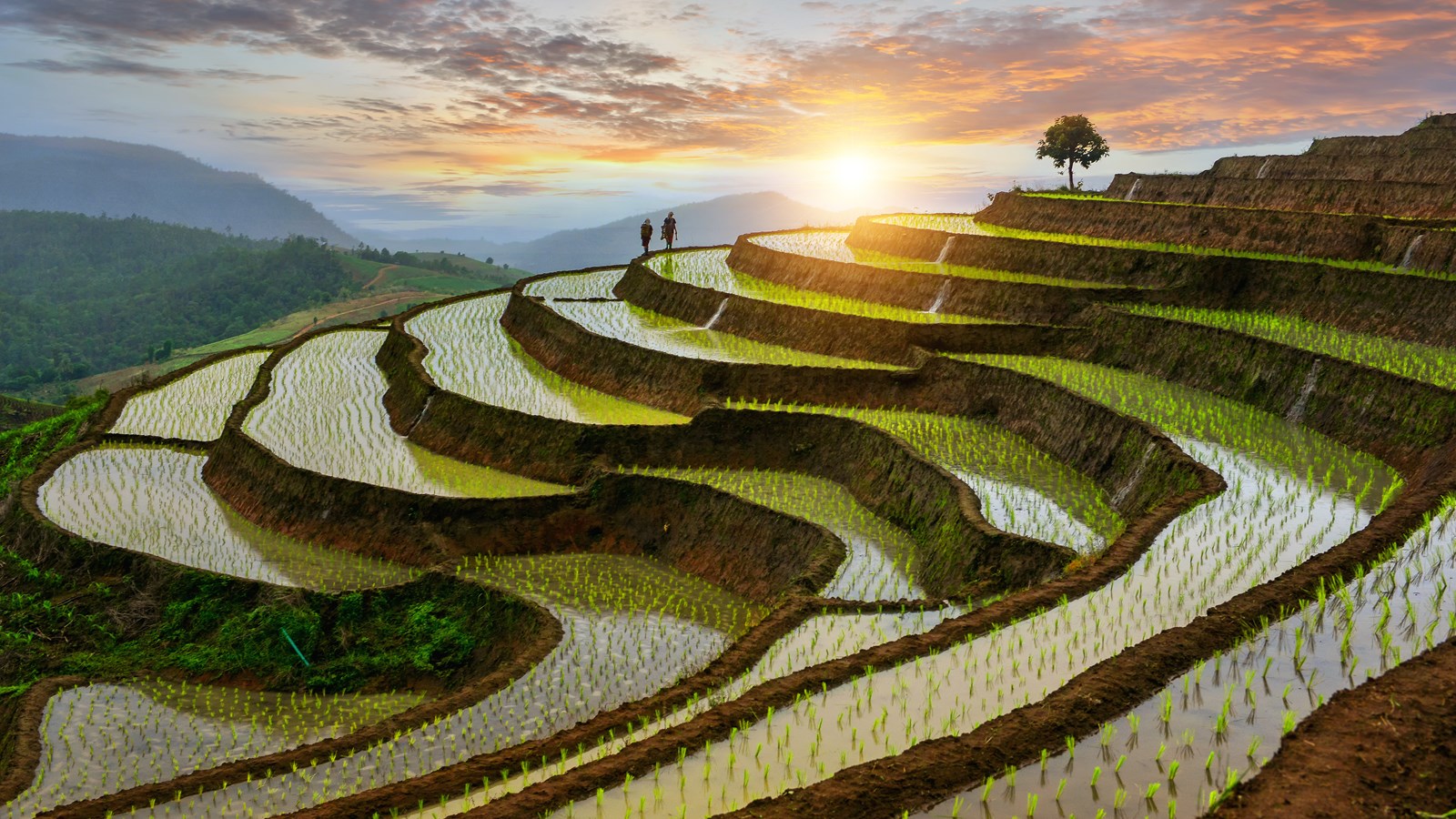 Share on:
The agriculture sector is on an upswing, finally looking forward to better days ahead after a tough few years.

Agriculture remains an integral part of Thailand and its economy—the health of its agricultural sector is believed to represent the health of the nation in general. The local economy of Thailand is a good blend of a long-established agricultural sector and a developed manufacturing and services sector. Though manufacturing and other sectors have long overtaken agriculture in terms of their contribution to GDP, agriculture continues to employ a large labor force and contributes to the country’s total exports. This sector today—including animal husbandry and fisheries—accounts for about 9% of GDP, a figure that has progressively fallen from 11.4% in 2013 to 10.2% and 9.14% in 2014 and 2015, respectively. The farming of rice, an integral part of the country’s history, economy, and culture, had for a long time employed nearly half of the total workforce. Today, approximately one-third of the 67 million population are estimated to be employed in agriculture in one way or another.

Approximately 40% of the country’s land area is used for agricultural activities. The cultivation of crops accounts for 60% of all agricultural production in the country, followed by fisheries (14%), agro-processing (11%) and animal products (9%). Thailand remains a world leader in agricultural production in a number of areas including crops, livestock, and fisheries, and is second only to China in Asia in its exports of food. In 2014, the country exported approximately USD30 billion of food products around the world to countries such as Japan, the US, China, the UK, and ASEAN. Thailand’s National Food Institute (NFI) expects the food industry to continue to grow by 17% in 2015. Its key agricultural exports include rice, rubber, canned pineapples, coconut, and sugarcane, among others, as well as seafood such as canned tuna and shrimp, and chicken and pork products. The country’s great success as a major global food producer and net food exporter is a direct result of many factors, including the abundance of resources and raw materials, its investments in technology and R&D, its commitment to global quality standards, and its skilled workforce. However, despite its historic strengths in this area, Thailand’s competitiveness in exporting agricultural and food products has been on a decline in the last few years. Total exports fell for the fourth straight month in July 2016, the Commerce Ministry had reported, with exports of agricultural commodities falling by 11.7% in 2Q2016, compared to a decline of 7.8% in the previous quarter. According to the ministry, exports of agricultural and agribusiness products fell by 18.6% MoM to $2.34 billion, largely led by rice (-35.1%), rubber (-34.8%), sugar (-33.8%), and tapioca products (-28.4%).

The future, however, is not all that gloomy, with 2Q2016 showing an improvement as the impact of the drought began to subside while agricultural prices also saw growth, leading to an increase in farm income for the first time in 10 quarters. The government has kick-started initiatives in a bid to encourage farmers to grow more lucrative crops and wean them off rice, a water-intensive crop that remains a staple of Thai cuisine. Rice cultivation uses close to two and a half times more water than that needed for wheat or corn, and with scarcer water resources and falling commodity prices worldwide, the country is looking to alternatives to breathe new life into the agricultural sector. It has allocated state funds to launch training programs for farmers to switch to animal husbandry or alternative crops that need less water to reduce the country’s overall rice production. Its aim for the 2016 planting season is 27 million tons of rice, a quarter less than the five-year average, to reduce overall output and the global oversupply of rice. In August 2016, Thailand’s cabinet approved loans to support farmers affected by drought, one of several such moves to do so in a bid to relieve some of their farming woes, including loans of THB8.6 billion to tapioca and rice farmers to help lower production costs and improve productivity. In June 2015, the state-owned Bank of Agriculture and Agricultural Cooperatives (BAAC) approved loans amounting to THB60 billion for 1 million farmers to assist with drought rehabilitation, increasing farm productivity, or supporting employment. Repayment periods were also extended in light of the extraordinary circumstances facing farmers. Similarly, in 2015 the government approved THB11.2 billion in measures to help farmers, including encouraging them to plant alternative crops and extending the period of loan repayments. The 2016 budget also identified several key areas in the agricultural sector that would receive assistance. To generate steady and sustainable incomes for farmers and create jobs in the sector, the government allocated THB70 billion toward improving efficiency in managing agricultural commodities, maintaining price stability, adding value to agricultural produces, and reducing production costs. In addition, the funds will also be used to improve land and water resources for sustainable enhancement in productivity and utilization and encourage agricultural knowledge transfer to communities to develop skills in the production of plants, seeds, and factors of production. In addition, THB23.6 billion will be allocated to strengthening the agricultural production base, improving production efficiency, upgrading storage facilities for agricultural produce, and developing quality strains of rice. In order to promote agricultural-based products and the food industry, the 2016 budget has also set aside THB4.4 billion, with an emphasis placed on food safety and production processes, the development of quality and standards of agricultural products, and supporting the expansion of organic products along with the necessary adjustments in infrastructure.

The influx of monetary assistance and better weather conditions ahead will give the sector a much-needed boost. The Thai economy in 2016 is projected to grow in the range of 3-3.5%, up from 2.8% a year ago, the Office of the National Economic and Social Development Board (NESDB) said in 2Q2016. Part of the reason for the optimistic result is the considerable improvement in farm income seen in the first half of the year, boosted by improvements in agricultural production and key agricultural prices.