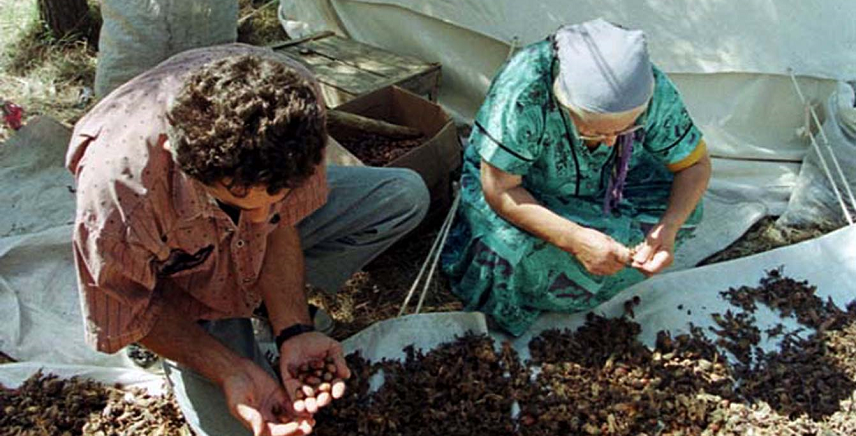 Share on:
€‹The Turkish hazelnut has long been a stalwart of the national agriculture sector, so why are exports in decline?

The hazelnut, a treasure bestowed upon Turkey by nature and essential to national horticulture, is one of the pillars of the Turkish export market.

This is not a new phenomenon. For the past 600 years Hazelnuts have been transported to other regions and Anatolia still holds the record for producing around 65-70% of global hazelnut stock annually.

The production of hazelnuts is vital to the Turkish economy and is essential for a relatively large part of the Black Sea region in Anatolia.

Over 700,000 acres of land are devoted to growing hazelnuts, and around 400,000 families, particularly in the regions of Ordu, Trabzon, Giresun, and Sakarya, are particularly dependent on it.

Even a small fluctuation in prices or lower yield numbers than expected have the potential to both create major ripples and drastically affect the economy.

In 1964 when the law of ‘guarantee of purchase’ was introduced, many local farmers in the Black Sea region turned to hazelnut production.

Over the years, Turkey has gradually turned itself into the leading hazelnut producer in the world.

Ferrero, the maker of Nutella, is the biggest buyer of Turkish hazelnuts, and supplies 65% of its yearly need from Turkey.

In 2014, the company entered the market by purchasing one of the biggest companies in the sector, Oltun Gıda, and ever since it has been acting as a market-maker.

This has created considerable discomfort among producers, as Ferrero faces accusations of manipulating hazelnut prices by creating a monopolistic market.

In 2017, the company single-handedly purchased USD341 million of hazelnuts, or about 30% of the total production.

The controversy goes as far as the Turkish Grain Board (TGB), who is responsible for calculating the prices on yearly yield and executing the ‘guarantee of purchase,’ setting prices which do not favor the farmers but rather companies such as Ferrero, Nestle, Mondelez, and Kraft Heinz Co.

Ferrero, on the other hand, has already started to look elsewhere to break Turkey’s grip on hazelnut production due to instability in the region and highly volatile prices. Barb Yates, an agronomist for Ferrero has noted that Serbia, Australia, Chile, South Africa, and the US are potential places to consider hazelnut production expansion.

With its monopoly on production, Turkey has exported hazelnuts to over 100 different countries in the past 10 years and has received more than USD20 billion from this trade.

The share of this one particular product in the broader entire Turkish economy is as high as 8%.

The trend on export figures, however, has been declining ever since 2015 when annual exports reached a record number of USD2.8 billion.

With nearly 287,000 tons of hazelnuts produced, Turkey made USD1.78 billion in exports in 2018, yet the decline perpetuates as earnings for the 2019 season—between the previous year’s September and August 2019—have stagnated at around USD1.54 billion.

Volatility and high prices seem to be the main problem for international companies who make large purchases, and the pressure of competition from overseas production is becoming fierce. As a result, these companies have turned to alternative production locations such as Italy, Azerbaijan, Georgia, and the U.S where prices are relatively cheaper due to efficiency in production and lower costs.

Moreover, the American almond has made a remarkable entrance to the international nut markets and is considered to be an alternative to the hazelnut but at 50% lower cost.

Kadir Durak, a board member of Durak Hazelnuts, lays out the problem: ”Our sector is under threat and will likely go down unless we are able to increase efficiency and decrease cost.”

The cost problem mainly stems from small farms who rely on expensive seasonal manual labor and relatively low yields which, in turn, affect sustainability and price stability negatively. Giresun Commodity Exchange President Yaşar İlbaş stated that “we need licensed warehouses for price stability which is in the interest of both producer and trader.”

The Customs and Trade Ministry pointed out similar problems in their report issued in April 2018: the negative impact on exports due to high costs and price volatility and an excessive reliance on exports and lack of domestic demand.

Solutions, as they posited in the report, include increasing annual stock by using more effective warehouse systems to fight price volatility, encouraging small farmers to produce alternative crops to hazelnuts, giving extra financial aid to hazelnut producers, increasing domestic consumption to manage the demand surplus, and subsidizing financial support for producers who live in big cities and sell their yield at lower prices.